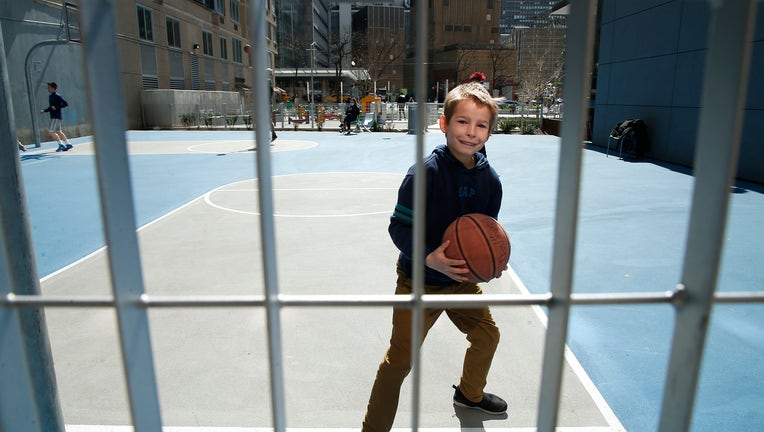 A boy plays basketball at a public playground on 1st avenue as New York City. (Photo by John Lamparski/Getty Images)

The American Academy of Pediatrics recommends children playing most sports should wear cloth face coverings during the COVID-19 pandemic. Coaches, officials, spectators and volunteers also should wear them.

The academy released its interim guidance in a news article on Dec. 4.

The guidance further stated that athletes should wear masks during training, competition, on the bench, in the locker room or traveling. Pediatricians cite evidence that athletes can wear masks and still exercise to prevent further spread of the novel coronavirus.

According to the study published in BioRxiv — an online preprint server for biology — immunity to the coronavirus infection may last for at least six months and potentially much longer.

However, doctors stated some exceptions such as during completive cheerleading, gymnastics, wrestling or playing water sports out of concerns the masks could become a hazard. Exceptions are also recommended for outdoor individual sports like golf or singles tennis.

The newsletter stated athletes should change face coverings immediately if they became saturated with sweat. Once removed, athletes should stay six feet away from other people.

If an athlete contracts COVID-19, he or she should not participate in practices or competitions. Once recovered, athletes should gradually return to the sport based on the advice from their physicians.

The COVID-19 pandemic took a tremendous toll on the world of sports. Several colleges and professional leagues have had to cancel games or seasons because of outbreaks or fears of an outbreak.

Outbreaks have disrupted more than 110 games across major college football since August — including this weekend’s regular-season finale between No. 7 Cincinnati and No. 18 Tulsa, which will instead look ahead to their matchup in the Dec. 19 American Athletic Conference title game.

With regards to the NFL, NFLPA President JC Tretter and Executive Director DeMaurice Smith held a virtual news conference on Tuesday to discuss the challenges the players have felt this season while playing during a global pandemic and address how things will change in the future.

Both Tretter and Smith said that the rules in place requiring players and staff to be tested daily, wear masks, socially distance and have tracers for contact tracing have helped prevent the spread of the virus. They believe if everyone adheres to those rules over the next two months there would be no need for teams to sequester in hotels to avoid contact with the public.

Regarding the NBA, there were 171 games canceled in the 2020 season by the coronavirus, which caused the league to suspend operations on March 11. The league sent 22 of its 30 teams to a bubble at Walt Disney World in July, with play resuming July 30 and the full 16-team playoffs going on as scheduled — though all without fans.

The board is targeting a Dec. 22 start to what would be an NBA season of 70 to 72 games, with the NBA Finals ending in June again as has been in the case for many years, according to a person with knowledge of the situation. The person, who spoke to The Associated Press on condition of anonymity because no plan has been finalized, said the possibility of fans being at games would hinge on how a particular market is faring against the coronavirus at that time.