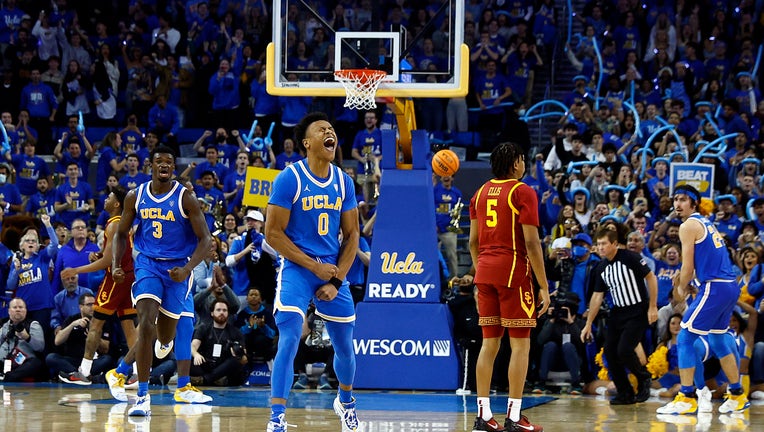 Jaylen Clark #0 of the UCLA Bruins reacts against the USC Trojans in the second half. (Photo by Ronald Martinez/Getty Images) (Getty Images)

LOS ANGELES (AP) - Jaylen Clark scored 15 points and No. 10 UCLA blew an 18-point lead in the second half before rallying to beat crosstown rival Southern California 60-58 on Thursday night for the Bruins’ 11th straight victory.

Boogie Ellis missed missed a potential tying jumper that would have forced overtime and Adem Bona grabbed the rebound to seal the win and keep UCLA undefeated at Pauley Pavilion with a 9-0 mark.

Reese Dixon-Waters scored 12 of his 16 points in the second half to lead the Trojans (11-5, 3-2). Their leading scorers, Ellis and Drew Peterson, had off-nights, with Peterson in foul trouble.

Trailing by 18, the Trojans outscored the Bruins 19-6 to open the second half. Kobe Johnson had a steal and a score and Harrison Hornery came off the bench to hit a 3-pointer that drew the Trojans within five.

UCLA starters Adem Bona and Tyger Campbell picked up their third fouls in under a minute of each other. Bona had the defensive play of the second half, blocking Malik Thomas on a dunk.

The Bruins missed 5 of 6 free throws while Dixon-Waters carried the Trojans. He scored eight of their 10 points to get USC to 56-53.

Hornery scored and got fouled on USC’s next possession. He missed the first free throw but made the second for a 56-all tie.

Jaime Jaquez Jr. missed a layup and Ellis scrambled and came up with the rebound in the clogged paint. Dixon-Waters scored to give the Trojans a 58-56 lead, their first since the start of the game.

Clark missed a 3-pointer for UCLA, but David Singleton grabbed the offensive rebound and fed Clark again. This time, he nailed it, putting the Bruins back in front, 59-58, with 14 seconds to go.

Ellis got called for an offensive foul that gave UCLA the ball back with seven seconds to go. The Trojans fouled Singleton, whose first free throw hit the iron, drawing agonized groans from the crowd. He made the second for a 60-58 lead.

The Bruins raced to an 18-4 lead to start the game, hitting four 3-pointers in the spurt that included 13 straight points. In one sequence, Clark got blocked by Peterson, grabbed the offensive rebound and made a layup. UCLA had a 9-0 run later in the half and went into the break leading 44-26.