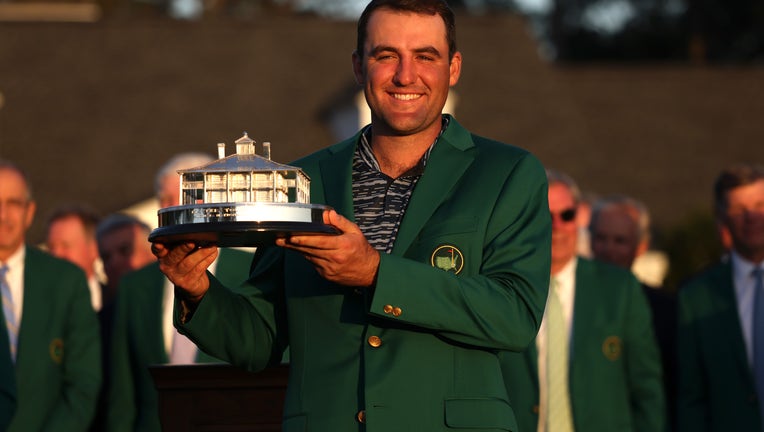 AUGUSTA, Ga. - The world’s No. 1-ranked golfer Scottie Scheffler has won the 2022 Masters.

The win marks Scheffler's first career major championship victory. Scheffler came into the day with a three-shot lead, and he made sure it held up by closing with a 1-under 71. He finished at 10-under 278 overall, winning for the fourth time in his last six tournaments.

Scheffler four-putted for a double-bogey at the final hole, but he had such a comfortable lead it didn’t matter.

"I cried like a baby this morning. I was so stressed out. I didn’t know what to do," Scheffler said after winning his first major. "I was sitting there telling (wife) Meredith, "I don’t think I’m ready for this ... and I just felt overwhelmed." 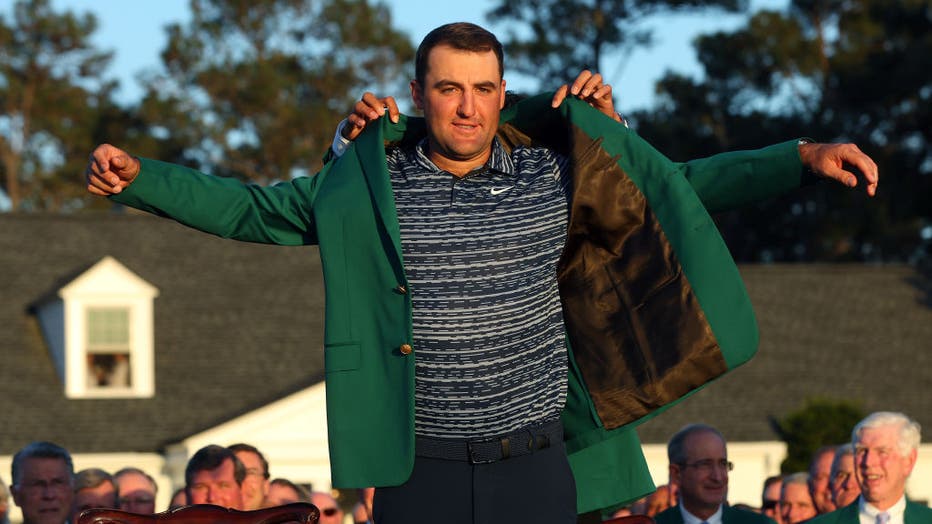 AUGUSTA, GEORGIA - APRIL 10: Scottie Scheffler is awarded the Green Jacket by 2021 Masters champion Hideki Matsuyama of Japan during the Green Jacket Ceremony after he won the Masters at Augusta National Golf Club on April 10, 2022 in Augusta, Georgi

Rory McIlroy finished three strokes behind Scheffler but ended his day at the Masters with a flourish. McIlroy, who is missing only a green jacket to complete the career Grand Slam, put together a spirited final round. His 8-under 64 included an unlikely birdie from the sand on the par-4 18th.

McIlroy’s bogey-free trip around Augusta National matched the best final round in the history of the Masters and pushed him into second place at 7 under, trailing only Scottie Scheffler.

His round included six birdies and an eagle at the par-5 13th. McIlroy’s playing partner, Collin Morikawa, followed McIlroy’s lead at the last hole, making birdie from the sand shortly after McIlroy pulled off the feat.

He felt peace between the ropes and never allowed himself to enjoy the moment until he took that famous walk up the 18th green, his ball 40 feet away and a five-shot lead.

"And you saw the results of that," he said with a laugh at his four-putt double bogey that only affected the margin of victory.

Scheffler has won three of his last five starts on the way to the No. 1 ranking.

The Aussie closed within a shot after starting the round with two straight birdies. But Scheffler chipped in for an unlikely birdie at No. 3, Smith made bogey and it wasn’t really close after that two-shot swing. 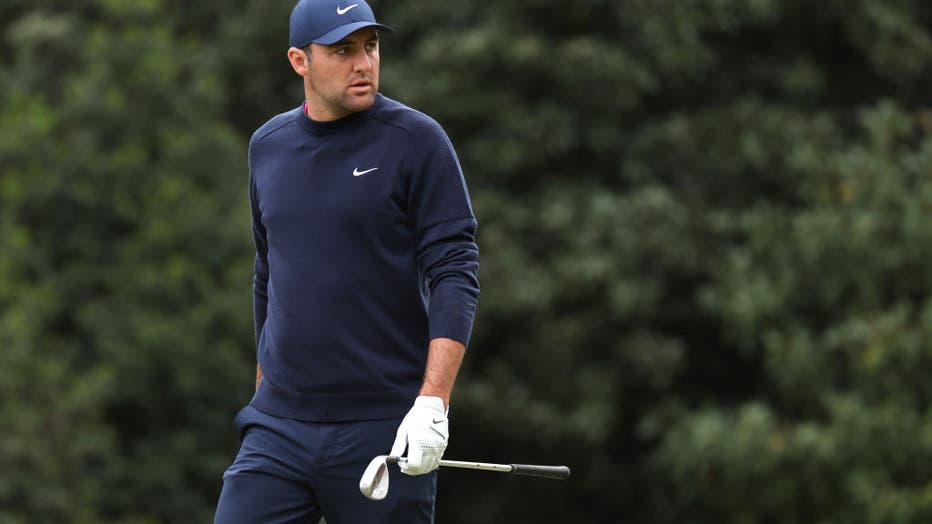 AUGUSTA, GEORGIA - APRIL 08: Scottie Scheffler looks on from the 14th green during the second round of The Masters at Augusta National Golf Club on April 08, 2022 in Augusta, Georgia. (Photo by Gregory Shamus/Getty Images)

Scheffler, built off his comfortable five-shot lead at The Masters on Saturday at Augusta National.

The 25-year-old Texan yanked his tree shot at the final hole into the towering pines left of the fairway. He found his ball but had to take a one-shot penalty for an unplayable lie.

After dropping his ball where he could take a swing, Scheffler ripped a brilliant long iron off the pine straw that sailed just a couple of feet wide of the flag, rolling off the back of the green. He putted it up next to the hole and tapped in from about 2 feet for a bogey that felt so much better.

Scheffler is at 9-under 207 after three rounds. He shot 1-under on Friday and Saturday.

Cameron Smith posted the best round of the day in very difficult conditions, a 4-under 68 for a 210 overall. The first-round leader, Sungjae Im, is the only other player within five shots of the lead at 212.

Historically, all four players who previously lead The Masters by five shots after 36 holes have gone on to win. Scheffler said he is in a good position with 36 holes to go.

"I put myself in position, where I’m in position to win this golf tournament. I couldn’t ask for anything more after 36 holes," Scheffler said. "My game feels like it’s in a good spot. I’ve just got to keep doing what I’m doing and not overthink things."

Woods' made a return to Augusta, which many felt was very unlikely following a 2021 single-car rollover crash which nearly cost him his right leg.

Blustery winds and lower than average temperatures proved to be tough for the 46-year-old Woods in the third round of the 86th Masters.

Woods was over par for a second consecutive round on Saturday, which led to his worst-ever score at the Masters, a 6-over, 78. After two more bogeys on Nos. 9 and 11, the 15-time major champion landed two consecutive birdies. But he later had a pair of bogeys on Nos. 16 and 17. Woods also had a critical double bogey on the 18th to end his round at 7 over and T-41 on the leader board.

He had a rough start on Friday, but gained from and shot 74.

He even had to take a left-handed swing at the 13th after knocking his ball onto the pine straw behind the green, right up next to an azalea.

His battered body simply ran out of steam after an electrifying 71 on Thursday, when Woods made his return to competitive golf for the first time in more than 500 days.

He grinded out a 74 on Friday, ensuring he would make the Masters cut for the 22nd time in a row.

There was nothing left in the tank for the weekend.

Still, it was a gratifying experience, one that Woods clearly didn’t regret putting himself through even if he didn’t come close to winning a record-tying sixth green jacket.

"This tournament has meant so much to me and my family," Woods said. "This is where all the great champions have ever played. They have walked these grounds."

That Woods was able to walk the course again — for four days, no less — was a feat in itself.

After his wreck in February 2021, doctors told Wood that his shattered right leg might have to be amputated. They managed to save it, but he was confined to a hospital bed for three months. He’s still got screws and rods holding the bones in place.

Woods walked Augusta National with a limp that got more and more noticeable, sometimes using a club as a walking stick to help him get around.