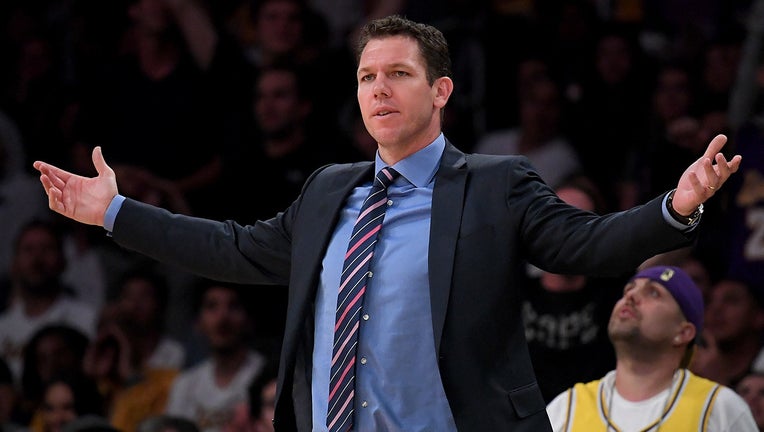 LOS ANGELES (AP) - Luke Walton is out as coach of the Los Angeles Lakers after three losing seasons.

The former Lakers forward went 98-148 after getting his first permanent head coaching job with the 16-time NBA champions. The former Golden State assistant never led the Lakers to the playoffs, not even after the arrival of LeBron James last summer.

Walton leaves three days after the Lakers' final game of their 37-45 season was upstaged by the shocking pregame resignation of Johnson, who inherited Walton when he took over the Lakers' front office in February 2017. Johnson attributed his decision in part to his desire and reluctance to fire Walton, who is close to Lakers owner Jeanie Buss.

A potential power struggle instead ended with both men out of their jobs after this wild week. Pelinka, who was hired along with Johnson, announced the move in a possible sign of the increased organizational power of Kobe Bryant's former agent.

"I want to thank Jeanie Buss and the Buss family for giving me the opportunity to coach the Lakers," Walton said in a statement issued by the Lakers. "This franchise and the city will always be special to me and my family."

Walton joined the Lakers with fanfare in 2016 after his successful tenure alongside coach Steve Kerr with the powerhouse Warriors. Walton stepped in as Golden State's interim coach when Kerr was sidelined by health issues to start the 2015-16 season, and he led the Warriors to a 24-0 start and a 39-4 record before Kerr returned to the bench.

The Lakers improved their record in each of Walton's three seasons, but never finished higher than third place in the Pacific Division. The current Lakers were the franchise's most successful team since their playoff drought began in 2013, but it wasn't enough to save Walton's job.

"I think Luke did a hell of a job with what he had, the cards he was dealt," point guard Rajon Rondo said. "The guys fought every night."

Los Angeles was in fourth place in the Western Conference at 20-14 after beating Golden State last Christmas, but James and Rondo were injured during the game. The Lakers' season fell apart during the longest injury absence of James' career, and they ended the season with nearly every important player in their young core sidelined by injuries.

Walton was tasked with one of the most difficult jobs in the NBA this season. Johnson and Pelinka gave him an oddly constructed roster of idiosyncratic NBA veterans on one-year deals playing alongside James and several talented youngsters including Brandon Ingram, Lonzo Ball, Kyle Kuzma and Josh Hart.

Walton's Lakers also were rattled by Johnson's midseason pursuit of disgruntled New Orleans forward Anthony Davis in a trade that would have resulted in a complete roster upheaval. Several Lakers acknowledged the shadowy pursuit's impact on their play.

"It affected us a lot," guard Kentavious Caldwell-Pope said. "Once the trade talk was there, the locker room changed. Everybody was pretty much worried about that, especially guys that haven't been through it. They were worried where they were going to end up."

James and the Lakers' players have been uniformly supportive of Walton, who managed to keep his team playing hard and harmoniously under the Los Angeles microscope despite multiple major injuries and distractions. Walton just couldn't coax enough wins out of the Lakers, who ruined their second-half playoff hopes with confounding losses to bottom-dwellers New York and Phoenix.

"Want to thank Luke and the rest of the coaching staff for allowing me to be me from day 1," Kuzma tweeted. "They say opportunity is everything in the league and they gave me that right from the jump."

Not many Lakers observers questioned Walton's man-management abilities, but his tactical acumen was widely criticized. Johnson and many fans had problems with everything from Walton's playing time decisions and curious rotations to his reported reluctance to add new assistants with fresh perspectives to his bench.

Despite everything, the Lakers went 15-8 in their 23 games with James, Ingram and Ball all healthy. Buss decided not to find out whether Walton could continue that progress in the fall with renewed health and a high draft pick this summer.

The Lakers' next coach will be their sixth since the retirement of Phil Jackson in 2011. Walton's 246 games in charge were the most by any coach in the tumultuous near-decade since the franchise's last championship in 2010.

Ex-Cavaliers coach Tyronn Lue, the former Lakers guard, already has been frequently mentioned as a potential replacement for Walton due to his obvious ties to James. Philadelphia assistant Monty Williams, the well-regarded former New Orleans head coach, also is expected to be a candidate.