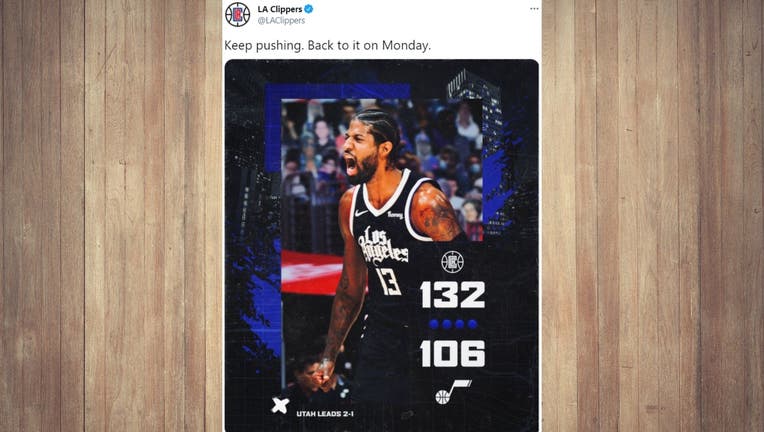 LOS ANGELES (AP) — Los Angeles Clippers coach Tyronn Lue was looking for a prime performance from both Paul George and Kawhi Leonard. They both delivered Grade A games to get Los Angeles back into its second-round series against Utah.

Leonard scored 34 points and George added 31 in the Clippers’ 132-106 victory in Game 3 on Saturday night. It is the second time both have scored at least 30 in the same playoff game, and helped No. 4 seed LA cut top-seeded Utah’s series lead to 2-1.

"We know that they are two of the best in the league," Lue said. "Like I said yesterday, I don’t go to Mastro’s to order the ketchup. I go to order the steak. And tonight, our guys want steak. That’s what we need."

"I think I just shot my shots, got the shots I’m most comfortable with and stuck with it," George said.

Leonard scored 24 points in the second half. It is his fourth career postseason game with at least 30 points, 10 rebounds and five assists. Three have come in his two seasons with the Clippers.

The big nights from Leonard and George helped offset another high-scoring game from Donovan Mitchell. The guard led Utah with 30 points, his fifth straight games with at least 30. The last player to do that was Leonard last year in the first round against Dallas.

"We kind of let them get comfortable. George hit some shots, but we can make it tougher on him and Kawhi," Mitchell said.

Reggie Jackson and Nicolas Batum added 17 points apiece for the Clippers. LA had struggled from the perimeter in the first two games but was 19 of 36 on 3-pointers with many coming on open looks.

"Shots go in or not, our job is to keep being aggressive for ourselves and others," Leonard said. "If Paul has it going, we’re going to go to him. If I got it going, it’s going to come to me. But if anybody else on the team has it going, we are going to try to get them the next shot as well."

Joe Ingles had 19 points for Utah and Jordan Clarkson added 14. The Jazz were 19 of 44 on 3-pointers, but 17 of 40 inside the arc as the Clippers’ zone defense caused problems. Utah committed 16 turnovers, which led to 24 LA points.

"I’ve said it the last two games as well. Kawhi and PG, they’re capable of really making plays and they made plays for other people. There’s going to be times where it’s tough to stop them from making shots," Utah coach Quin Snyder said. "Some of the breakdowns and the cleaner looks that they get, particularly tonight I thought in transition when we attacked the basket there’s got to be urgency to recognize that situation and really get back and show a crowd where they don’t have clear lanes to the basket."

Mitchell appeared to tweak his ankle midway through the fourth quarter and did not return to the game. Snyder and Mitchell both said that the game was out of hand by that point.

"I feel like I was able to go back, but no need to risk it down 16, 18 at that point," Mitchell said. "It doesn’t make sense to go back out there and possibly tweak it. Just rest and get ready for the next game.

Mitchell missed his first four shots, including a pair of drives to the basket, and didn’t make his first basket until there was 7:34 left in the second quarter. He then proceeded to score Utah’s next 16 points, which included four 3-pointers.

It was the first time in his last 23 games that Mitchell had gone scoreless in the first quarter.

"We just made an emphasis that he’s not going to beat us tonight," said George of Mitchell. "We’re going to force everybody else to play and we’re just not going to let him walk in shots tonight and get the looks that he wanted early tonight.

Jazz: Ruby Gobert had 12 points and 10 rebounds. ... Clarkson was assessed a Flagrant-1 foul for slapping Ivica Zubac in the face after a rebound 20 seconds into the second quarter. ... Guard Mike Conley missed his third straight game because of a mild right hamstring strain.

Clippers: LA had lost eight straight playoff games at Staples Center but has won its last two. ... Jackson had five 3-pointers, Batum added four and Luke Kennard had a pair in the second half to keep the lead in double digits.