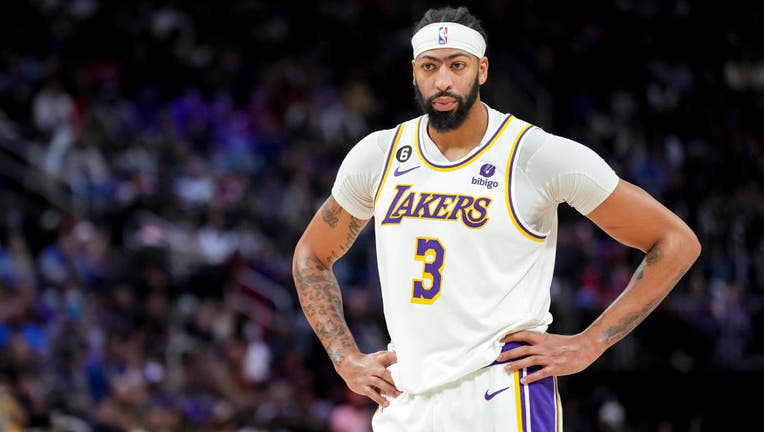 Anthony Davis #3 of the Los Angeles Lakers looks on against the Detroit Pistons at Little Caesars Arena on December 11, 2022 in Detroit, Michigan. (Photo by Nic Antaya/Getty Images) (Getty Images)

LOS ANGELES (AP) - Anthony Davis is out indefinitely with a stress injury in his right foot, the Los Angeles Lakers confirmed.

Davis will miss his fourth straight game Friday night when the Lakers host the Charlotte Hornets. He was injured last week during a win over Denver when he landed awkwardly underneath the basket.

The Lakers provided no clarity on the specific nature of Davis’ injury or a timetable for his return, saying only that updates "will be provided when appropriate."

Davis missed more than half of Los Angeles’ games due to various injuries over the previous two seasons, and the star big man’s latest significant injury is a major blow to the Lakers’ hopes of contention. Los Angeles had won 10 of 16 with Davis playing superbly over the previous 4 1/2 weeks before his current injury.

Davis is averaging 27.4 points and 12.1 rebounds this season, the best totals of his four seasons with the Lakers. He is also contributing 2.6 assists and 2.1 blocked shots per game.