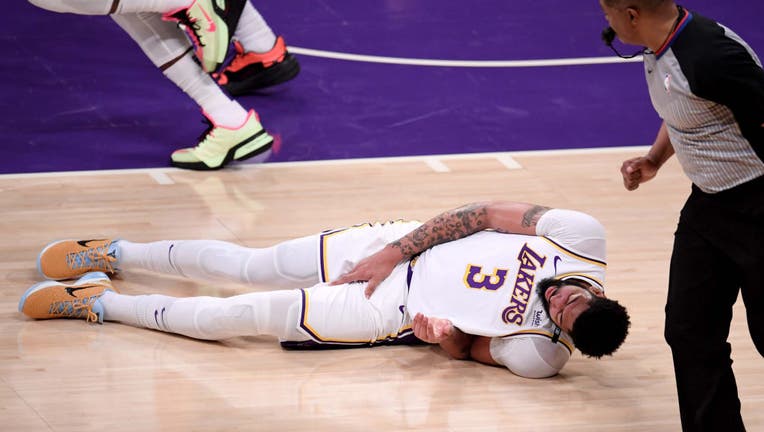 Los Angeles, CA - May 30: Anthony Davis #3 of the Los Angeles Lakers falls to the floor grabbing his leg against the Phoenix Suns in the first half of game four of the Western Conference First Round NBA Playoff basketball game at the Staples Center i

PHOENIX - Phoenix Suns coach Monty Williams initially planned to sit Chris Paul for Game 4 against the Lakers. A persistent shoulder injury had reduced the point guard to a fraction of himself, and Williams didn’t think Paul could help in a crucial game.

"He said, ‘Coach, let me start, and if you don’t think I’m looking like I normally do, then take me out and we’ll have to go in a different direction,’" Williams said. "This is one of those situations that I had to trust the player."

By the time Paul was finished orchestrating their superb second half, the Suns were headed in only one direction: back to Phoenix with a 2-2 series and greatly increased confidence in these playoff newcomers’ ability to knock off the defending champs.

Paul had 18 points and nine assists, Devin Booker and Jae Crowder added 17 points apiece and the Suns leveled the first-round series with a 100-92 victory.

Deandre Ayton had 14 points and 17 rebounds for the second-seeded Suns, who took advantage of Anthony Davis’ absence from the second half with a groin injury to reclaim home-court advantage in the series after two straight losses.

Game 5 is Tuesday night in Phoenix.

Paul was largely a non-factor in Game 3 of his first postseason with his new team, clearly struggling to put up shots with his ailing right arm. After two days in which he didn’t touch a basketball, Paul looked better in Sunday’s pregame workout — and then looked a whole lot sharper in the game, contributing 12 points and all his assists in the second half of the Suns’ first road playoff victory in over 11 years.

"Everything clicks a little better with 3 on the court and with 3 being himself," Crowder said. "I feel like we feed off of that. He’s a big part of the puzzle. It’s a little challenging when we don’t have him doing things he normally does. It’s definitely monumental that he’s out there for our team."

Paul was grateful Williams was receptive to his fervent desire to play. He also assured his teammates that he would only persevere if he could help, telling Crowder and others: "I don’t know how long it’s going to be, but if you all feel like I’m out here looking like some trash, just tell me and I’ll get out."

"I hadn’t touched a basketball or anything since the last game," Paul added. "We didn’t have a lot of guys that missed a lot of games this season, so we’re used to playing a certain way. I was just glad I could be out there and help."

The Lakers had that exact problem: Without Davis, the champs can’t play the certain way they want to — and not even LeBron James could save them this time.

Davis scored six points on 2-for-9 shooting in the first half, but didn’t return after halftime. The superstar big man scored 34 points in each of the Lakers’ two victories in the series, but he hyperextended his leg in Game 3 and then appeared to aggravate his accumulated injury woes in the second quarter of Game 4, falling awkwardly and grabbing his leg after a layup attempt defended by Crowder.

"I thought he was laboring a little bit" even before the groin injury, Lakers coach Frank Vogel said of Davis, who missed 30 games in the regular season. "He was saying that his knee was sore, but there was no way that he was not going to play. I thought he gave a heck of a run at it, trying to compete through pain."

James had 25 points and 12 rebounds for the Lakers, who fell too far behind in the third quarter while Davis was being evaluated in the locker room. Before its last-minute surge, Los Angeles struggled in the absence of starters Davis and Kentavious Caldwell-Pope, who injured his knee in Game 3.

Davis left Staples Center before the game ended for medical treatment. James will be carrying even more responsibility if Davis misses any games, but he’s ready.

"For me, it’s putting our team in position to be successful," James said. "These shoulders were built for a reason, and if it takes a little more to put on top of it, I’m ready for the challenge."

Phoenix made a 32-15 run starting shortly before halftime and encompassing the whole third, during which it held the Lakers to 15 points on 3-for-16 shooting with Davis absent.

The Suns led by 18 with less than nine minutes to play, but James led a 19-8 run and trimmed it to 95-88 with 2:40 left. Phoenix held on when Dennis Schröder missed an easy layup before Crowder hit an uncontested 3-pointer in front of the Suns’ bench with 1:23 left.