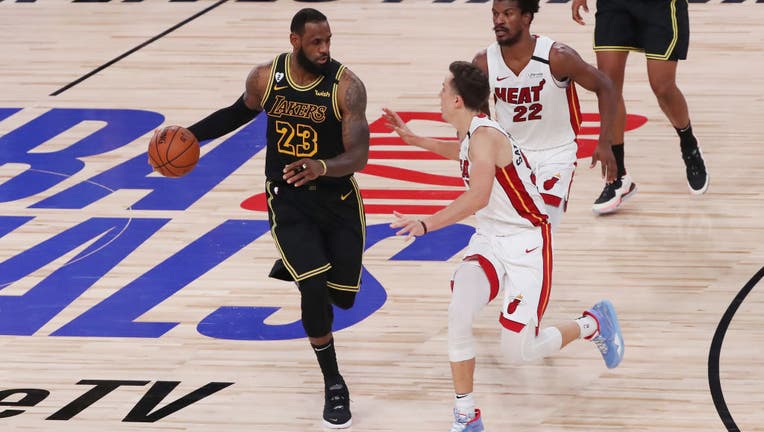 LAKE BUENA VISTA, FLORIDA - OCTOBER 09: LeBron James #23 of the Los Angeles Lakers drives the ball against Duncan Robinson #55 of the Miami Heat during the fourth quarter in Game Five of the 2020 NBA Finals at AdventHealth Arena at the ESPN Wide Worl

Sunday’s Game 6 of the NBA Finals between the Los Angeles Lakers and the Miami Heat will be the 260th of James’ playoff career, lifting him into sole possession of first place on the league’s postseason appearances list.

James is in his 17th season. After missing the playoffs in his first two seasons, he has reached the postseason 14 times in 15 years. His teams in Cleveland, Miami and now Los Angeles have gone 14-0 in first-round series with James on the roster, 11-3 in second-round series and 10-1 in the conference-final round.

He had been tied with Derek Fisher for the top spot on the playoff list with 259.

To put James’ postseason longevity into perspective, consider that 260 games is the equivalent of 3.2 full regular seasons. And out of the 4,489 players to have appeared in an NBA regular-season contest, 63% did not (or in the case of active players, have not) gotten into 260 games.

Game 6 of the finals also would be the 55th NBA Finals game of James’ career, tying him with Jerry West for fourth-most in league history. Bill Russell played in 70, Sam Jones in 64 and Kareem Abdul-Jabbar in 56.

The Lakers’ Danny Green said he and his fiancée are aware of threats being directed at them on social media after Game 5, where he missed a shot in the final seconds that could have given his team the lead and quite possibly clinched the NBA title.

Green did not seem bothered about the threats when asked Sunday.

“It’s a basketball game,” Green said. “People are emotional. Fans are emotional. I hope they don’t take it that seriously. ... I know they’re just taking out their emotions and they need somebody to blame. It came down to that last play and of course I’m the easy target.”

Miami’s Tyler Herro entered Game 6 with 20 consecutive double-digit scoring games. That’s a record for a rookie in the NBA playoffs; Alvan Adams had a 19-game run in 1976.

Herro also owns the NBA record for 3-pointers by a rookie in the playoffs, with 47 entering Sunday. Matt Maloney had 43 in 1997.

The breakdowns of offensive numbers this season outside and then inside the bubble show that on-court performance didn’t suffer at Walt Disney World.

In fact, some numbers are remarkably similar.

When the league shut down because of the coronavirus pandemic on March 11, teams were averaging 111.5 points on 46% shooting, 36% from 3-point range and 77% from the line.

The Lakers entered Game 6 of the NBA Finals having gone 73 for 204 from 3-point range through the first five games.

Those are the most 3’s made and taken through the first five games in NBA Finals history.

The mark for most 3’s made and taken through six games of the NBA Finals was set in 2016, when Golden State was 79 for 211. And the seven-game record for 3’s in the finals came that same year, when the Warriors finished 94 for 252.

James Capers, Tony Brothers and David Guthrie drew the assignment to officiate Game 6 of the NBA Finals. It was the second game for each in the series; Capers and Guthrie worked Game 2 and Brothers worked Game 3.

The NBA assigns 12 officials to the finals. Typically, the veteran referees are tabbed to work multiple games if the series extends. If that form holds this year it would suggest that Scott Foster, Zach Zarba and John Goble would be the crew if the series was to reach Game 7 on Tuesday night.