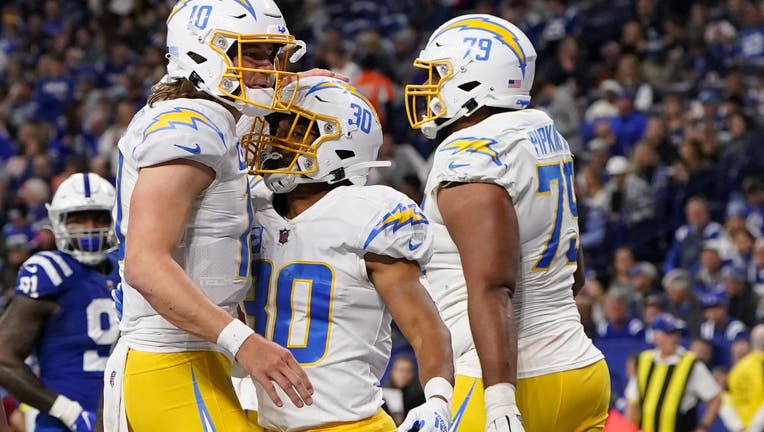 Austin Ekeler #30 of the Los Angeles Chargers celebrates after a touchdown against the Indianapolis Colts. (Photo by Dylan Buell/Getty Images) (Getty Images)

INDIANAPOLIS, Ind. (KTTV) - The Los Angeles Chargers are back in the playoffs.

The Chargers clinched a spot in the wild-card round after beating the Indianapolis Colts 20-3 on Monday Night Football.

With the win, the Chargers improve to 9-6 on the season with two more games left in the 2022 campaign. The historic win ends LA's 3-year drought in the AFC side of the playoff bracket.

The Chargers are hoping 2022 can be the bounce-back season after the team was just seconds from making last year's playoffs. LA's AFC squad could have punched a ticket to the 2021 playoffs had the team tied the Las Vegas Raiders in Week 17. But instead, a questionable time-out call by Chargers coach Brandon Staley and a late drive from the Raiders in overtime costed LA a spot in the AFC side of the playoff bracket.

With the win, the Chargers own bragging rights between the two NFL teams in LA this season as the defending Super Bowl champion Rams have been eliminated from the playoffs in the NFC side of the playoff bracket.