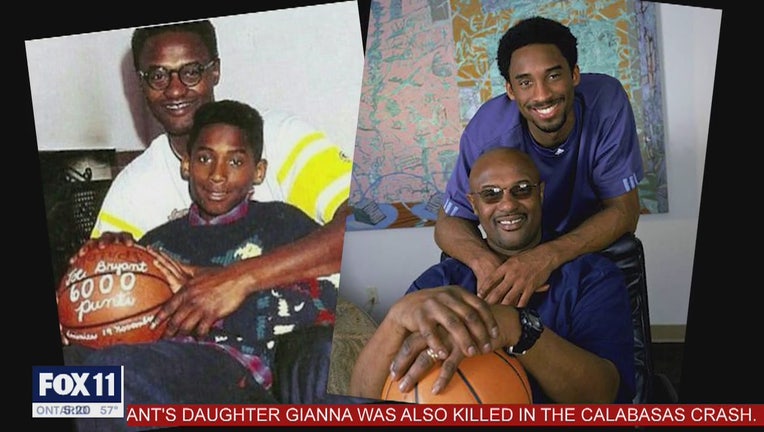 LOS ANGELES - On a franchise with an extensive list of great players, Kobe Bryant was arguably the greatest Los Angeles Laker of all.

A look back at Kobe Bryant's career

Bryant joined the team as a 17-year-old in 1996,  playing his entire 20-season career for the Lakers, becoming their all-time leading scorer and helping them to five NBA championships before retiring at the end of the 2015-16 season. He was chosen as the NBA Finals MVP for both of the last two championships.

"To spend 20 years with the same team, the team that was my dreamteam growing up as a kid, to spend my entire career wearing that golden armorhas been a huge blessing and a huge honor," Bryant said on Aug. 24, 2016, when the Los Angeles City Council declared it Kobe Bryant Day.

The date was chosen because Bryant wore the number 8 in his first 10 seasons with the Lakers and 24 for the final 10. It came one day after his 38th birthday.

Born Aug. 23, 1978, in Philadelphia and named after a type of steak his parents saw on a restaurant menu before his birth, Bryant spent eight yearsof his youth in Italy, where his father Joe was completing his playing career after spending eight seasons in the NBA.

The family returned to the Philadelphia area, where Bryant was selected as the National High School Player of the Year by USA Today in 1996 and was the leading scorer in southwest Pennsylvania history.

Bryant officially became a Laker on July 1, 1996, when the team completed a previously agreed to trade with the Charlotte Hornets, who had chosen him five days earlier with the 13th choice in the NBA draft as part ofthe trade agreement with the Lakers.

Bryant was the league's MVP in the 2007-2008 season, received All-NBAhonors 15 times, including 11 first-team selections, and was chosen to play inthe league's All-Star Game 18 times.

LeBron James moved past Bryant into third on the list Saturday when he scored his 18th point in the Lakers' 108-91 loss at Philadelphia.

In what would be his final Twitter post Saturday night, Bryant wrote: "Continuing to move the game forward @KingJames. Much respect my brother."

Bryant announced his retirement effective at the end of the 2015-16 season on Nov. 29, 2015, in a poem titled "Dear Basketball," which read:"This season is all I have left to give; My heart can take the pounding; My mind can handle the grind; But my body knows it's time to say goodbye."

Despite Bryant's brilliant individual play, his career wasn't without controversy -- both on and off the court. He was blamed by many Lakers fans for the departure of star center Shaquille O'Neal in a 2004 trade with the Miami Heat. Bryant and O'Neal didn't always get along as teammates, but they buried the hatchet years ago.

Bryant's most serious controversy came in 2003, when he was chargedwith sexual assault stemming from his encounter with a 19-year-old concierge at a mountain resort in Colorado.

The criminal case was dropped when the accuser decided not to testify, and a related lawsuit was settled out of court in 2005.

Bryant released an apology letter in which he wrote that "although I trulybelieve this encounter between us was consensual ... I now understand how shesincerely feels that she did not consent."

In 2006, Bryant and his wife in 2006 established the VIVO Foundation -- later renamed The Kobe and Vanessa Bryant Family Foundation -- intended to enhance the lives of youth and families in need and encouraging young people tostay active through sport.

The foundation partnered with the China Soong Ching Ling Foundation in2009 to establish the Kobe China Fund, his first global charitable initiative to raise funds and awareness for education and health programs.

The foundation also partnered with several Los Angeles-basedorganizations -- including Step Up on Second, My Friend's Place and the UnitedWay -- to help deal with youth homelessness.

Bryant was the honorary chair of United Way of Greater Los Angeles'Home Walk for several years. He also volunteered with the Make-A-Wish Foundation, NBA Cares and the Boys & Girls Clubs of America and was an ambassador for After-School All-Stars, which provides programs and mentors toassist students in developing skills and habits needed to succeed in life, school and their future careers.

After his NBA retirement in 2016, Bryant got involved in severalbusiness and entertainment ventures. He established Kobe Inc., headquartered inNewport Beach, to own and grow brands in the sports industry and won an AcademyAward for best animated short film in 2018 for "Dear Basketball."

In October 2018, Bryant's book "The Mamba Mentality: How I Play," was published.