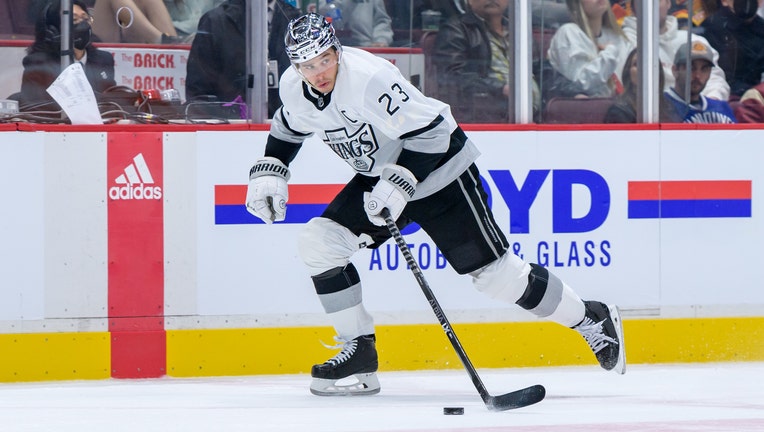 LOS ANGELES (AP) - The Edmonton Oilers have had Connor McDavid and Leon Draisaitl together for seven seasons. They’ve won exactly one playoff round in that stretch — and that was five years ago.

The Los Angeles Kings haven’t won a playoff series since they raised their second Stanley Cup in 2014, and they’re back in the postseason Monday night for the first time in four years.

Both teams desperately want to overcome their recent disappointments by recapturing the success of their franchises’ glory days. They’ve first got to get past each other in an opening-round series that pits Edmonton’s world-class offensive talent against Los Angeles’ defensive tenacity.

"I’m excited to be back, and excited for this group to be in this position and get the experience," said Kings captain Anze Kopitar, one of the three healthy remaining members of Los Angeles’ championship teams along with Jonathan Quick and Dustin Brown.

The Oilers are the higher seed, but that was also the case in their two playoff series over the previous two seasons — and both times, Edmonton was routed.

"Everyone has bought in on their side," McDavid said Sunday. "They play a really structured game and don’t give up a ton, and we certainly understand it’s going to be low-scoring games, tight checking, one-goal games."

Los Angeles chokes the neutral zone with its 1-3-1 formation and attempts to stifle all offensive creativity. The Kings’ top two centers, Kopitar and Phillip Danault, are both superb defensive players leading the effort to frustrate the Oilers, who scored a whopping 51 more goals than LA in the regular season.

"It makes a world of difference," said Kings coach Todd McLellan, McDavid’s coach for the first 3 1/2 seasons of his career in Edmonton. "Kopi has won a couple of Cups. Phil has been to the finals as recently as last year (with Montreal). ... They get game management. They get situations. It’s not just their skills. Their brain to understand what’s going on around them and anticipate is maybe their best skill."

The coaches in this series know each other well: Jay Woodcroft was McLellan’s assistant in San Jose and Edmonton.

McLellan has led a team to the playoffs for the eighth time in his 13 full seasons with three franchises. He did strong work to get the still-rebuilding Kings to this point, honing their defensive focus and coaxing a combined 100 points out of newcomers Danault and Viktor Arvidsson for an unimpressive offensive team.

While McLellan has ample playoff experience, Woodcroft is heading to his first NHL postseason after a promising start to his head coaching career. He sparked the Oilers to a 26-9-3 surge after taking over for the fired Dave Tippett in early February.

"They come from the same style of coaching," McDavid said. "Woody definitely learned a lot from Todd. I think he definitely has taken some things from Todd, but he’s put his own touch on things as well. We obviously don’t play the same system, so they believe in some different things."

The postseason is a hockey farewell for Brown, who announced his impending retirement late in the regular season. The former Kings captain has spent his entire career with Los Angeles, raising the Cup twice and establishing himself as a dependable two-way forward who plays a tremendous physical game.

Both teams have goalies who are turning back time.

Quick appeared to be nearly done with the Kings last season while playing mediocre hockey and essentially losing his starting job — which he had held since late 2008 — to Cal Petersen. The 36-year-old Quick has improbably rejuvenated his career this season, going 23-13-9 with superior numbers to Petersen while playing his unorthodox, entertaining style of netminding to perfection.

Edmonton appeared to be seeking a new goalie at the trade deadline, but couldn’t find a deal. Mike Smith has obviated those concerns down the stretch, with the 40-year-old winning nine of his final 10 games and looking quite sharp.

Darnell Nurse is a key Oilers defenseman, but he hasn’t played since getting hurt April 22. He participated in a full practice Sunday, but his status for the series hasn’t been revealed.

More crucially, the Kings must finish the season without Drew Doughty, their cornerstone defenseman and the fourth remaining member of their championship teams. The former Norris Trophy winner is out for the season after wrist surgery.

These franchises once swapped Wayne Gretzky, and the Smythe Division rivals met in the postseason seven times from 1982-92. They haven’t met in the playoffs since.

Their first postseason meeting in 1982 was highlighted by the Miracle on Manchester — Los Angeles’ comeback from a 5-0 deficit after two periods for a 6-5 overtime win in Game 3 of a series eventually won by the Kings. Gretzky then led Los Angeles to a series win in 1989 after going down 3-1 to the Oilers.