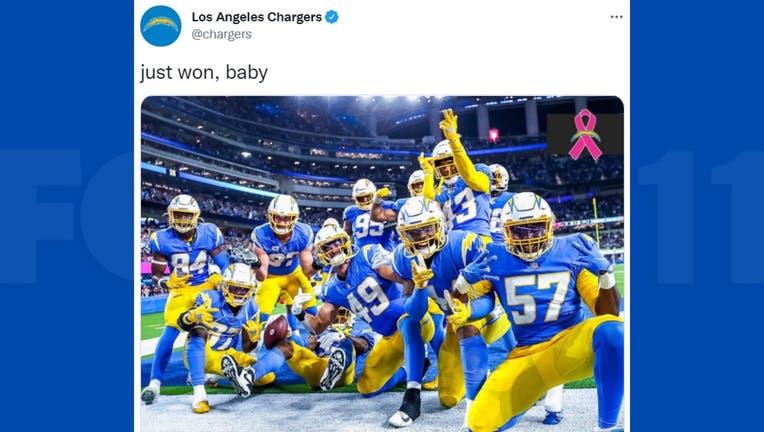 Los Angeles is 3-1 for the first time since 2014 and part of a three-way tie atop the AFC West with Las Vegas and Denver. The Raiders’ loss means the Arizona Cardinals are the NFL’s lone undefeated team after four weeks.

Herbert, who completed 25 of 38 passes for 222 yards, accounted for all of his TDs in the first half as the Chargers built a 21-0 halftime lead. The Raiders scored on their first two possessions of the second half to draw within a touchdown, but Ekeler gave Los Angeles some breathing room with an 11-yard run off left guard. Herbert had the key play of the drive with a 13-yard completion to Jared Cook on fourth-and-2 from midfield.

Ekeler, who had 145 total yards, also had a touchdown reception in the second quarter.

Derek Carr was 21 of 34 for 196 yards with two touchdowns and an interception. The Raiders could manage only 48 yards rushing against a Chargers defense that was last in the league in run defense.

The Chargers took the opening kickoff and went 75 yards in 12 plays. Herbert completed all six of his passes on the drive, including a 4 yard bullet to tight end Donald Parham in the back of the end zone to put them on top 7-0.

Los Angeles extended its lead to 21-0 at halftime by scoring on the final two drives of the first half. Herbert’s 10-yard TD to Cook was set up by a 41-yard completion to a wide open Stephen Anderson to the Raiders 12 three plays earlier.

After the Raiders went three-and-out, Herbert led the Chargers on a nine-play drive. He completed his last five passes, including a 14-yard screen to Ekeler for the score.

Las Vegas was held to one first down and 51 net yards in the first half, but made adjustments at halftime and scored on its first two possessions of the second half. The Raiders took the third-quarter kickoff and scored when Carr found Hunter Renfrow for a 10-yard touchdown.

Darren Waller then drew Las Vegas within a TD when he caught a 3-yard pass with 1:44 remaining in the third.

The Chargers Hollywood Park home has a roof over it, but the start of the game was delayed 35 minutes due to lightning strikes in the area. SoFi Stadium is classified as open-air due to the north side being open on the upper deck. Torrential rain hit the Los Angeles area nearly an hour before kickoff.

Joey Bosa recorded his 50th career sack during the first quarter when he brought down Carr for a 9-yard loss and forced a fumble that ended up being recovered by Las Vegas guard John Simpson.

Bosa, who is in his sixth season, reached it in 67 career games, faster than any Chargers player since sacks were kept as an official stat in 1982.

Raiders: Cornerbacks Damon Arnette (groin) and Trayvon Mullen Jr. (foot) were injured during the first quarter and did not return. Cornerback Nate Hobbs suffered a concussion in the second half. Tight end Derrick Carrier (pectoral) also had an injury during the first half.