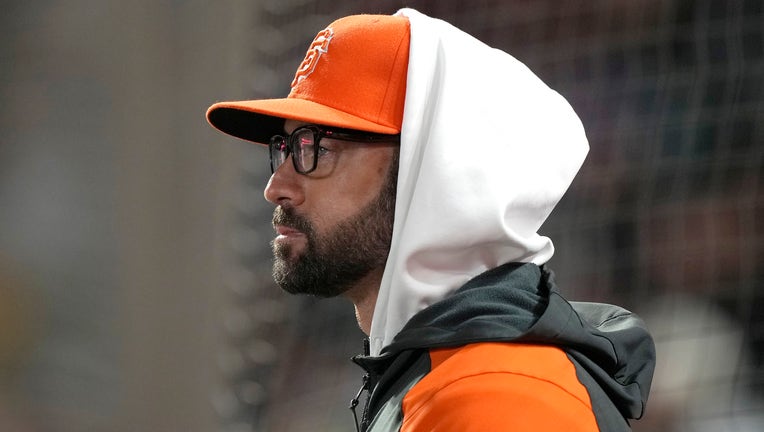 SAN FRANCISCO, CALIFORNIA - MAY 10: Manager Gabe Kapler #19 of the San Francisco Giants looks on from the dugout against the Colorado Rockies in the top of the seventh inning at Oracle Park on May 10, 2022 in San Francisco, California. (Photo by Thea (Getty Images)

CINCINNATI (AP) - San Francisco Giants manager Gabe Kapler said Friday he will refuse to take the field for the national anthem in a protest over the nation’s political direction following this week’s school shooting in Texas.

"I don’t plan on coming out for the anthem going forward until I feel better about the direction of our country," Kapler said before a series opener at Cincinnati. "I don’t expect it to move the needle necessarily. It’s just something that I feel strongly enough about to take that step."

Kapler said he needs more time to consider specific actions he might suggest be taken to prevent more tragedies of this type, such as stronger gun control laws.

Earlier in the day, he used his personal blog to discuss the deaths of 19 children and two teachers during the shooting at Robb Elementary School in Uvalde, Texas.

In a post titled "Home of the Brave," Kapler wrote: "We elect our politicians to represent our interests. Immediately following this shooting, we were told we needed locked doors and armed teachers. We were given thoughts and prayers. We were told it could have been worse, and we just need love.

"But we weren’t given bravery, and we aren’t free. The police on the scene put a mother in handcuffs as she begged them to go in and save her children. They blocked parents trying to organize to charge in to stop the shooter, including a father who learned his daughter was murdered while he argued with the cops. We aren’t free when politicians decide that the lobbyist and gun industries are more important than our children’s freedom to go to school without needing bulletproof backpacks and active shooter drills."

Kapler went on the write: "Every time I place my hand over my heart and remove my hat, I’m participating in a self-congratulatory glorification of the only country where these mass shootings take place. On Wednesday, I walked out onto the field, I listened to the announcement as we honored the victims in Uvalde. I bowed my head. I stood for the national anthem. Metallica riffed on City Connect guitars. My brain said drop to a knee; my body didn’t listen. I wanted to walk back inside; instead I froze. I felt like a coward. I didn’t want to call attention to myself. I didn’t want to take away from the victims or their families. ...

"But I am not OK with the state of this country. I wish I hadn’t let my discomfort compromise my integrity. I wish that I could have demonstrated what I learned from my dad, that when you’re dissatisfied with your country, you let it be known through protest."

Kapler’s comments came a day after the New York Yankees and Tampa Bay Rays used their social media accounts during the game between the teams to spread information about how gun violence affects American life.