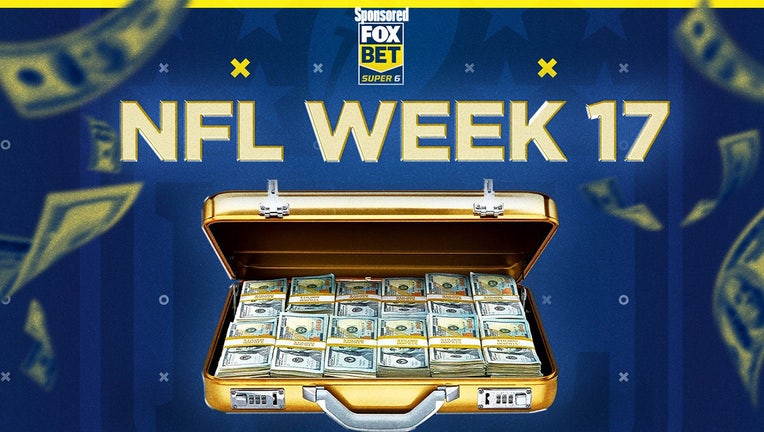 Guys, it's happening. And by it, we mean the end of the NFL regular season. Forgive us for getting too ahead of ourselves since we've still got one more week to go. But the playoff picture will be much, much clearer when Week 17 wraps.

Tom Brady and the Bucs — despite being 7-8 — are this close to clinching the NFC South. The 7-8 Lions, meanwhile, are this close to being eliminated from the postseason all together. Then there's Phenomenal Philly with its 13-2 record. The Eagles have soared all season, so now coasting into the top of the NFC should be light work for the birds.

But the gridiron will have the last word as the playoff picture takes shape. And you, too, can get in on the action at FOX Bet Super 6 as it all unfolds.

FOX Bet Super 6 is a free-to-play contest where you pick the winners of all six marquee games with their margins of victory for a chance to win $100,000 in our NFL Sunday Challenge. Just download the FOX Bet Super 6 app on your phone or mobile device, make your picks and submit your selections before the games kick off this Sunday.

It's free to play, it's easy, it's fun and people really do win!

So get ready to make your mark and win up to $100K in NFL Week 17. But before you make your picks, dive into our predictions below!

The Dirty Birds have been so bad this season, that even in an awful NFC South where the best team is 7-8, they've already managed to get eliminated from the playoff race.

Thankfully for the Falcons, the Cardinals are also a dumpster fire. However, they get a little more grace since Kyler Murray's ACL injury forced AZ into a quarterback shuffle that set the stage for Trace McSorley to get the start in Week 16.

While both these squads are having dismal seasons, the Cardinals get the edge this week. And that's because of the two, not-so-secret weapons they have in running back James Conner and wide receiver DeAndre Hopkins. Conner has rushed for 703 yards and seven touchdowns on the season, and Hop is one of four receivers to post 60 or more catches with 700 or more receiving yards this year.

At FOX Bet, the Cards are 3.5-point dogs. And you know just like we know, dogs are known to bark.

Cardinals by 8 to 10 points

When it comes to the playoffs, the 7-8 Lions statistically still have a chance, although they're currently on the outside looking in. The 3-12 Bears, on the other hand, are a bunch of lame ducks. But at least they're a fun bunch of ducks to watch.

Uber-talented Bears QB Justin Fields has made Chicago worth the price of admission. His 1,011 rushing yards rank seventh in the NFL, and he's on pace to become the fourth player all-time to have a season with 1,000 or more rushing yards while averaging over 6.5 yards per rush attempt. Unfortunately, Fields' heroics won't save them at Detroit.

A Lions' loss coupled with a Commanders win will eliminate Detroit from the playoffs. So don't expect for Dan Campbell's Hard Knocks squad to go down without a fight — especially if Jared Goff has his say. He's the only QB in the NFL since Week 9 to have 2,000 or more passing yards and fewer than five interceptions.

Lions get past the Bears easily this Sunday.

One more win and the Eagles claim the top seed in the NFC. Sounds easy enough, right? Well, at FOX Bet, they're 7-point favorites over the Saints. So according to that spread, locking down the conference should be seamless for Philly in Week 17.

But banged-up Jalen Hurts is still listed as day-to-day. Can the Eagles get past New Orleans if Gardner Minshew is under center?

Absolutely. Did you see The Mustache throw for 355 yards and three TDs on Christmas Eve against the Cowboys' defense? Sure, the Saints are only allowing opponents 15 points per game over the last four weeks, but Philadelphia is still in good shape.

Philly is averaging 29.7 points per game, and the Eagles are one of only two teams in the league boasting two or more 1,000-yard receivers.

Birds will get the W in Week 17 and clinch the NFC East and the conference.

The Panthers beat the Bucs 21-3 when they squared off in Week 7. And while we're tempted to ride with the Panthers — especially after how they dismantled the Lions last week — we don't want to underestimate the power of Tom Terrific when the season is on the line.

With a Tampa Bay loss, Tom Brady would clinch the first losing season of his career. With a win, the Bucs clinch the NFC South.

Tampa Bay will get the win.

Remember, though, that the Bucs are one of the worst teams in the league against the spread (ATS). They're 3-11-1 in that category. So expect this game to be tighter than FOX Bet's 3-point spread.

Buccaneers by 1 to 2 points

Cleveland has racked up 18 rushes of 20 or more yards this season. That's the second-most in the NFL. And running back Nick Chubb has been electric for the squad. He has rushed for 1,344 yards and 12 touchdowns.

With those kinds of stats, you'd think the Browns would be better than their 6-9 straight-up (SU) record. When it comes to their record ATS, at 7-8, they're not much better there, either. And they've already been eliminated from playoffs.

On the other side are the Commanders, fighting for their playoff lives. Carson Wentz returned to action in Week 16, completing 12-of-16 passes for 123 yards and a touchdown in his first contest since Week 6. If Wentz gets the start again, it will be up to him and superstar wide receiver Terry McLaurin to lead the Commanders to victory. A victory, by the way, that they need to stay in postseason contention.

FOX Bet has Washington favored by 1.5. We like them by at least a score.

Commanders by 8 to 10 points

The tale of two 7-8 teams that could both miss the postseason. There's hope, but both need a little help from their friends around their respective conferences to get a push into playoff position.

In other words, the stakes are high. And based on these squad's 2022 track records, it's Seattle that's ready to meet the moment.

Seahawks QB Geno Smith is tied with Patrick Mahomes and Joe Burrow for posting 11 games with two or more passing touchdowns. Geno has thrown for 3,886 yards and 27 TDs this season, keeping the Hawks relevant in the wake of trading away their Super Bowl-winning QB in the off season. Wideout DK Metcalf has also been a huge part of Seattle's success. DK has 1,005 receiving yards and six TDs this year.

Expect the 1.5-point underdog Seahawks to protect home turf with a win in front of their 12th man.

Seahawks by 4 to 5 points

How to play FOX Bet Super 6

After you download the app and submit your selections for the upcoming contest, be sure to share your picks with us by tagging @FOXSuper6 and @EricaReneeD and using the #EricaSuper6 hashtag across all social media platforms.

Download the FOX Bet Super 6 app for your chance to win thousands of dollars on the biggest sporting events each and every week! Just make your picks and you could win the grand prize. Download and play today!