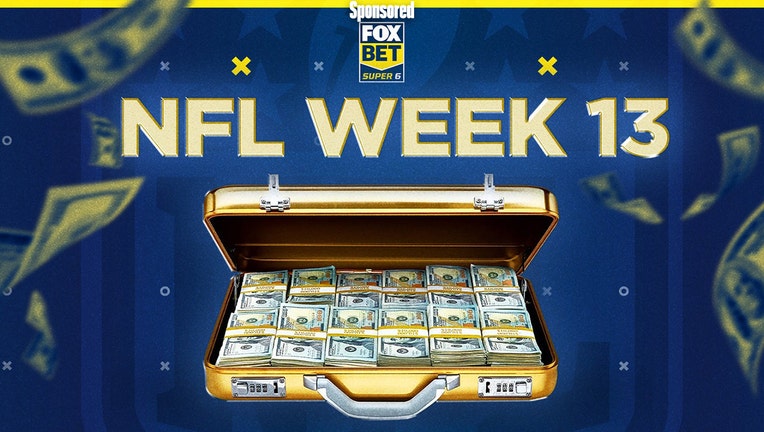 Now that another Thanksgiving is in the books, can we all agree that turkey is a third-string holiday food?

We can also agree on this: Now that we're in Week 13, it's basically do-or-die time for squads that were once near the top of the Super Bowl oddsboards (we're looking at you, Green Bay).

And there's one more point on which we all can definitely agree: Now would be a fantastic time to come up on some extra holiday cash.

FOX Bet Super 6 is a free-to-play contest where you pick the winners of all six marquee games with their margins of victory for a chance to win $100,000 in our NFL Sunday Challenge. Just download the FOX Bet Super 6 app on your phone or mobile device, make your picks and submit your selections before Sunday’s games kick off.

Terry Bradshaw's FOX Bet Super 6 jackpot could be all yours. It's free to play, it's easy, and it's fun.

Oh, and people really do win.

Before you get your picks in for the Week 13 marquee matchups, read our predictions below!

The Packers are 4-7. Just sit with that for a moment.

And the squad is struggling on both sides of the ball. Of all 32 teams, the Green Bay defense allows opponents the second-most rushing yards per game, and its offense ranks 23rd in points scored per matchup.

But even with all of that, we're backing the Pack against the Bears.

The health of Bears quarterback Justin Fields — the most explosive piece to Chicago's offense — is still uncertain. And without Fields in the lineup, the Bears don't stand a chance against an angry Aaron Rodgers.

Rodgers is 21-7 against the spread (ATS) and 23-5 straight up (SU) as a starter against the Bears in his career. So if a banged-up Aaron suits up, or even if Jordan "Lying in Wait" Love starts, expect the Pack to bounce back in Week 13.

The Jets were flying high on the strength of backup quarterback Mike White's arm when they got the W over the Bears in Week 12. White went 22-of-28, racked up 315 passing yards and threw for three touchdowns. In other words, former QB1 Zach Wilson might as well get comfy holding the clipboard.

While it's always fun to follow a Cinderella story like Mike's, it's Kirk Cousins & Co. that will get the princely win in this matchup.

The Vikings rank last in passing defense, but they make up for that shortcoming on offense. Wide receiver Justin Jefferson has been red-hot with his 1,232 receiving yards this year. Through 12 weeks, they're 9-2 SU and 5-5-1 ATS.

Don't underestimate the 7-4 Jets, though. New York ranks fourth in scoring defense and has gone 4-1 in road games. So look for Gang Green to keep it closer than the three points they're getting from the Vikes at FOX Bet.

Prediction:
Vikings by 1 to 2 points

Duval definitely has the momentum riding into this game after upsetting Lamar Jackson and the Ravens 28-27 in Week 12. Who saw that one coming?

But you also have to watch out for the Lions and their sneaky backdoor covers. They're 7-4 ATS this season. Win or lose, one thing Detroit will do is keep it interesting for 60 minutes.

Both squads rank in the bottom third when it comes to points allowed per game, but both rank in the top 10 in rushing yards.

The great equalizer in this game will be quarterback play, and Big D gets the edge with veteran Jared Goff at the helm.

Goff's 2,682 passing yards and 17 TDs are both tied for ninth in the NFL. For as much grief as Goff gets, he's not that bad — at least not on paper.

At FOX Bet, the Lions are 1.5-point favorites. We like them to win straight up and cover the spread.

Taylor Heinicke passing to superstar wideout Terry McLaurin has been magic for the Commanders. But the Giants have whipped up some magic, too, with running back Saquon Barkley. His 992 rushing yards and seven TDs have been clutch for the G-Men.

Washington has won six out of its last seven. Since Heinicke took the reins from Carson Wentz, he has gone 5-1 SU as the Commanders starting QB. The G-Men, however, have lost three of their last five, QB Daniel Jones has gotten sacked 33 times this season and the Giants' 6.7 penalties per game rank 27th.

Maybe it's our head, after all, leading us to lean towards Washington in this one.

Prediction:
Commanders by 4 to 5 points

It's an Eagles world, and we're all just living in it.

Philly running back Miles Sanders has rushed for 900 yards this year, wide receiver A.J. Brown has 831 receiving yards and QB Jalen Hurts has thrown for 17 touchdowns. The Eagles do almost everything right on offense, hence the 10-1 record.

But we can't turn a blind eye to the Titans just because they've dropped four games. Sure, they have a few blemishes on their record, but they've also got Derrick Henry toting the rock.

But Philly has the second-best defense, allowing opponents only 304.4 yards per game. So we've got the Eagles' stout defense facing off against a Titans team featuring Henry's explosiveness.

A tough spot, but we still like the Eagles to fly in Week 13.

Dolphins at 49ers (4:05 p.m. ET Sunday, FOX)Two squads at the top of their divisions and primed for playoff runs. This matchup might be our favorite of the Week 13 slate.

The Niners have the best defense in the NFL. Miami has one of the league's top-scoring offenses. San Fran has Deebo and Christian McCaffrey. The Dolphins have Tyreek.

Jimmy G & Co. are 3.5-point favorites and on a four-game winning streak. And when you really break it down, San Francisco is the most well-rounded team Miami has faced since its Week 6, 24-16 loss to the Vikings.

But moreover, this is Miami head coach Mike McDaniel's homecoming. Before Mike Mac went to South Beach, he was a part of the Niners coaching staff for five years. Also on that Dolphins squad are two former Niners running backs — Raheem Mostert and Jeff Wilson.

A contentious family reunion brewing in the Bay?

One stat that stands out to us, however, is Jimmy G's record when he's a home favorite as a starter. In that category, Garoppolo is 13-8 SU. So we're backing the Niners in a tight one.

Prediction:
Niners by 1 to 2 points

It's your turn to jump in and win some money!

After you download the app and submit your selections for the upcoming contest, be sure to share your picks with us by tagging @FOXSuper6 and @EricaReneeD and using the #EricaSuper6 hashtag across all social media platforms.