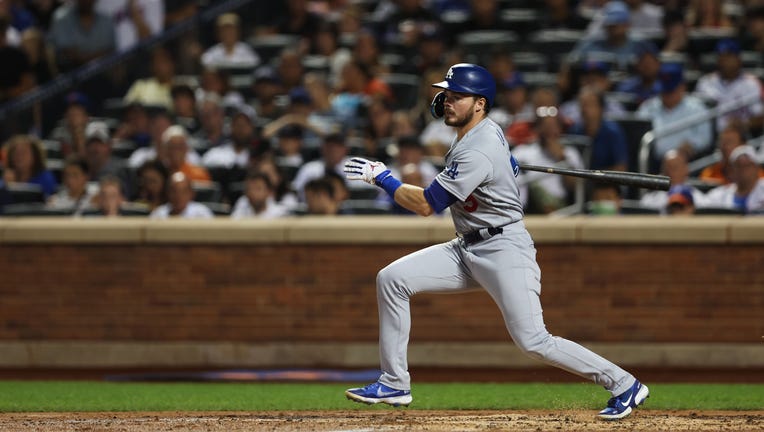 The Mets lost with Trumpet, who performs Edwin Diaz’s entrance song "Narco," at Citi Field and ready to blare away if the closer got into the game. But Diaz didn’t get in and Trumpet instead played a more muted version of "Take Me Out To The Ballgame" on his horn in front of the Dodgers’ dugout during the seventh-inning stretch.

"That’s pretty impressive," said Dodgers outfielder Joey Gallo, who was watching from the dugout. "I know I can’t play an instrument like that. That’s pretty cool."

Minutes after the Mets lost in the first major league game the Australian-born Trumpet had attended, he tweeted that he’ll be back at the ballpark Wednesday night, hoping for another chance to sound off.

"To be completely honest, I think everybody enjoys that entrance, watching it," said grinning Dodgers reliever Jake Reed, who earned his first big league save with a scoreless ninth. "Obviously, we don’t want to see it while we’re here."

Lux drove in three runs, including a tiebreaking single in the seventh inning. The hit drove in Freddie Freeman and came immediately after Joely Rodriguez (0-4) intentionally walked pinch-hitter Will Smith.

The Dodgers won despite stranding 12 runners, one shy of their season high, and leaving the bases loaded in the sixth and seventh.

"We pushed through," manager Dave Roberts said of his Dodgers, who arrived in New York early Tuesday morning following a 10-inning win over the Miami Marlins. "If you’re here, you might as well try to win the game. Our guys had that mindset and we scored enough."

Heath Hembree (3-0), making his Dodgers debut, earned the win by stranding a pair of runners in the sixth, when he whiffed James McCann for the final out.

Reed, Los Angeles’ fifth pitcher, notched the save in the ninth, when he allowed a leadoff single to Eduardo Escobar before getting Daniel Vogelbach to hit into a double play and retiring Brandon Nimmo on a comebacker.

Reed, who was claimed off waivers from the Mets in mid-July and recalled from Triple-A Oklahoma City earlier Tuesday, pumped his fists and shouted upon recording the final out.

"I’ve been up and down and all over the place, so I think any time I get to pitch in a big league game is an opportunity I don’t take for granted," Reed said. "To do it in that situation, it was obviously a little more special."

The Dodgers scored their first three runs on consecutive pitches in the third. Joey Gallo was plunked by Taijuan Walker with the bases loaded and Lux followed with a two-run single that drove in Mookie Betts — with his 100th run of the season — and Max Muncy.

"They’re not just trying to hit the home run," Walker said. "They’ll take their hits when they can and that’s what makes them dangerous."

Mark Canha hit his 100th big league homer and Starling Marte also connected for the Mets. Marte helped create a run in the first inning, when he bunted and Nimmo scored from first on pitcher Andrew Heaney’s two-base throwing error.

Francisco Lindor snapped an 0-for-20 streak with a fifth-inning single for the Mets.

Gallo started at designated hitter, batted fifth and stuck out twice in three plate appearances in his first game in New York since the Dodgers acquired him from the Yankees Aug. 2.

Gallo acknowledged a change in scenery could benefit him after he hit .159 with 194 strikeouts and a .660 OPS in 421 at-bats with the Yankees following his trade from the Texas Rangers in July 2021. He is hitting .196 with three homers, seven RBIs and an .816 OPS in his first 18 games with the Dodgers.

"It’s a tough game and you know you’re going to fail a lot," Gallo said. "Obviously, it’s different in New York. There’s going to be a lot more scrutiny and what-not — a lot more eyes and attention. Coming from Texas, not as much. I kind of do like that feeling. Our vibe here is laid-back and try to win games and try not to make it more than anything than just baseball and playing."

Gallo grinned when asked if he’d like to see the Yankees in the World Series.