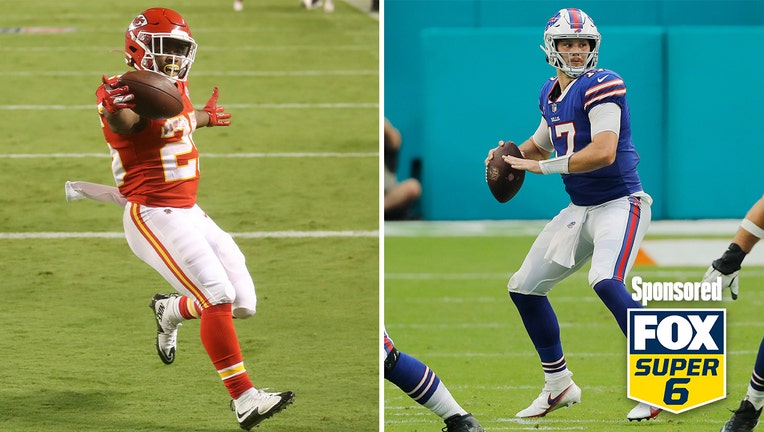 LEFT: Clyde Edwards-Helaire #25 of the Kansas City Chiefs scores a touchdown against the Houston Texans during the third quarter at Arrowhead Stadium on September 10, 2020 in Kansas City, Missouri. (Photo by Jamie Squire/Getty Images) RIGHT: Josh All

Patrick Mahomes is football royalty, complete with a Super Bowl ring. Josh Allen is making a move to get into that level.

Both will take center stage on Monday afternoon as Mahomes and the defending Super Bowl champion Kansas City Chiefs travel to Buffalo to take on Allen and the AFC East-leading Buffalo Bills in a special Monday evening (5 p.m.) edition of the NFL on FOX.

There’s a ton on the line for both – and possibly for you when you play Fox’s Super 6 game. Just download the app, answer six questions correctly and you could win up to $25,000 in Terry Bradshaw’s money.

Here’s what you should be watching out for before loading up the app and making your selections on FOX’s Super 6.

Who will score the first touchdown of the game?

Kansas City boasts of unique weapons in running back Clyde Edwards-Helaire, Travis Kelce and Tyreek Hill. The Bills have wide receiver Stefon Diggs and running back Devin Singletary. There’s also a choice for any other player/no touchdowns.

The Chiefs have struggled offensively in the first half this season, so picking Diggs and Singletary could be a great choice.

How will the first TD of in the 2nd half be scored?

As stated before, the Chiefs have been able to explode in the second half and take over games thanks in large part to Mahomes and the passing game. That’s something to keep in mind when you are making your play.

How many touchdowns will Patrick Mahomes throw in the game?

The choices range everywhere in between from zero touchdowns to five-plus touchdowns.

In every game this season, Mahomes has passed for at least two touchdowns. In fact, he’s thrown for two touchdowns in three of the last five games. Against the Bills defense, that may be a great number to play.

How many touchdowns will Josh Allen throw in the game?

The choices range everywhere in between from zero touchdowns to five-plus touchdowns.

Like Mahomes, Allen has been able to throw for at least two touchdown passes in all five games. In three of those games, however, he’s thrown for four touchdowns.

Which player will have the most total yards?

The choices for the Chiefs are RB Clyde Edwards-Helaire, TE Travis Kelce and WR Tyreek Hill while the Bills are represented by RB Devin Singletary and WR Stefon Diggs. There’s also a choice for a tie.

Tyreek Hill is the easy bet on this one because his speed outlines a major problem for the Bills to cover. However, don’t sleep on Diggs – a tough matchup in his own right.

Choose team to win & by how many points

This is a simple one: pick the winner and then find the point range that you feel the final margin of victory will be.

Both teams are coming off losses from a week ago. Kansas City hasn’t lost back to back weeks since Oct 6 and 13 of last season when the dropped games at home to Indianapolis and Houston. The Bills, meanwhile, haven’t enjoyed this high profile a matchup in a long time.

You can catch up the $25,000 if you are able to win tonight’s Super 6 jackpot. Don’t forget to download the FOX Super 6 app and take your chance at winning some of Terry Bradshaw’s money.