An emergency call came in Sunday night about a vehicle-pedestrian accident and when officers arrived at the scene they located an adult male who was hit by a vehicle, police said in a news release. 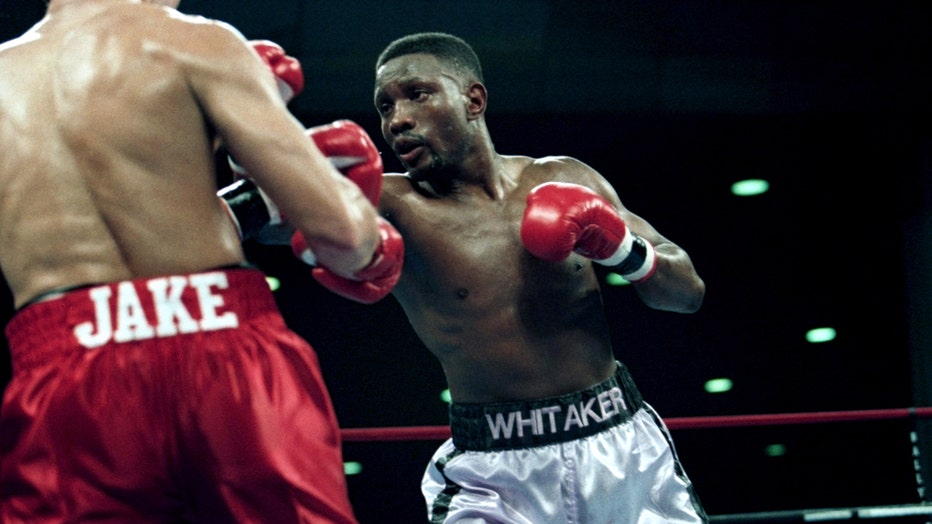 Whitaker, 55, of Norfolk, Va., was identified as the victim. Police said he died at the scene.

The driver of the vehicle stayed at the scene, police said.

"I guess he was wearing dark clothes, the road was dark and the driver didn't see him," Whitaker's son, Devon, told the Virginian-Pilot.

Police were still investigating the incident.

Tributes started to pour in for "Sweet Pea" as news broke about his death.

On my NY public access TV show "Max on Boxing" (1989-1998), I talked Pernell Whitaker more than any other fighter; it was basically the Pernell Whitaker show. He was the pound for pound best for half a decade, and one of the 3 greatest pure boxers who ever lived. RIP Sweet Pea.

-- Max Kellerman (@maxkellerman) July 15, 2019 #RIP: Pernell Whitaker, one of the greatest fighters of all-time was killed after being hit by a car last night in his hometown of Virginia Beach. Whitaker was a 1984 Gold Medalist and 4-Division Champion. He was only 55 years old. pic.twitter.com/5VNoBLeqXb

Whitaker was a four-time world boxing champion who won titles at the lightweight, light welterweight, welterweight and light middleweight.

In 1989, Ring magazine and the Boxing Writers Association of America named Whitaker the fighter of the year. Ring magazine also regarded as one of the best pound-for-pound boxers in the world from 1993 to 1997.

He holds the record for longest unified lightweight championship reign in the sport's history at six title defenses.

In 1984, Whitaker represented the U.S. in the Summer Olympics in Los Angeles. He won the gold medal in the lightweight competition defeating Luis Ortiz. He also won a gold medal at the 1983 Pan American Games in Caracas and a silver medal in the 1982 World Championships in Munich.

He was inducted into the International Boxing Hall of Fame in 2006.

He finished his career 40-4-1 with 17 knockouts. He lost his last bout via a technical knockout to Carlos Boujorquez in 2001.

After he retired from the sport, he continued on as a trainer in Virginia. He was the head trainer for former welterweight champion Zab Judah.

He is survived by his wife and five children.