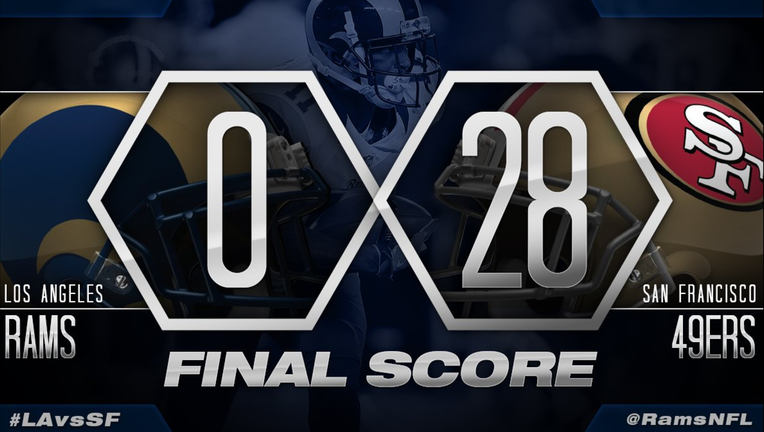 SANTA CLARA, Calif. (AP) - Carlos Hyde ran for 88 yards and two touchdowns and the San Francisco 49ers posted their first season-opening shutout in franchise history to spoil the Rams' first game since moving back to Los Angeles with a 28-0 victory Monday night.

Shaun Draughn also ran for a score and Blaine Gabbert threw a touchdown pass to Vance McDonald to help the 49ers win their first game under coach Chip Kelly in convincing fashion.

After Los Angeles football fans waited more than 21 years to once again be able to call a team their own, they need to wait at least another week to see that team score.

Case Keenum threw for just 130 yards with two interceptions, star running back Todd Gurley was held to 47 yards on 17 carries and the Rams barely even threatened the Niners as they made only 10 first downs all game.

San Francisco wasn't much better offensively but managed to run the ball fairly effectively early, leading to the two first-half touchdowns by Hyde and Draughn.

STAR EJECTION: Rams defensive lineman Aaron Donald was ejected in the fourth quarter when he made contact with an official. The infraction came after Rams linebacker Alec Ogletree gave an extra push to Gabbert following a scramble. As players on both teams started jawing, Donald pushed a 49ers player and then made contact with an official. Donald was called for two personal fouls on the play and ejected.

THIRD DOWN WOES: After converting their first third-down try on the opening drive, the Rams came up empty the next 10 times they faced a third down. They finally broke that drought when Keenum completed a 5-yard pass to Tavon Austin on third-and-4 late in the third quarter to get to the San Francisco 27. Two plays later, Keenum negated that good play by throwing his second interception of the game .

REPEAT PERFORMANCE: The 49ers opened the Kelly era in a similar fashion to the way they opened last year under first-year coach Jim Tomsula. San Francisco dominated Minnesota 20-3 in the late Monday night opener but won only four other games all season, leading to Tomsula's firing.

ANTHEM PROTEST: San Francisco's Colin Kaepernick and Eric Reid once again kneeled during the national anthem , while a few other players protested by raising their fists. Rams defensive lineman Robert Quinn and receiver Kenny Britt and Niners linebacker Eli Harold and safety Antoine Bethea all held up their fists in protest. Kaepernick came on late with the game out of hand.

DOWN DRAFT PICKS: Both the Rams and Niners traded up for first-round picks in April with Los Angeles mortgaging the future to take quarterback Jared Goff first overall and San Francisco trading back into the first round to select guard Joshua Garnett 28th. Neither player even dressed for the opener. Goff was inactive as the third QB for the Rams and Garnett is buried on the depth chart in San Francisco.

BACKWARD PASS: On the opening drive of the second half, Gabbert completed a pass to himself when his throw was deflected by T.J. McDonald and he caught it. Unfortunately for the Niners, he was quickly tackled by McDonald for a loss of 16 yards.