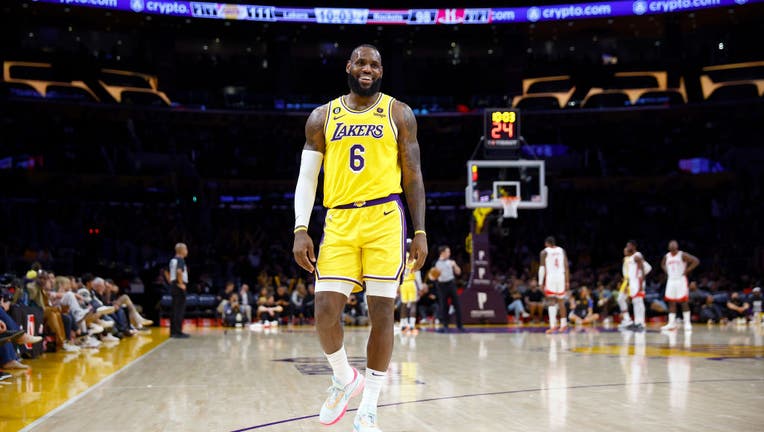 LeBron James #6 of the Los Angeles Lakers reacts during play against the Houston Rockets in the second half at Crypto.com Arena. (Photo by Ronald Martinez/Getty Images) (Getty Images)

LOS ANGELES (AP) - At a time in life when all but the world’s greatest athletes are slowing down, LeBron James has picked up speed.

James turned 38 years old on Dec. 30, deep in his 20th season in the NBA. He celebrated by scoring 47 points on his birthday in Atlanta, and the second-leading scorer in league history has been on a vintage roll ever since.

James is averaging 37.0 points, 9.7 rebounds and 8.6 assists for the Los Angeles Lakers in his seven games since turning 38. He has three 40-point performances in that stretch, including a season-high 48-point effort in a 140-132 victory over Houston on Monday night.

Older golfers take pride in shooting their age. James is nearly scoring his age against the best basketball players in the world — and even amid everything else James has done to redefine the parameters of greatness, his current surge is something special.

James is closing in on Kareem Abdul-Jabbar’s NBA career scoring record while sometimes carrying the short-handed Lakers until Anthony Davis recovers from his latest major injury, and he’s doing it all despite constant reminders of the advancement of time.

With increasing regularity, James is playing against the sons of players he faced earlier in his career, including Rockets youngsters Jabari Smith Jr. and Kenyon Martin Jr. on Monday.

"Hey, you played against my dad your first NBA game ever," Smith Jr. told James on the court in an exchange captured by NBA TV.

"It made me feel extremely old when Junior told me that," James said with a grin. "I think he even said it, like, ‘You probably feel old.’"

Both Smith Sr. and Martin Sr. were in the crowd to watch their sons — and James’ son, 18-year-old Bronny, goes to the same Los Angeles-area high school at which Martin Jr. played. James has also played against one of Bronny’s former high school teammates, Memphis’ Ziaire Williams.

"It’s just a unique thing that I’ve been able to withstand the test of time for as long as I’ve been playing, to be able to compete now versus father-and-son combinations," James said.

There are concessions to the advances of time, but they’re more about injury than age: James sat out two games since turning 38, both to rest a body with accumulated nicks including a sore left ankle.

One night before he lit up the Rockets, James scored his 38,000th career point in a 113-112 loss to Philadelphia on Sunday that left James uncharacteristically brusque and frustrated in his postgame interview. He went on Twitter on Monday to voice his disappointment with the officiating in the Lakers’ recent games, calling it "frustrating as hell man."

James admitted he was "extremely tired" Monday, and he easily could have sat out against the lowly Rockets on the back end of back-to-back games. Instead, he decided he couldn’t take a night off with the Lakers (20-24) on a three-game losing streak and sitting 13th in the 15-team Western Conference without Davis and injured rotation players Lonnie Walker and Austin Reaves.

So James played 36 minutes and scored 20 of his 48 points in the fourth quarter while continuing his career-long history of performing superbly in back-to-back situations.

"Body was sore from the battle that we had (Sunday) versus Philly," he added. "I guess once I step on the court for warmups and the crowd fills in, it’s my job to go out and play the best way I can."

James’ scoring spree is yet another reminder his career may not even be close to finished.

The victory over Houston was the 1,400th game of James’ NBA career. That’s the 11th-most in NBA history, and if he stays reasonably healthy, he’ll be within range of Robert Parish’s record of 1,611 games played at about the time his current Lakers contract expires in 2025.

That mark doesn’t include James’ 266 career postseason games, and it’s too early to tell whether he’ll be able to add to that playoff total this spring. The Lakers are outside the playoff picture for the second straight year, a fact that frustrates James tremendously.

Yet when Davis is healthy, the Lakers appear to be a postseason contender. That notion keeps James going, along with the innate fire in a player who has been driven to succeed from his first step onto an NBA court in Sacramento nearly two full decades ago.

"Ever since we made the trade for AD to bring him here, our whole thing was about health," James said. "That’s not changed. We haven’t had the best luck of health, I would say, especially this year. I can’t tell you what I want out of this ballclub (without good health)."