Henry Sayler had something to say after getting the COVID-19 vaccine in St. Petersburg. Here's a clip from FOX News Channel.

ST. PETERSBURG, Fla. - A World War II veteran who just celebrated his 100th birthday got his COVID-19 vaccine on live TV Friday. Florida Governor Ron DeSantis said at the time Henry Sayler was the one-millionth senior citizen to receive the COVID-19 vaccine in Florida, but later walked his comments back, acknowledging the state was about 200,000 short of the milestone.

During an appearance on the FOX News show FOX & Friends, Gov. Ron DeSantis lauded Henry Sayler’s service moments before the 100-year-old pulled back his sleeve for the shot on live television.

"We said seniors first. This is something we need to focus on, the 65-and-up population. There’s young healthy workers that are getting it in other states; God bless ‘em, but I want to protect our vulnerable," DeSantis said, repeating one of his frequent mantras about the pandemic.

Thursday’s Dept. of Health vaccine statistics, the most recent available, show that 749,666 people over age 65 have received at least the first dose of the two-shot vaccine. But DeSantis said the state’s reporting "lags about three days," and he identified Sayler as the likely millionth senior to get the shot.

When the report was updated later in the day, the numbers were still far short of the one-million mark. 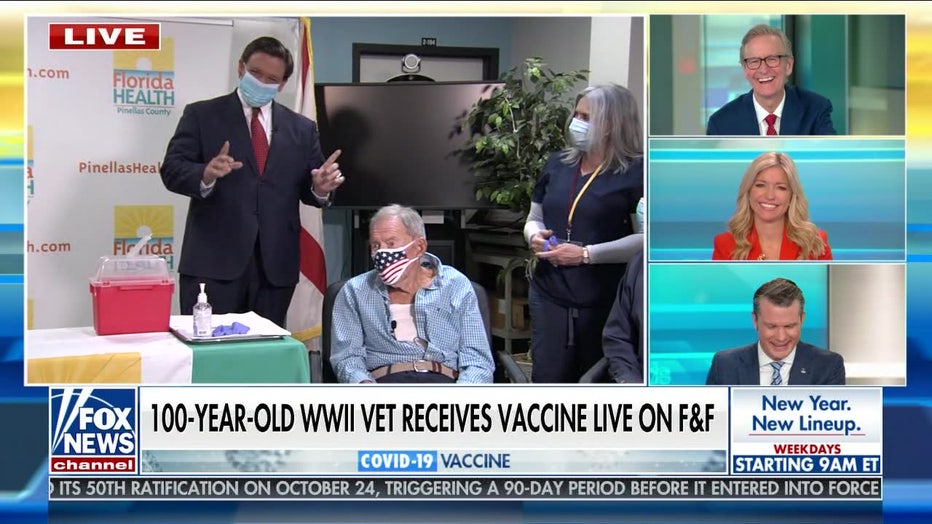 The FOX hosts thanked Sayler for his service during the live interview.

"I tell you, we were thousands of feet in the air, but we could still see people getting shot on the beaches. Some of them didn’t last very long," he recalled in an interview with FOX 13’s Jennifer Holton last week.

Sayler, who also served as a state senator from Florida and worked alongside presidents, wore an American flag mask for Friday’s event at the Department of Health in St. Petersburg. He did not react as a nurse gave him the shot.

"From his lips to God's ears, guys," DeSantis laughed.