PHILADELPHIA - Game 3 of the World Series between the Philadelphia Phillies and Houston Astros was postponed by rain Monday night with the matchup tied 1-1.

The rainout moved Game 3 to Tuesday night at Citizens Bank Park, when the weather was supposed to be all clear.

The teams worked out on the field before the tarp was put down around 5 p.m. Eastern, about three hours before the scheduled first pitch.

Game 4 will now be played Wednesday and Game 5 is set for the scheduled travel day on Thursday night. Game 5 will compete with the NFL game that has, of all teams, the Philadelphia Eagles in Houston against the Texans. 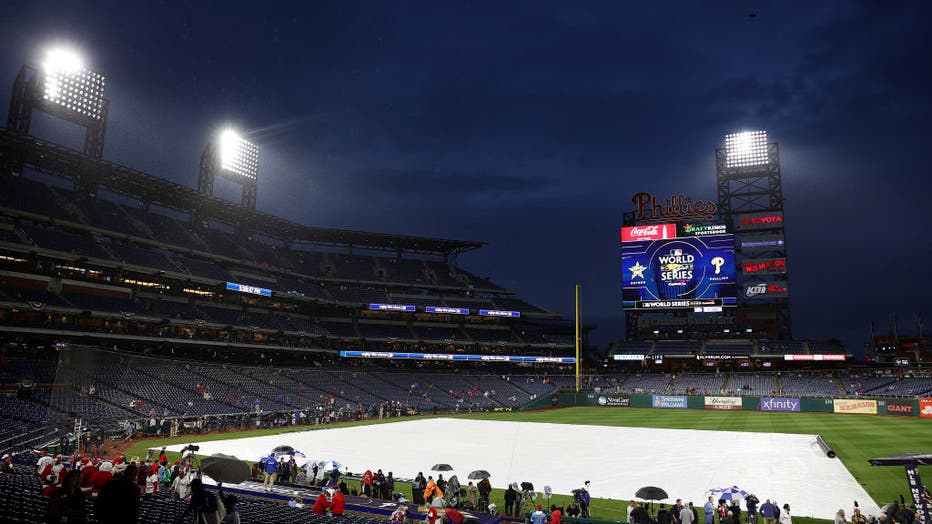 PHILADELPHIA, PENNSYLVANIA - OCTOBER 31: The tarp covers the field before the start of Game Three of the 2022 World Series between the Philadelphia Phillies and Houston Astros at Citizens Bank Park on October 31, 2022 in Philadelphia, Pennsylvania. (

After two games in Houston, the World Series had moved to Philly for Monday night and the Astros were set to send right-hander Lance McCullers Jr. against Phillies righty Noah Syndergaard.

SUGGESTED: No Dodgers in World Series leaving some fans rooting against Astros

Astros manager Dusty Baker said McCullers would remain the starter for Game 3 if there was a rainout. There was no immediate indication if Syndergaard would pitch for the Phillies.

The Astros had not named a Game 4 starter and the Phillies were going with lefty Ranger Suárez.

The Phillies clinched the NL Championship Series with a win against San Diego on a rainy, gusty Sunday. The Phillies famously won the 2008 World Series with a Game 5 victory that took three days to complete because of heavy rain.