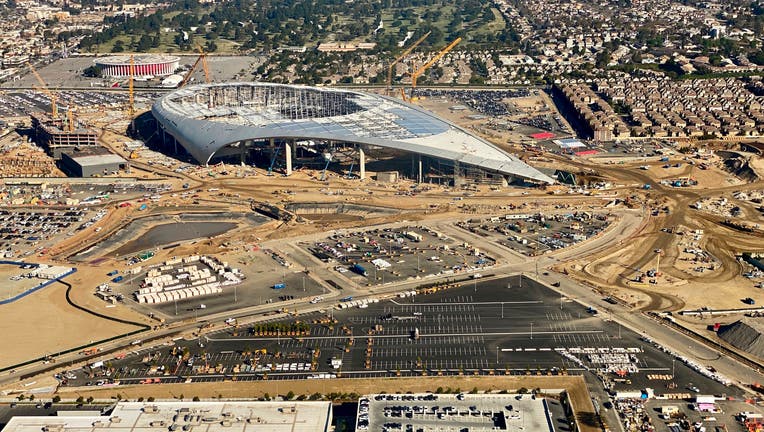 Aerial view of the SoFi Stadium, still under construction, future home of the Rams and Chargers in Inglewood, California on February 6, 2020. (Photo by Daniel SLIM / AFP) (Photo by DANIEL SLIM/AFP via Getty Images) (Getty Images)

INGLEWOOD, Calif. - Police said a worker fell to his death Friday at the new SoFi Stadium in Inglewood.

Inglewood  Police said the fall was reported around 11:44 a.m. The worker was pronounced dead at the scene.

The builder, Turner AECOM Hunt, issued a statement Friday afternoon confirming that an iron worker fell from the roof structure of the stadium this morning and died at the scene. The victim was not immediately identified.

"This is an extremely sad day. Our thoughts and prayers are with his family, friends and colleagues at this extremely difficult time. We work extremely hard to prevent days like this and we have halted all construction activity. Counseling services will be made available to all workers on site to support them in the difficult days and weeks ahead.''

The Los Angeles Times reported that the worker fell at least 60 feet while working on the roof in the southeast corner of the stadium near one of the massive concrete columns that support the structure.

The stadium on W. Manchester Blvd. is the future home of the Los Angeles Rams and Chargers football teams. It will also host Super Bowl LVI in 2022, the Summer Olympics in 2028, the College Football Playoff National Title Game, possibly a World Cup, and many other events in between.