Woman followed-home from post office, robbed at gunpoint in front of 2 daughters; 2 arrested

Two people who allegedly followed a woman home from a post office then robbed her at gunpoint while she was taking her two young daughters out of their car seats in Hancock Park were behind bars Friday.

Ashton Dwight Carter, 38, and his girlfriend, 22-year-old Teresa Whitaker, both of Los Angeles, were arrested Tuesday in connection with the brazen robbery, which occurred around 12:50 p.m. May 12 in the 300 block of South Muirfield Road, according to the Los Angeles Police Department.

According to police, the woman had been at a post office, and the suspects followed her home in a black BMW 535i. Whitaker, the suspected driver, stopped the car in the street next to the victim and Carter allegedly got out and pointed a gun at the woman and her children, demanding her watch and threatening to kill all three if she refused to comply, police said.

Carter took the woman's watch, returned to the car and the pair fled, police said.

Investigators said video from the post office caught images of Carter inside the office, closely watching the victim while she conducted her business.

According to police, investigators served a warrant at Carter's home and found the BMW 535i, along with another BMW and a Mercedes owned by Carter and Whitaker. They also allegedly found a semi-automatic handgun, jewelry and more than $56,000 in cash, but the watch taken from the woman in the May 12 heist was not found, police said. 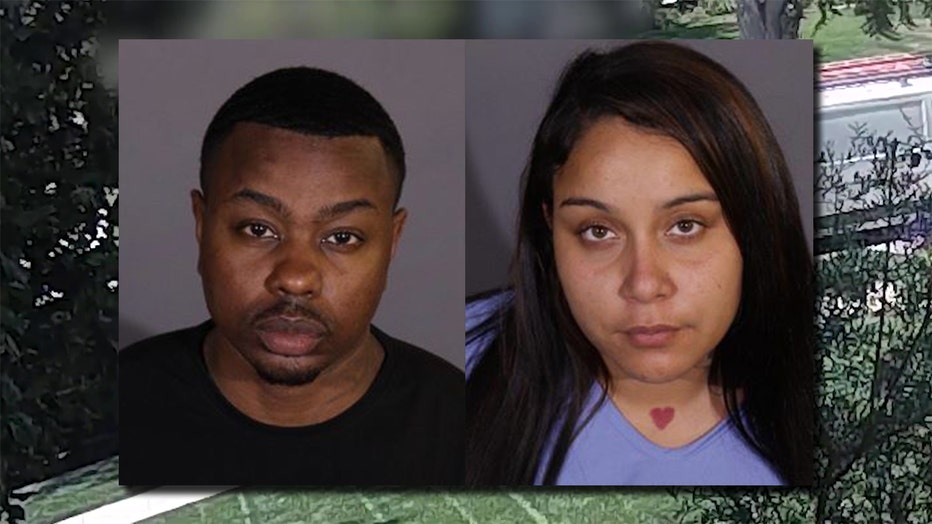 Police said Carter was on release from a prior unspecified felony arrest. He was being held in lieu of $1 million bail, according to jail records, on charges including robbery, assault with a deadly weapon and criminal threats. Whitaker was being held on $165,000 bail, facing a single count of robbery.

Police said they believe the couple has targeted other victims, and they asked anyone who may have been victimized or has information to contact detectives at 213-486-6840. Tips can also be made to Crime Stoppers at 800-222- 8477 or at rhdtipline@lapd.online.