CAPE CANAVERAL, Fla. - A SpaceX Dragon capsule is safely back on Earth after a brief but dramatic ride atop a Falcon 9 rocket this morning. The in-flight abort test appeared to show that the capsule could indeed blast free of a failing rocket and carry its astronauts to safety.

While SpaceX has been flying cargo missions to the station for years, the demonstration brings the company one step closer to its first crewed mission, and the first launch of astronauts from U.S. soil since the space shuttle program ended.

“By all accounts, this was a very successful test,” NASA administrator Jim Bridenstine announced after launch.

"It went as well as we can possibly expect," agreed SpaceX CEO and founder Elon Musk. “I’m super fired up. This is great, really great. We’re looking forward to the next step."

Musk himself had invited the public to come watch the much-anticipated test flight – “excitement guaranteed,” he tweeted – and the mission did not disappoint. 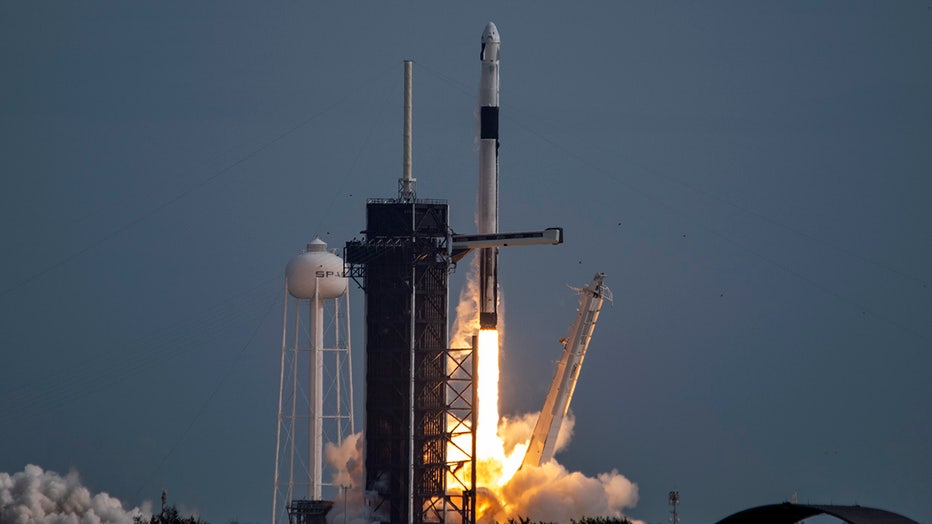 The Falcon 9 rocket lifts off on the in-flight abort mission.

The Falcon 9 rocket lifted off from Kennedy Space Center at 10:30 a.m., finding a brief hole in the cloudy skies. Less than 90 seconds later, during one of the most turbulent moments of launch, engineers commanded the spacecraft to separate from the rocket in a simulated failure. With a flash of exhaust, the Dragon capsule blasted away from the Falcon 9.

The headless rocket, meanwhile, broke up as it careened through the air and was engulfed in a fireball as its remaining fuel ignited. Though clouds obscured the blast from some viewers on the ground, the sound of the conflagration was distinctively audible minutes later. 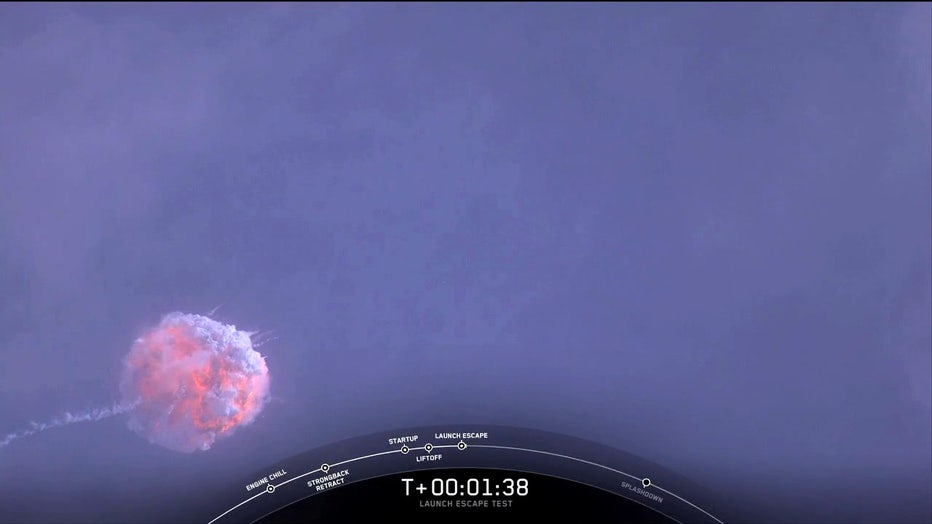 A large section of the rocket – believed to be the engines – plummeted back to Earth, announcing its arrival with a sonic boom before arriving with a splash in the Atlantic Ocean and sending up another explosion. 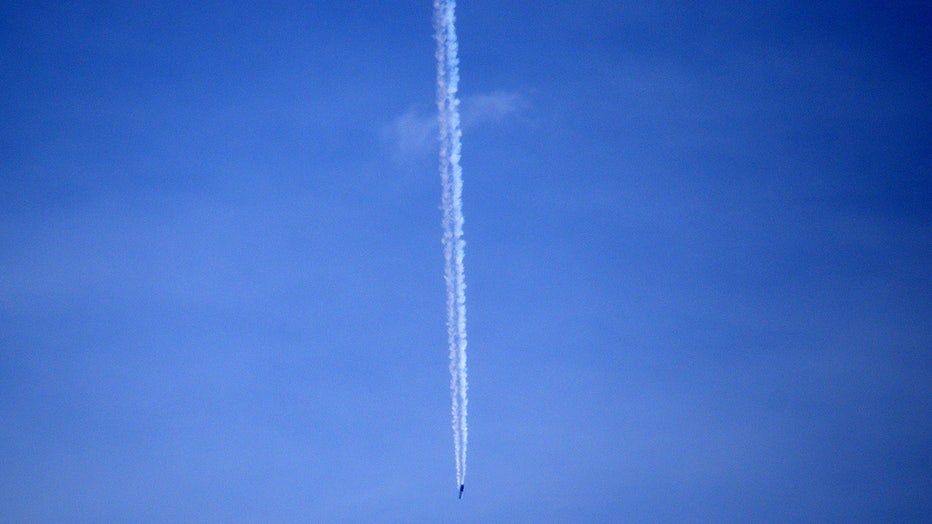 A section of the Falcon 9 rocket plummets back to Earth, seen from the press site.

The capsule, though, had a much gentler landing, dropping into the water under four parachutes – a seemingly successful test.

The crew version of Dragon debuted last year with an automated flight to and from the space station. Later, that capsule was unexpectedly destroyed in a ground test of the Draco abort engines, which made today’s test even more critical.

Should the Falcon 9 fail during a future Dragon mission, the Draco engines would similarly push the capsule free. The astronauts onboard should feel no more than 4Gs – four times the force of gravity but still less force than some roller coasters.

Such a scenario has never played out aboard an American rocket. The Mercury and Apollo capsules had escape motors that would pull the capsule free of a failing rocket, and the Gemini astronauts had ejection seats.

None were ever used during actual missions.

The space shuttle had no such escape option for astronauts if a problem developed during those early moments of flight. After the Challenger accident, a bail-out system was developed, but it required the orbiter to be level and stable after separating from its boosters and external tank.

The shuttle’s safety record was the main reason it was retired in 2011. Since then, NASA has bought seats on Russian rockets for its astronauts while SpaceX and Boeing developed their own space taxis.

SpaceX says the first crewed Dragon should be complete by the end of February, and could fly with a two-person crew before the end of summer.

“I think the United States is very much a nation of explorers,” Musk offered when asked about the meaning of the first crewed Dragon flight. “I think it will be really profound to be back in the saddle again and be launching again frequently. It should be something that matters to Americans and people worldwide.” 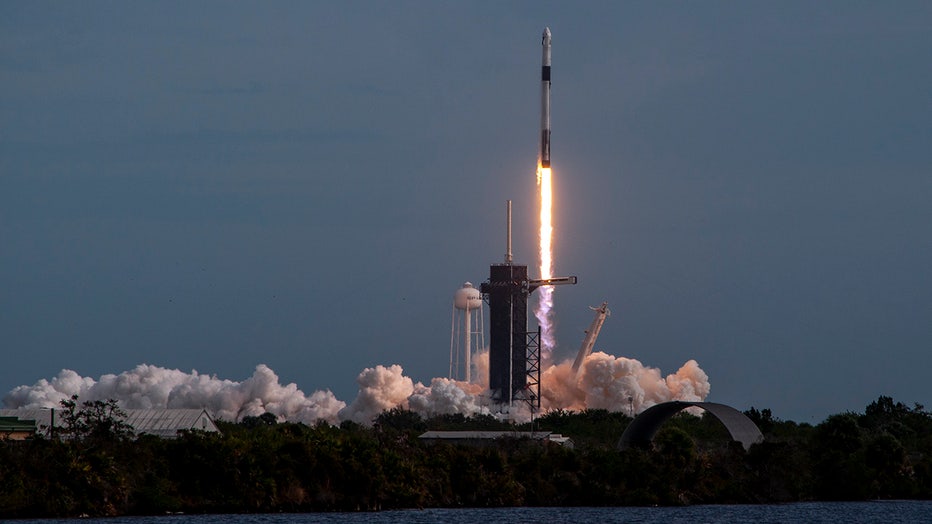 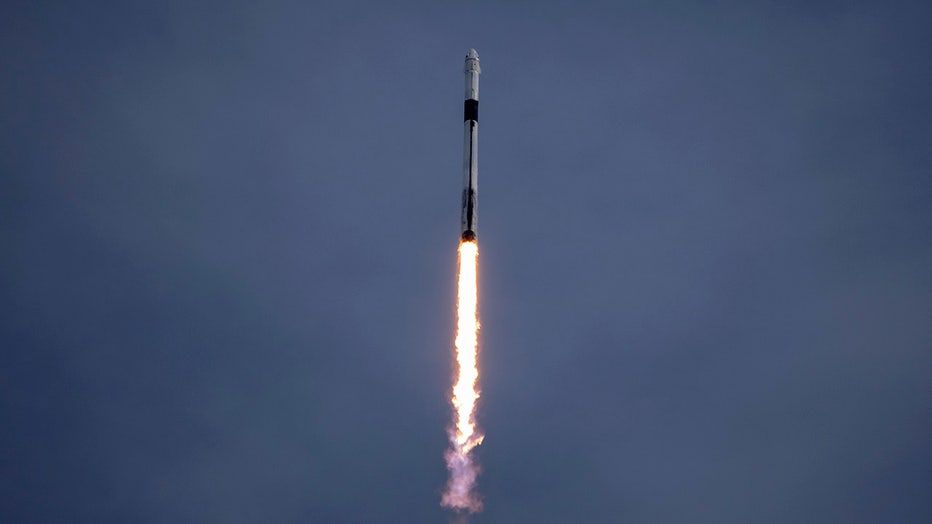 The Falcon 9 climbs away from the pad. 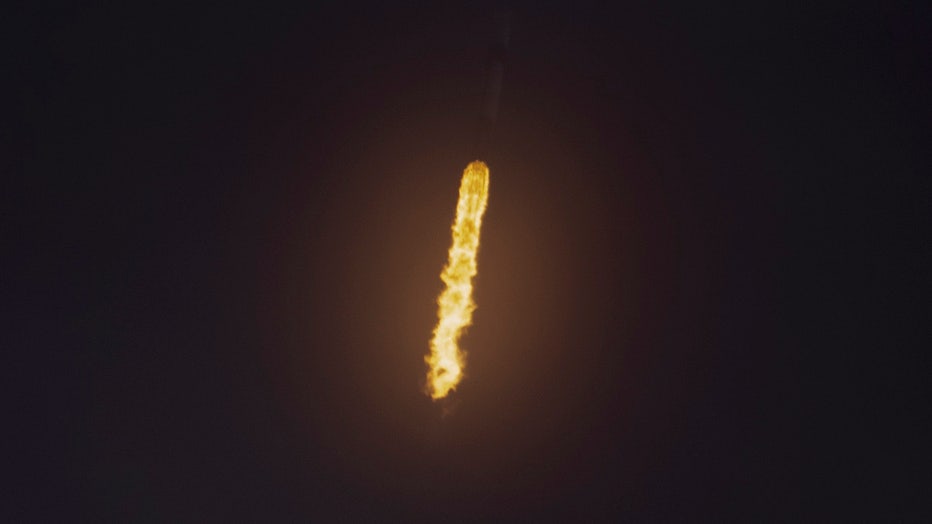 The Falcon 9's Merlin engines as seen while passing through a cloud. 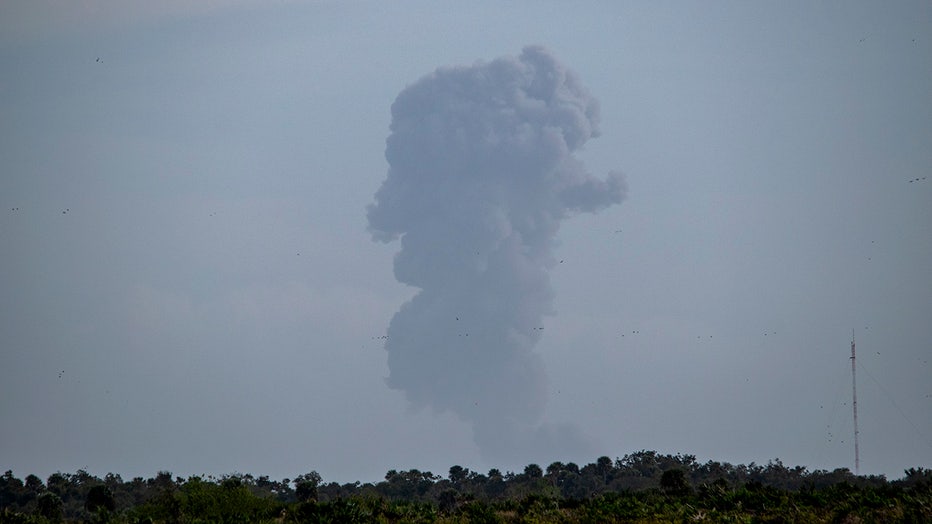 Smoke rises from the offshore location of the booster's impact.