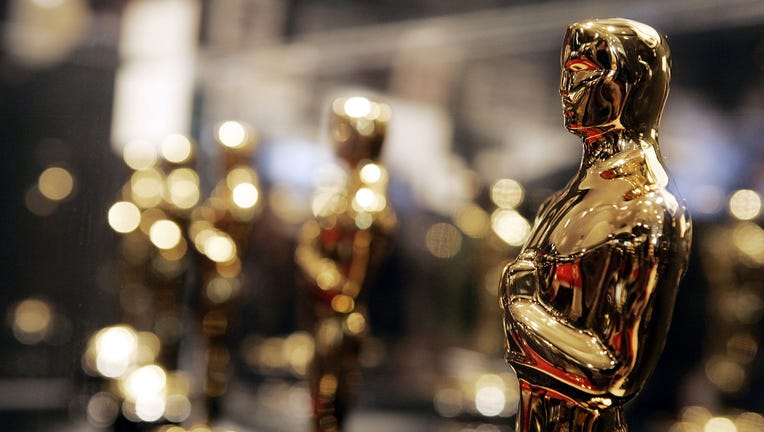 A file image shows Oscars on display at Hollywood and Highland on Feb. 10, 2006 in Los Angeles, California. (Photo by Kevin Winter/Getty Images)

The truncated time table has put the normally bloated Oscars season on a diet (Sunday’s show will also, for the second straight year, be hostless) and sent film academy members scrambling to finish their movie-watching — no small task in a year featuring a few three-hour epics like “The Irishman” and “Once Upon a Time ... in Hollywood.”

Fittingly for a fast race, a movie about a mad dash has risen to the top of the heap. After winning nearly every major precursor award, Sam Mendes’ “1917,” about a pair of British soldiers sent with an urgent message to deliver through recently-held enemy territory, is the favorite for best picture. Thanks to its technical dazzle, the seemingly one-continuous-shot “1917” is also likely to come away with the most awards Sunday, even without any acting nominations.

Although Joaquin Phoenix, Renée Zellweger, Brad Pitt and Laura Dern all appear to be all-but-certain locks in the acting categories, there’s still the potential for a history-making upset. Momentum has swung behind Bong Joon Ho’s South Korean thriller “Parasite,” and some believe it has a chance to become the first non-English language film to win best picture.

Such a win would be a watershed moment for the Academy Awards, which has long been content to relegate international films to their own category. But in an effort to diversify its largely white and male membership, the Academy of Motion Pictures Arts and Sciences has inducted more overseas members in recent years. And just about no one has a bad word to say about t he widely praised class satire “Parasite,” the Palme d’Or winner at last year’s Cannes Film Festival and the first foreign language film to win top honors from the Screen Actors Guild Awards.

The awards will be hostless once again this year.