Breaking down the Senate's 3.5 trillion budget

House and Senate Democrats hope to pass a $3.5 trillion budget this fall.

WASHINGTON - The 2021 fiscal year is coming to an end on Friday and unless Congress agrees on a budget, there will be a federal government shutdown come Oct. 1.

It would be the 21st shutdown since Congress introduced the modern budget process in 1976 — the last one ending in January 2019.

But what does a shutdown mean for the everyday person? It certainly doesn’t mean the government will cease to exist or anarchy will rule the land.

In fact, the word "shutdown" might be overstating the actual impact. Although the phrase "funding gap" is less popular, it paints a more accurate picture of the issue.

No matter what it’s called, it can leave many Americans without income and inconvenience countless others until a new budget is in place.

Here’s a look at what it means when a government shuts down and how it affects you:

What is a government shutdown?

A government shutdown is when Congress fails to fund the numerous federal government agencies and programs that rely on annual funding.

Every fiscal year, lawmakers must approve budget legislation — consisting of 12 appropriations bills, one for each appropriations subcommittee. The legislation is then sent to the sitting president, who signs it and funds the government.

A full shutdown occurs when none of the bills have been signed. A partial shutdown takes place when only a few of them have been enacted.

According to the Committee for a Responsible Federal Budget, essential services and mandatory spending programs will continue throughout the shutdown. Border protection, in-hospital medical care, air traffic control, law enforcement, and power grid maintenance have been among the services classified as essential in previous shutdowns.

Mandatory spending may be authorized for periods lasting several years or permanently.

However, federal agencies must discontinue all non-essential discretionary functions until funding is in place. And if there’s a discretionary component to a mandatory program, it may be diminished during a shutdown. 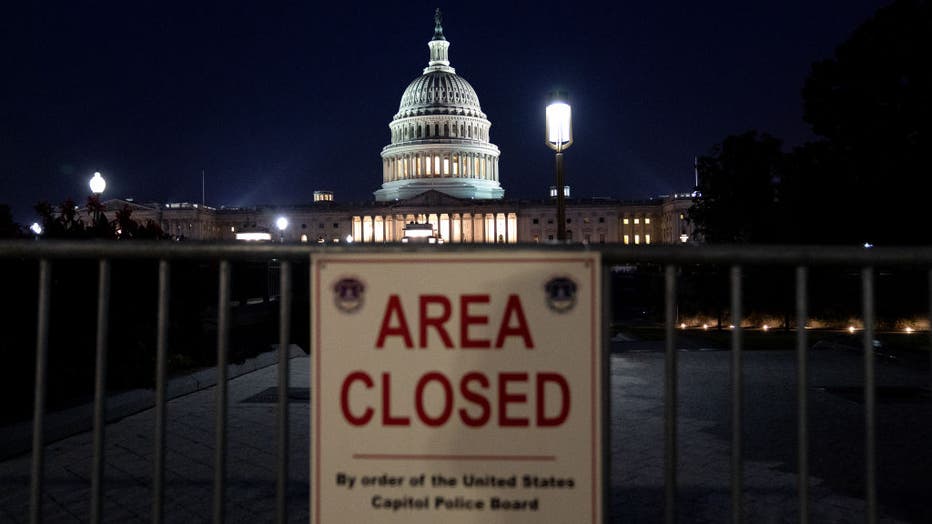 A police barricade in front of the U.S. Capitol in Washington, D.C., U.S., on Tuesday, Sept. 14, 2021. (Photographer: Stefani Reynolds/Bloomberg via Getty Images)

Which services are affected by a shutdown?

The following programs would be affected by a government shutdown:

The Office of Management and Budget coordinates contingency plans for each agency that identifies which government activities may not continue until appropriations are restored.

Oftentimes, those plans include requiring furloughs. During the 2013 and 2018 shutdowns, roughly 850,000 out of 2.1 million non-postal federal employees were furloughed.

Furloughed federal employees are not allowed to work and do not receive paychecks during shutdowns. But legislation passed in 2019 guaranteed back pay for them.

Federal contractors, though, have historically not received back pay.

Why do government shutdowns happen?

Politicians sometimes weaponize the budget as bargaining chips amid negotiations.

In 1995 and 1996, President Bill Clinton found himself at odds with the Republican-controlled Congress. Neither side could agree on spending levels and the government shut down twice for a total of 26 days.

In 2013, the GOP-led House clashed with President Barack Obama about funding for the Affordable Care Act — resulting in a 16-day shutdown.

The most recent and longest shutdown happened in the winter of 2018-2019 when the Democrat-controlled House led a dispute against the Trump administration — who wanted the congressional budget to fund his border wall. It lasted 35 days.

Presently, Democrats control the White House as well as both chambers of Congress — which usually reduces the likelihood of a shutdown. However, the Democrats have found themselves in a funding crisis regardless of their majorities.

A major point of contention is the debt limit. The U.S. has a debt load of roughly $28 trillion, but that issue doesn’t have to be resolved until around mid-October.

Democrats, however, have tried to tie it to the government funding legislation.

Historically, both parties have voted in favor of raising the debt limit. Democratic minorities joined the GOP-led Senate to see the limit raised several times during Donald Trump’s presidency.

Even so, Sen. Minority Leader Mitch McConnell, R-Ky., has ordered his conference not to support the measure. McConnell has blamed Democratic priorities like the $3.5 trillion tax and spending bills for the need to increase the debt limit, though that is not accurate.

According to the Associated Press, the debt limit increase is actually needed to pay for past spending decisions, not future. Many GOP-approved programs from the Trump presidency are tied to the need to raise the limit.

President Biden outlined his immediate and future spending plans for his "Build Back Better" agenda following budget approval from the Senate.

The tax and spending bill would cost $3.5 trillion over the course of a decade. A much smaller, $1 trillion infrastructure bill is also at the center of this crisis.

House progressives have refused to back the smaller infrastructure bill until there’s an agreement on the larger $3.5 trillion bill. The House has already passed the larger bill; it’s held up in the Senate.

Democrats can again turn to budget reconciliation — a process that allows them to circumvent a filibuster through a simple majority — but they have not yet gotten all Senate Democrats on board.

Sens. Joe Manchin, D-W.V., and Kyrsten Sinema, D-Ariz., have stated they can't support a package that totals $3.5 trillion, even if Democrats succeed in covering the cost with tax increases and other revenue.

How is a shutdown different from a default?

While a shutdown is a temporary suspension of certain government programs, a default occurs once a government exceeds the statutory debt limit and is unable to pay some of its creditors.

The U.S. government operates at a budget deficit, meaning it spends more money than it brings in through taxes so it borrows funds to make up the difference.

A default would mean the Treasury lacks enough cash to make payments to those lenders. And unless the debt limit is raised again in the coming weeks, the U.S. is in jeopardy of experiencing a default.

The constitution requires Congress to limit its borrowing, which was a routine process until American politics became more polarized in recent years.

According to the Associated Press, Democrats have committed to again voting on a bill funding the government before Thursday’s deadline, likely stripping out the more-heated debate over the debt limit for another day, closer to the separate October deadline.