Some of the veterans attempted to put out the fire, but the flames grew to quickly.

LOS ANGELES - A group of veterans has once again fallen on hard times and have been displaced after a fire broke out overnight in a village of tiny homes in West Los Angeles, destroying 11 and damaging at least four others.

The fire was reported just before 12:20 a.m. Friday in the community located near the intersection of Wilshire and San Vicente boulevards. As the fire spread, some residents rushed to get out of the fire's path while others attempted to knock down the flames using fire extinguishers.

"I got a call just after midnight that one of the tiny homes was on fire," said Rob Reynolds, a veteran and volunteer for AMVETS. The nonprofit organization works to get veterans off the streets along San Vicente Boulevard in West LA, also known as "Veterans Row."

"As I was coming up, I saw it starting to spread to the other tiny homes, and we got in to make sure everyone was accounted for."

The tiny homes are designed as a stepping stone to permanent housing for our nation’s heroes. The program offers medical and rehabilitation services.

Firefighters faced challenges knocking down the blaze because there are allegedly a limited number of fire hydrants on the property.

"It’s really unfortunate. I can’t believe this. We just want to make sure that all of them are taken care of," said Reynolds. "This property is intended to be a home for veterans. They shouldn’t even be in. tiny homes. They should be in buildings with sprinkler systems." 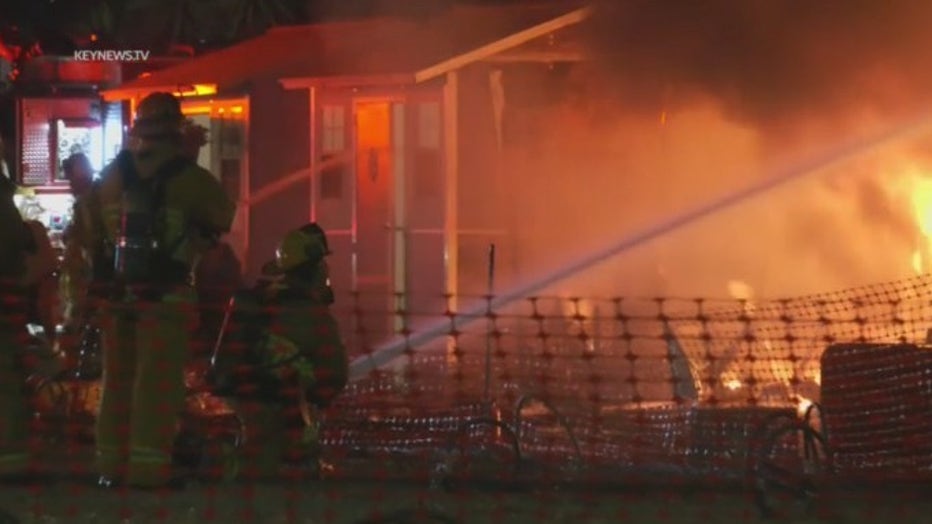 All of the residents have been accounted for and some have moved to VA domiciliary care, which will provide the veterans a place to sleep.

Officials with the Los Angeles Fire Department said they believe the fire was an accident and was possibly caused by a lithium battery and an electric bike that were being charged.

The tiny homes village has 140 units and 25 of them were built after actor, iconic bodybuilder, and former California governor Arnold Schwarzenegger donated $250,000 to the nonprofit Village for Vets just before Christmas 2021.

RELATED: Arnold Schwarzenegger donates $250K for tiny homes for homeless veterans in LA ahead of Christmas

The tiny homes on West LA’s Veterans Affairs Medical Center campus are a symbol of big dreams for the men and women who served our nation.

"A lot of them just moved off the sidewalk and were starting to get stable so this terrible that they have to go through this," Reynolds added.

Fire officials said they are working with the Red Cross to find housing for those who have been displaced.