Presidential candidate Joe Biden addressed the country Friday night in a primetime speech as his leads in key battleground states continued to grow.

"While we're waiting for the final results, I want people to know we're not waiting to get work done," he said.

He called for Americans to unite, saying that the "vast majority" of people want to "get the vitriol out of politics." He added that his responsibility as president would be to "represent the whole nation."

"We may be opponents, but we're not enemies. We're Americans," he said.

"I've never been more optimistic about the future of this nation. There is no reason we can't own the 21st century. We just need to remember who we are," Biden continued.

Biden has pulled ahead in both Pennsylvania and Georgia, and a projection in his favor in either state would put him over the electoral vote threshold required to win the presidency.

A stage set up since election night for a victory party outside the city’s convention center remained intact and has been secured for days by security personnel using high fencing and car barriers.

Biden continues to inch closer to the presidency as votes continue to be counted in several key battleground states: Arizona, Georgia, Pennsylvania, Nevada and North Carolina. 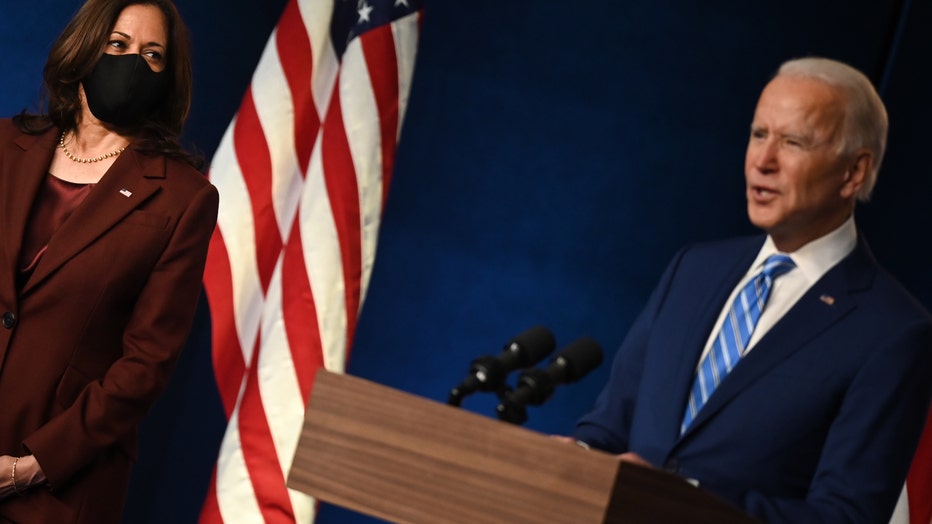 Biden has urged the public to be patient as vote counting continues. He spent Friday at home in Wilmington, Delaware.

While the election winner was still yet to be called, Biden’s transition team wasn’t waiting for a verdict in the presidential race before getting to work.

As ballots continued to be counted, longtime Biden aide Ted Kaufman was leading efforts to ensure the former vice president can begin building out a government in anticipation of a victory.

Kaufman is a former senator from Delaware who was appointed to fill the seat vacated when Biden was elected vice president. He also worked on Barack Obama’s transition team in 2008, and helped write legislation formalizing the presidential transition process.

Biden’s campaign has refused to comment on the transition process. His closest advisers say the top priority will be announcing a White House chief of staff, then assembling the pieces needed to tackle the coronavirus.

A president gets 4,000 appointees, and more than 1,200 of them must be confirmed by the Senate. That could be a challenge for Biden since the Senate may well remain controlled by Republicans.

The transition process formally starts once the General Service Administration determines the winner based on all available facts. That’s vague enough guidance that Trump could pressure the agency’s director to stall.

Whenever the process starts, if he wins, Biden will have to cope with the coronavirus, which has killed more than 230,000 Americans. Biden has promised to use his transition period to meet with the governors of every state and ask them to impose a nationwide mask-wearing mandate. He says he plans to go around any holdouts to secure such rules from county and local officials.

The Associated Press contributed this report.