SANTA CLARA, Calif. - Los Angeles Rams linebacker Bobby Wagner had arguably the biggest tackle of Monday night, when he took down a protestor the team's game against the San Francisco 49ers game at Levi's Stadium.

The takedown happened late in the second quarter when a man with a device shooting pink smoke ran on the field.

As the protester approached the Rams' sideline, Wagner decided to take matters into his own hands and tackled the man to the ground.

"I just saw someone running on the field," Wagner said. "It looked like he wasn’t supposed to be on the field so I saw security was having a problem so I helped them out."

The protester was taken off the field by security and the game quickly resumed. 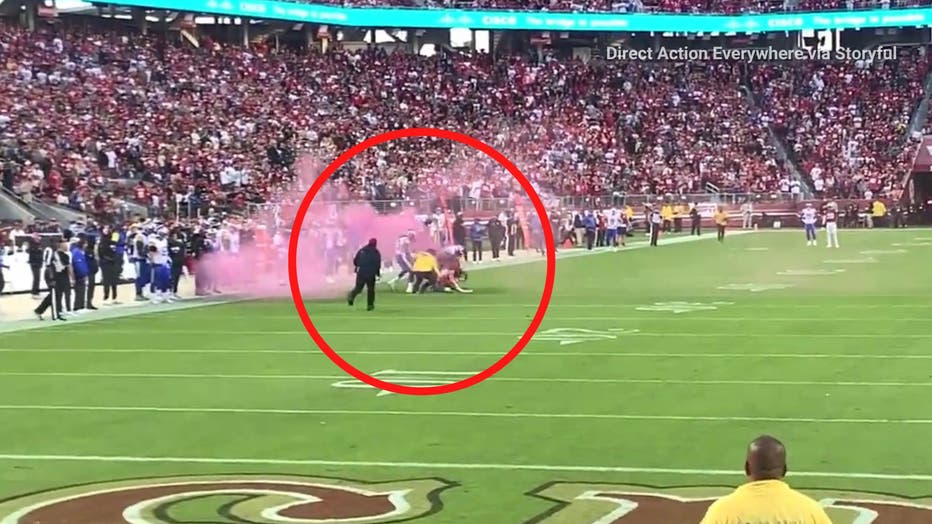 Earlier in the game, another person tried to get onto the field with a similar device but was stopped by security.

"I saw Bobby Wagner taking somebody out," 49ers coach Kyle Shanahan said. "I thought that was kind of cool to see."

The animal rights group, Direct Action Everywhere, took credit for the stunts. In a tweet, the group said that "Alex," the one who took the hit from Wagner, had "a burn on his arm. Otherwise, they're a bit beaten up but in good spirits."

On Tuesday morning, the group added that the two activists had been cited and released.