Known worldwide as the ‘Lobster Lady,’ Virginia 'Ginny' Oliver is the oldest active lobster hauler in Maine and likely the world.

Long before the day's wailing of seagulls, the early morning buzz of an alarm clock sounds in one quaint bedroom along Penobscot Bay nestled along the Gulf of Maine.

Most days, that’s at a quarter-of-three for 102-year-old Virginia Oliver as she prepares to haul lobsters for the day with her 79-year-old son.

After all, she needs a few extra minutes to find those recognizable lobster earrings that she's owned for nearly half her life, plus the right shade of red lipstick to complement them as if she was driving her pickup to market on any other day.

"Oh, I put that on first thing in the morning," she laughs.

Yet on this early morning, the Rockland, Maine, native is traveling 20 minutes down the road to the rugged coastline to haul in the sweet treat that has kept her life in motion since the days of President Warren G. Harding. 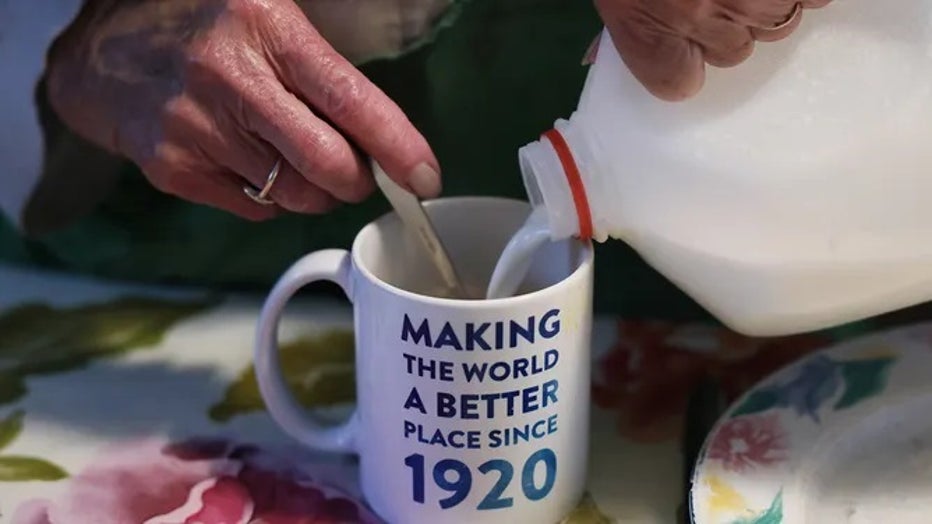 Worldwide she's recognized as the "Lobster Lady" and leader of the sea as likely the oldest licensed lobsterwoman in the world. Her notoriety has come in the form of multiple documentaries, magazine covers and even as the subject of two children’s books.

Just one of Ginny's four children, her only daughter, is not in the lobster business. She traps with her third-born, 79-year-old Max Oliver. When the weather is good, they go out three days a week from June to October. She's very adamant that five days is just too much.

"That's a job," Ginny said in rich and deep Downeast Maine accent. "And I don't want it."

Combined, the mother-son licensed team has well over 600 traps in the water. The two still use the boat of Ginny's late husband, which he named "Virginia" after the love of his life for 69 years. 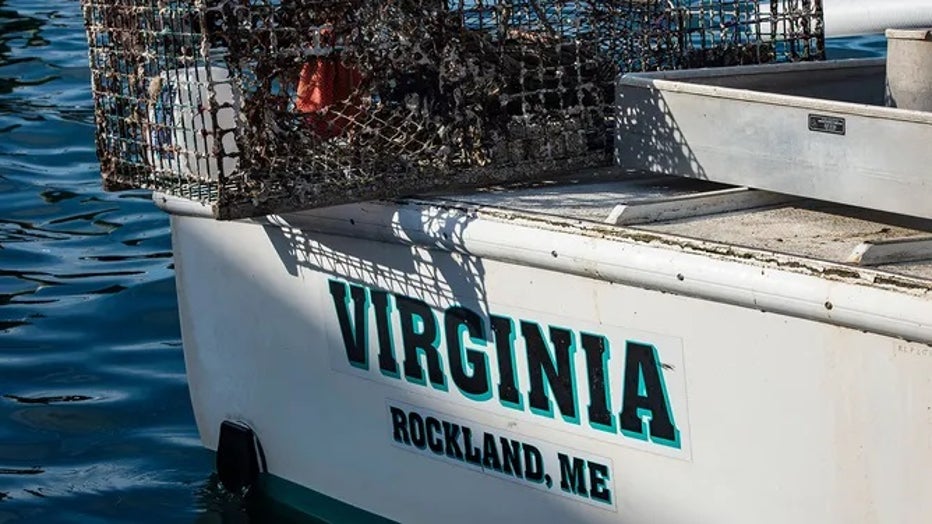 Each morning after a quick stop at the co-op for bait and fuel, the pair floats across Spruce Head by daybreak in a 30-minute jaunt to their first trap. Limitations stop fishermen, like Ginny and Max, from hauling their traps a half hour before sunrise. If they manage to haul 125 traps in a day, that’s considered a good trip.

"I can pilot the boat, but I let Max do that," Ginny said. "I tend to the lobsters."

As Max pilots the boat, his mother keeps busy filling bait bags. It’s a miserable task, but someone has to do it.

Lobsterwoman Virginia Oliver tosses back an undersized lobster as she and her son, Max, haul together in South Thomaston, Maine, on Aug. 10, 2021.  (Jessica Rinaldi/The Boston Globe)

Rockland has always been home to Ginny.

As the youngest of three siblings, Ginny has lived on Clarendon Street since she was born on June 6, 1920. Her late husband, Maxwell Oliver Sr., even lived on the same street. After they married, the two moved into a home together, and it's the same place she rests her head today.

Growing up during The Great Depression, Ginny started lobstering with her older brother when she was 8. She's been lobstering on and off for the past 94 years. 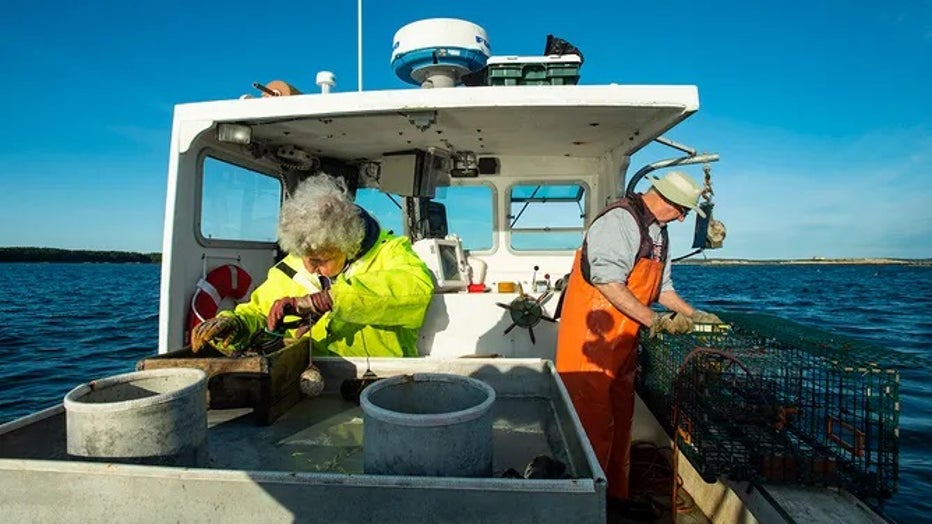 Virginia Oliver bands a lobsters' claws as her son Max pulls them from the traps in Penobscot Bay in Maine on July 31, 2021.(Joseph Prezioso / AFP / Getty Images)

She spent her summers on The Neck of Andrews Island with her family where her father ran a lobster pound. By the time she was in the third grade, she was even piloting her own lobster boat. It was the same vessel her father would send her out in to tell his fishermen to come to work. She would also help her father around the family store which they lived above, selling supplies and bait to the lobstermen as well as gasoline for their boats.

There’s no denying it. Lobstering just comes naturally to Ginny, and she enjoys it. Her husband loved it just as much and started hauling in 1945 after World War II.

Ginny has taken on various types of work over the years, such as at the local printing shop where she worked for almost 19 years. She has always been drawn back to the water.

She recalls a day her husband came home from fishing in Muscle Ridge and saw the laundry on the line. When he questioned why she wasn’t at work, she told him she had quit and wanted to start lobstering with him. 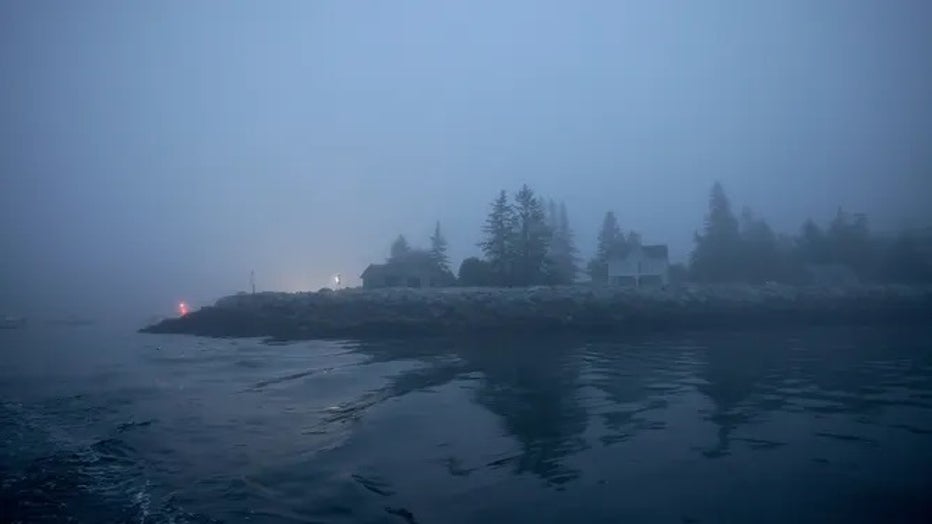 The life of a lobster hauler is not for the faint of heart. The hours are grueling. The pay is sometimes minimal. However, those in the industry will tell anyone who asks that they have a love for the open water.

Ginny enjoys her time offshore, but she hates to pilot the boast by herself when it’s foggy.

"I don't like the fog, but you have to go in it," she said. "We've got radars, and we've got depth finders, but I don't steer the boat too much when it's foggy. I make Max do it." 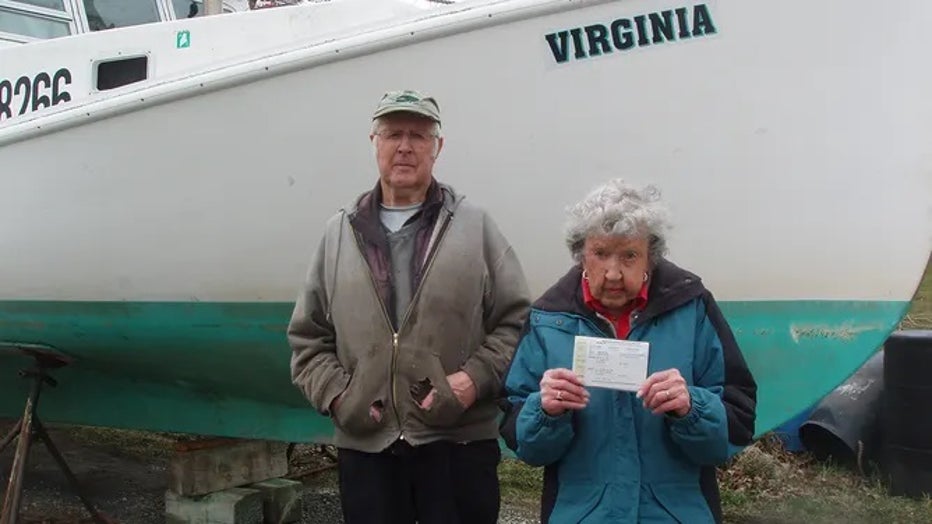 Virginia Oliver fishes with her 79-year-old son, Max Oliver. The two still use Ginny's late husband’s boat, which he rightfully named "Virginia" after the love of his life for 69 years.(Virginia Oliver)

Life on a boat for over nine decades gets rough sometimes. Some years, the fog lingers and makes anyone onboard wet to the gills. Ginny said she never gets seasick.

According to Ginny, she started lobstering when no women ever went out. Today, quite a few females have joined the profession.

"When I first started, there weren't any women going but me," she recalled. "Now, a lot of wives and girlfriends go with the men now lobstering."

Modern-day traps are also different. They are wired compared to the wooden structures Ginny used growing up. It was also a lot more work to sink the traps than today’s current technology. Trappers also had to be more self-reliant – something the Lobster Lady has learned over the years.

GRANDMA, GRANDSON FIND FORGIVENESS IN MISSION TO VISIT EVERY US NATIONAL PARK TOGETHER 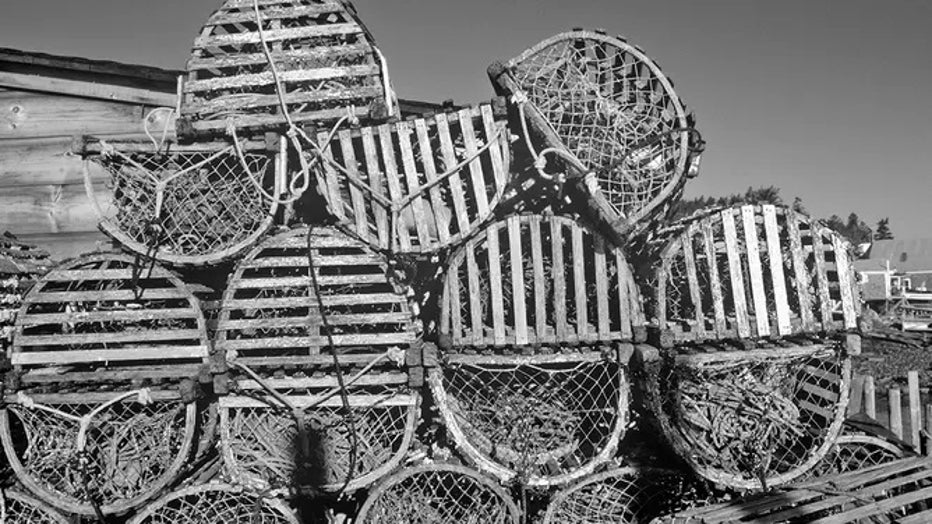 Ginny can still remember the day a crab bit her. The injury required seven stitches.

"The doctor said, ‘What are you doing out there lobstering anyway?' she recalled. "And I said, ’Because I want to.'"

Still to this day, Ginny doesn't think her doctor liked her salty reply, but she didn't care.

"I told him anyway," she added. "I'm pretty independent."

After breaking her right wrist years ago, Ginny now does all the banding with one hand because she does not have enough strength in the other.

As her son hauls the traps out of the water, she will measure and band them. If they are too short or have eggs, she will throw them back into the water. 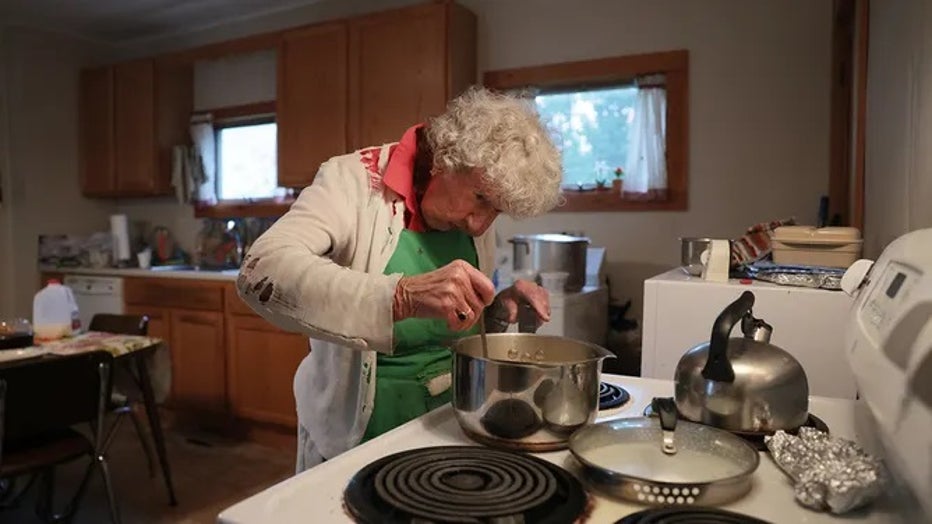 Virginia Oliver stirs a pot of mashed potatoes as she makes dinner for herself and her son, Max, in Rockland, Maine, on Aug. 10, 2021.(Jessica Rinaldi/The Boston Globe / Getty Images)

Ginny's four children all still reside in the immediate Rockland area – the youngest is now 76 and the oldest is 82. They all still gather for supper every Saturday night around the same kitchen table they grew up eating on. Lobster is hardly ever on the menu, but you are sure to find some of Ginny's famous baked beans, pickles or homemade pastries. 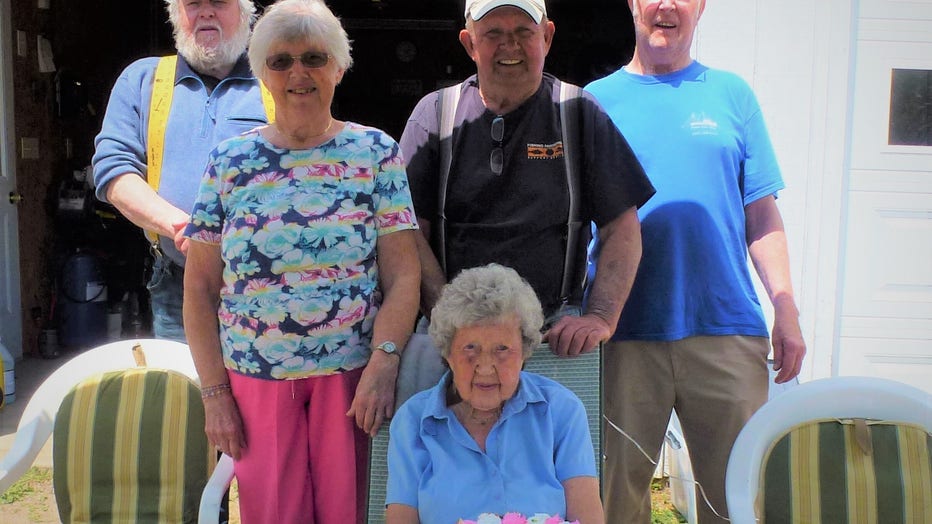 Virginia Oliver celebrates her birthday with her four kids, from left to right, William, 80; Margaret, 82; Charles, 76; and Max, 79.(Virginia Oliver)

If you are wondering what her secret to life is, it’s simple: stay busy.

As each day goes by, Ginny gets older, but her wisdom and humility grow stronger. The world is constantly changing around her, but one thing is for certain. Her alarm clock will still buzz each morning of a lobster haul at a quarter-of-three until the day she decides to retire, which apparently isn’t coming anytime soon.

People often question when she plans to hang up her traps. "When I die," Ginny replies with a smile and a laugh.