Hundreds gathered to remember Halyna Hutchins who was killed in an accidental shooting on the movie set of "Rust," starring Alec Baldwin.

BURBANK, Calif. - A candlelight vigil was held in Burbank Sunday evening for cinematographer Halyna Hutchins, who was killed when actor Alec Baldwin fired a prop gun on a New Mexico movie set in a shooting that has sparked renewed calls for stepped-up safety on film sets. 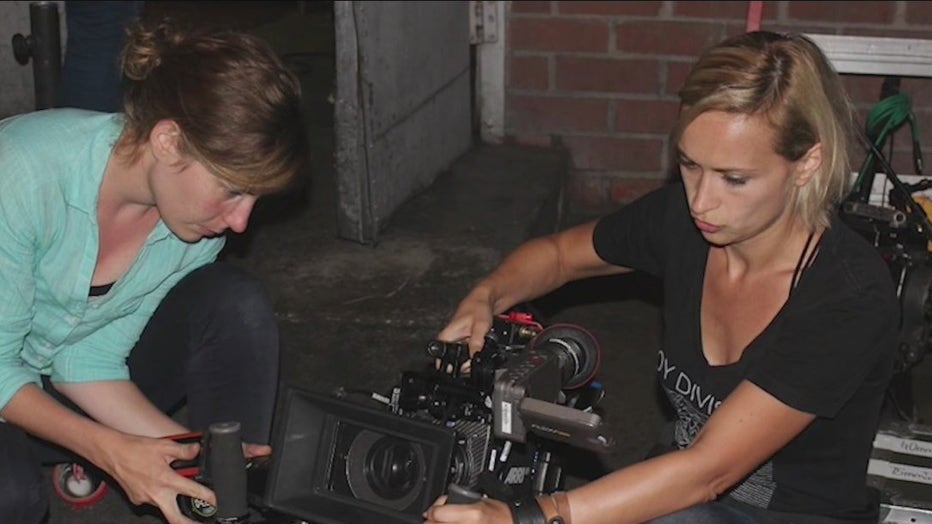 "Let's all take a moment and gather together to honor Halyna and her accomplishments and grieve together as one. Please bring your own candle, and join together for a candlelight vigil for Halyna," the guild announced on Facebook.

A candlelight vigil is planned Sunday in Burbank for cinematographer Halyna Hutchins, who was killed when actor Alec Baldwin fired a prop gun on a New Mexico movie set.

Another vigil was planned for 6 p.m. Saturday at the Albuquerque Civic Plaza in Albuquerque, N.M.

Baldwin has expressed "shock and sadness" over the death. Hutchins, 42, died at University of New Mexico Hospital in Albuquerque following the on- set mishap Thursday. The film's director, Joel Souza, 48, was also injured, but he was treated and released from the hospital.

"There are no words to convey my shock and sadness regarding the tragic accident that took the life of Halyna Hutchins, a wife, mother and deeply admired colleague of ours," Baldwin wrote on his Twitter page Friday morning. "I'm fully cooperating with the police investigation to address how this tragedy occurred and I am in touch with her husband, offering my support to him and his family.

FOX 11 spoke with a prop master to discuss how a tragic incident like Alec Baldwin's movie set could happen during production.

"My heart is broken for her husband, their son and all who knew and loved Haylna."

Baldwin, 63, was filming a scene for the film "Rust" on a movie set south of Santa Fe, New Mexico, on Thursday when he discharged the prop weapon. Sheriff's officials were continuing to investigate what happened. Baldwin is a co-producer of the film.

The circumstances of the shooting remained under investigation. Late Friday, The Associated Press obtained an affidavit in support of a search warrant in Santa Fe, New Mexico, in which investigators stated that an assistant director on the film handed Baldwin the weapon and told the actor it was safe to use -- unaware that it was loaded with live rounds. The shooting occurred moments later, with sources telling Los Angeles Times it occurred when Baldwin was rehearsing a scene outside a church on the set.

Souza released his own statement to NBC News on Saturday, saying he was "gutted by the loss of my friend and colleague" Hutchins.

"She was kind, vibrant, incredibly talented, fought for every inch and always pushed me to be better," he said.

Local 44 of the International Alliance of Theatrical Stage Employees, the union that represents prop masters, sent its members an email -- subsequently obtained by The Times and other media outlets -- saying "a live single round was accidentally fired on set" by Baldwin.

Alec Baldwin was handed a loaded weapon by an assistant director who indicated it was safe to use in the moments before the actor fatally shot a cinematographer, court documents reveal.

The tragedy was reminiscent of the 1993 death of actor Brandon Lee, son of Bruce Lee. Brandon Lee was fatally shot during filming of "The Crow," with what was supposed to be a blank round but turned out to be a deadly bullet. Lee's sister, Shannon, posted a message on her brother's official Twitter account Thursday saying, "Our hearts go out to the family of Halyna Hutchins and to Joel Souza and all involved in the incident on `Rust.' No one should ever be killed by a gun on a film set. Period."

The death of Hutchins has again renewed concerns about on-set safety. The Times reported Friday that a half-dozen camera crew workers had walked off the "Rust" set hours before the fatal shooting, protesting working conditions, including long hours, safety conditions and issues getting their paychecks. The paper reported that Hutchins had been advocating for safer conditions for her team.

One person who was on the set told The Times there had been two misfires involving the prop gun on Saturday, and one the previous week.

The "Rust" production company issued a statement Thursday saying, "The entire cast and crew has been absolutely devastated by today's tragedy, and we send our deepest condolences to Halyna's family and loved ones. We have halted production on the film for an undetermined period of time and are fully cooperating with the Santa Fe Police Department's investigation. We will be providing counseling services to everyone connected to the film as we work to process this awful event."

John Lindley and Rebecca Rhine, the national president and executive director, respectively, of the International Cinematographers Guild, issued a joint statement saying, "The details are unclear at this moment, but we are working to learn more and we support a full investigation into this tragic event. This is a terrible loss, and we mourn the passing of a member of our guild's family."

SAG-AFTRA President Fran Drescher and National Executive Director Duncan Crabtree-Ireland issued a statement saying, "This is still an active investigation and we do not yet have all the facts. We will continue to work with production, the other unions and the authorities to investigate this incident and to understand how to prevent such a thing from happening again."

In response to Hutchins' death, the showrunner of the ABC police drama "The Rookie" announced that "live" weapons would no longer be used on the set, according to The Hollywood Reporter.

Showrunner Alexi Hawley announced the change in a memo to the show's staff, saying "all gunfire on set will be with Air Soft guns with CG muzzle flashes added in post. There will be no more `live' weapons on the show. The safety of our cast and crew is too important. Any risk is too much risk."