The 60-meter toddler race was held by USA Track & Field in light of the Tokyo Olympics.

TOKYO - U.S. track star Allyson Felix made history on Friday in the 400-meter final, becoming the most decorated female Olympian in track and field and tying for the most U.S. track medals awarded.

She finished two spots behind gold medalist Shaunae Miller-Uibo. Miller-Uibo defended her 400-meter title in a time of 48.36 seconds.

"Congratulations @allysonfelix. 35 never looked so good. What an amazing career and inspiration. Now on to the relay," Lewis wrote on Twitter.

Felix, who made her debut as an 18-year-old representing the U.S. at the 2004 Summer Olympics in Athens, has competed in five Games. She into the Tokyo Games having already won six gold and three silver medals.

The road to Tokyo for Felix has been filled with more twists and turns than she might’ve imagined two decades ago when she burst onto the scene as America’s fresh-faced sprint star.

They included the difficult birth of her now-2-year-old daughter, Camryn, who spent time in the neonatal intensive-care unit after she was born; and a very pronounced move into advocacy for female athletes in her sport, many of whom had been left on the sideline by sponsors when they became pregnant. 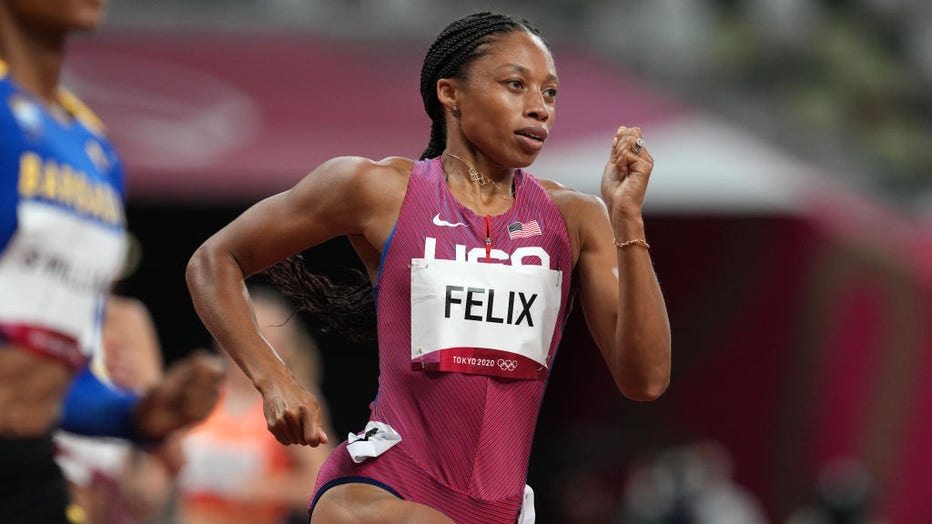 USA's Allyson Felix in the Women's 400m Semifinal at the Olympic Stadium on the twelfth day of the Tokyo 2020 Olympic Games in Japan on Aug. 4, 2021. (Photo by Martin Rickett/PA Images via Getty Images)

The COVID-19 pandemic put an even tougher spin on things, costing Felix a year at a time in her career when every day counts. To make the most of the time, Felix found herself waiting outside her house for coach Bobby Kersee to measure out distances on the street so she could train while tracks and gyms were closed.

"My first year back was a struggle, and I just kept getting hit with thing after thing," Felix said. "There was the sponsorship battle, and I was just ‘Man, I hope something comes together for me.’ I just kept fighting. I wanted to give it one more shot."