Onlookers at the Kabul airport videoed the moment an American soldier reached over a barbed wire-topped wall to pull up an infant being held above a crowd of refugees. (Credit: Omar Haidari via Storyful)

KABUL, Afghanistan - An American soldier reached over a wall topped with barbed wire Thursday to lift an infant out of the crowd of Afghans desperate to escape the Taliban’s new regime.

Onlookers caught the moment on camera. The video shows someone near the front of the wall hoisting the child up, just within reach of soldiers on top of the wall.

A soldier used one arm to stabilize himself above the wire and the other to grab the baby. He then passed the child to another soldier.

It is unclear what happened to the child after the troops took procession. But the moment revives memories of Operation Babylift at the end of the Vietnam War.

Thousands of Vietnamese babies, mostly fathered by American military personnel, were evacuated during the American troop drawdown, according to the Gerald R. Ford Presidential Library & Museum. 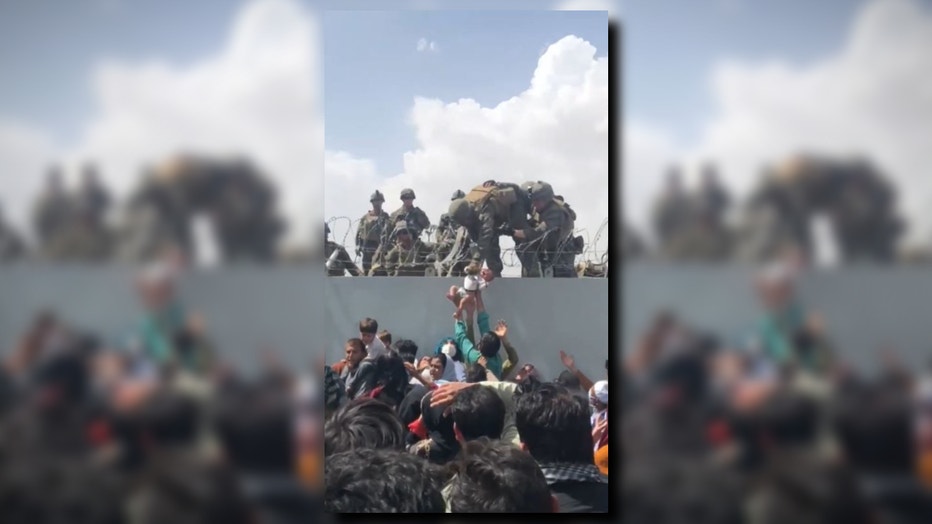 Onlookers at the Kabul airport videoed the moment an American soldier reached over a barbed wire-topped wall to pull up an infant being held above a crowd of refugees. (Credit: Omar Haidari via Storyful)

Since mobs of refugees began crowding the Kabul airport earlier this week, the Afghan evacuation effort has been compared to America’s departure from Vietnam.

Many thousands of Afghans have managed to board flights abroad. But those who have yet to escape have turned to desperate measures.

Video showed people surrounding and clinging to a U.S. Air Force C-17 transport plane as it taxied for takeoff. One video showed people holding on to the landing gear and other parts of the plane. Another video showed a plane in the air with something, or someone, appearing to fall from the aircraft.

President Joe Biden has vowed the U.S. will bring home all American citizens remaining in Afghanistan, and to evacuate the Afghans who aided the American war effort.