WASHINGTON - Officials at the U.S. Embassy in Moscow visited jailed WNBA star Brittney Griner on Thursday, just weeks after a Russian court rejected her appeal of her nine-year sentence for drug possession.

State Department spokesman Ned Price said in a tweet that the American representatives "saw firsthand her tenacity and perseverance despite her present circumstances."

Price said the Biden administration is continuing to press for the immediate release of Griner and Paul Whelan, who was sentenced in 2020 to 16 years in prison in Russia on espionage-related charges that he and his family say are bogus, and "fair treatment for every detained American."

White House press secretary Karine Jean-Pierre said Griner "is doing as well as can be expected under the circumstances" and that the administration was working "to resolve the current unacceptable and wrongful detentions" of Griner and Whelan."

Griner was convicted in August after police said they found vape canisters containing cannabis oil in her luggage at Moscow’s Sheremetyevo Airport. Her arrest in February came at a time of heightened tensions between Moscow and Washington, just days before Russia sent troops into Ukraine. At that time, Griner was returning to play for a Russian team during the WNBA’s offseason.

She admitted at her trial to having the canisters in her luggage but testified she packed them inadvertently in her haste to make her flight and had no criminal intent. Her lawyers have called the punishment excessive.

MORE: Kremlin: Any talks about Brittney Griner swap must be confidential 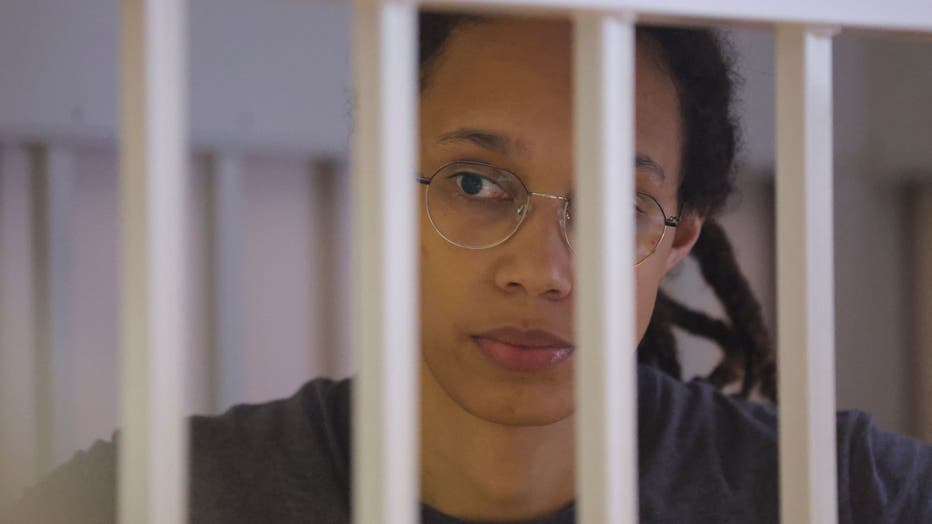 US' Women's National Basketball Association (WNBA) basketball player Brittney Griner, who was detained at Moscow's Sheremetyevo airport and later charged with illegal possession of cannabis, waits for the verdict inside a defendants' cage during a he (Photo by EVGENIA NOVOZHENINA/POOL/AFP via Getty Images)

The United States regards Griner and Whelan as wrongful detainees and has been trying to negotiate with Russia for their release. Secretary of State Antony Blinken said over the summer that the U.S. had made a "substantial proposal" to Russia to try to get both home.

People familiar with the offer have said the U.S. wanted to swap Whelan and Griner for convicted Russian arms dealer Viktor Bout.

There have been no outward signs of progress since then in the negotiations.

Jean-Pierre told reporters traveling with the president to New Mexico that "despite a lack of good faith negotiation by the Russians, the U.S. government has continued to follow up on that offer and propose alternative potential ways forward with Russia through all available channels. This continues to be a top priority."