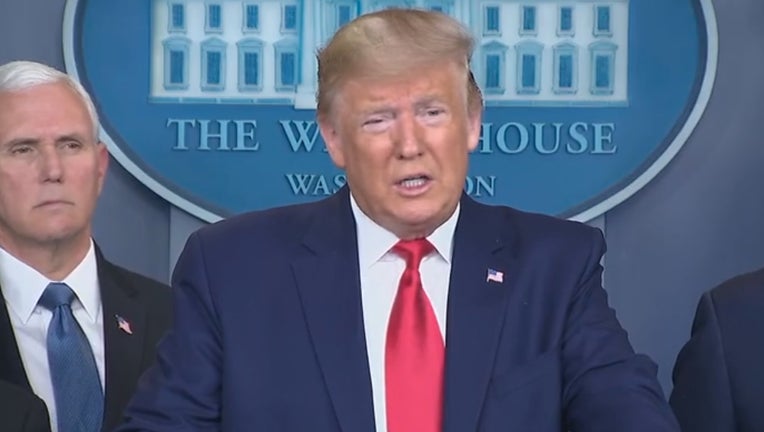 WASHINGTON - The U.S. is banning travel to Iran in response to the outbreak of the new coronavirus and elevating travel warnings to regions of Italy and South Korea.

Vice President Mike Pence announced the new restrictions and warnings as President Donald Trump said 22 people in the U.S. have been stricken by the new coronavirus and that additional cases are “likely.”

RELATED: Person in Washington state first in US to die from new coronavirus

“We want to lower the amount of travel to and from the most impacted areas,” said Alex Azar, the secretary of health and human Services. “This is a basic containment strategy.”

Trump provided an update on the virus after the first reported U.S. death Saturday, of a woman he described as being in her late 50s and having a high medical risk. Robert Redfield, director of the Centers for Disease Control and Prevention said there was “no evidence of link to travel” in the case of the woman who died.

Trump said healthy Americans should be able to recover if they contract the new virus, as he tried to reassure Americans and global markets spooked by the virus threat.

On Friday, health officials confirmed a second case of coronavirus in the U.S. in a person who didn’t travel internationally or have close contact with anyone who had the virus. The U.S. has a total of about 60 confirmed cases.

RELATED: State officials: Florida has no testing kits for coronavirus

But Trump encouraged Americans not to alter their daily routines, saying “there’s no reason to panic at all.”

He added he wasn’t altering his routine either. “You’re talking about 22 people right now in this whole very vast country. I think we’ll be in very good shape.”

Trump spoke a day after he denounced criticism of his response to the threat as a “hoax” cooked up by his political enemies. Speaking at a rally in South Carolina he accused Democrats of “politicizing” the coronavirus threat and boasted about preventive steps he’s ordered in an attempt to keep the virus that originated in China from spreading across the United States. Those steps include barring entry by most foreign nationals who had recently visited China.

“They tried the impeachment hoax. ... This is their new hoax,” Trump said of Democratic denunciations of his administration’s coronavirus response.

Trump said Saturday he was not trying to minimize the threat of the virus.

“Again, the hoax was used in respect to Democrats and what they were saying,” he said.

Some Democrats have said Trump could have acted sooner to bolster the U.S. response to the virus. Democratic and Republican lawmakers also have said his request for an additional $2.5 billion to defend against the virus isn’t enough. They’ve signaled they will provide substantially more funding.

RELATED: WHO says COVID-19 threat now at highest level: ‘Wake up. Get ready. This virus may be on its way.’

Trump said Democrats want him to fail and argued that steps he’s taken so far have kept cases to a minimum and prevented virus deaths in the U.S.

RELATED: Here's what to include in a coronavirus emergency kit