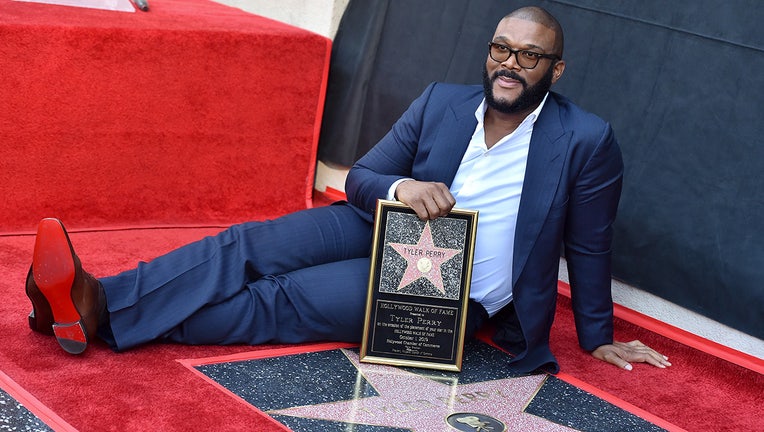 Tyler Perry is honored with star on the Hollywood Walk of Fame on October 01, 2019 in Hollywood, California. (Axelle/Bauer-Griffin/FilmMagic via Getty Images)

HOLLYWOOD (CNS) - Tyler Perry received a star on the Hollywood Walk of Fame today, honoring his creation of an entertainment empire spawned by a series of films about the God-fearing, gun-toting grandmother Madea.

Actor Idris Elba, who starred in the 2007 Perry-directed romantic drama "Daddy's Little Girls," and actresses Crystal Fox and Kerry Washington were among those joining Perry at the ceremony adjacent to the Hollywood Roosevelt Hotel on Hollywood Boulevard.

"My hope is that anyone in this town, because I see lots of people come here with their dreams in their hands and sometimes it doesn't work out or sometimes they give up, and for all those people whose dreams may be on life support, I want you to walk past this star in particular and know that I've been there," Perry said.

The star is the 2,675th since the completion of the Walk of Fame in 1961 with the first 1,558 stars. The ceremony was held in conjunction with the Oct. 23 premieres of his latest series, "The Oval" and "Sistas," both on BET. It came four days before the grand opening of the Tyler Perry Studios at the former Fort McPherson in Atlanta.

Born and raised in New Orleans, Perry's childhood was marked by poverty and a household scarred by abuse.

From a young age, Perry wrote his daily thoughts and experiences in a series of soul-searching letters to himself. The letters provided Perry with the inspiration to write his first play, "I Know I've Been Changed" in 1992.

Perry then wrote 13 plays over the next 13 years, including "Woman Thou Art Loosed!" and "I Can Do Bad All By Myself," which marked the first appearance of Madea.

Perry's first television project was the comedy "Tyler Perry's House of Payne," which debuted in limited-run syndication in 2006 then ran on cable's TBS from 2007-12.

In 2012, Perry signed an exclusive deal with Oprah Winfrey to bring scripted programming to her OWN cable network, beginning with the family comedy "Love Thy Neighbor" and the drama "The Haves and the Have Nots," which stars Fox.

In addition to the films he writes, directs, stars in and produces, Perry also starred in the 2012 crime thriller, "Alex Cross," portrayed then-Secretary of State Colin Powell in the 2018 Dick Cheney biography, "Vice," and Admiral Barnett in the 2009 film, "Star Trek."