Sen. Mitch McConnell, responding to questions, says "There is simply no room in the Republican party for anti-Semitism or white supremacy."

WASHINGTON - Senate Republican leader Mitch McConnell said Tuesday that anyone who thinks the Constitution should be suspended would have a "very hard time" becoming president in the United States, trying to distance himself from Donald Trump's new White House bid.

It's the second time McConnell has been forced to open his weekly press conference preemptively responding to questions about the former president's remarks and behavior. Last week, it was over Trump's dinner meeting with a white nationalist Holocaust denier.

"Let me just say that anyone seeking the presidency who thinks the Constitution can somehow be suspended or not followed, it seems to me, would have a very hard time being sworn in as President of the United States," McConnell said at the Capitol.

The remarks come as Trump, who announced he is running again for the presidency in 2024, is putting his party into the familiar position of responding to his ideas, statements and outbursts, forcing Republicans to publicly answer for his behavior. 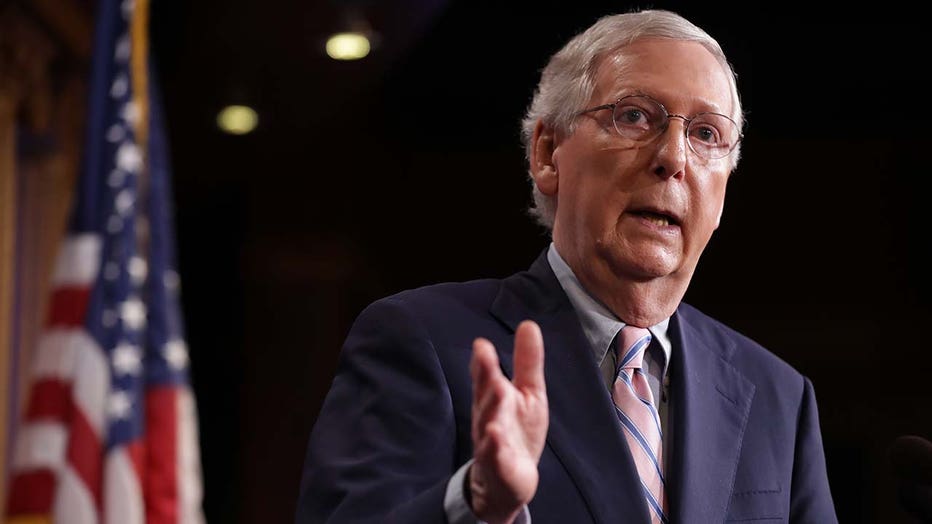 Trump over the weekend called for "the termination of all rules, regulations, and articles, even those found in the Constitution" after new revelations of what he said was Twitter's unfair treatment of him during the 2020 presidential election that he lost to Joe Biden.

Reaction from Republicans has been critical, even as many GOP officials remain unwilling to directly confront Trump as the leader of their party.

McConnell, as the Republican leader trying to steer his party in a post-Trump era — the two have not spoken since McConnell agreed to the Electoral College tally for Biden at the end of 2020 — faces an endless task of reacting to the former president's outbursts.

Still, McConnell deflected questions over whether he could support Trump if he becomes the Republican Party's 2024 presidential nominee.

Instead, the Senate GOP leader reiterated the difficulty of taking the oath, which requires the president-elect to defend the Constitution.

"It would be pretty hard to be sworn into the presidency if you're not willing to uphold the Constitution," McConnell said.

Over the weekend, Trump latched on to a report from new Twitter owner Elon Musk suggesting favoritism on the social media platform during the 2020 presidential race.

Twitter was asked to moderate content about Biden's family, particularly his son, Hunter Biden, that Republicans wanted to amplify in their attacks against the Democrat.

Trump, on his social media app, had said that, "Fraud of this type and magnitude allows for the termination of all rules, regulations, and articles, even those found in the Constitution." He later accused the media of distorting his comments and "trying to convince the American People that I said I wanted to ‘terminate’ the Constitution."

Two weeks ago, Trump came under criticism for having dinner with Nick Fuentes, a known white nationalist and Holocaust denier. Trump said he was unaware of Fuentes' beliefs.

Republicans have been unable to firmly reject Trump as their potential nominee even as many of them try to distance themselves from his recent activities.

House GOP leader Kevin McCarthy, who is in line to become the House speaker when Republicans take control in the new year, has yet to fully weigh in on Trump's latest comments.

"This week Trump said we should terminate all rules, regulations etc ‘even those in the Constitution’ to overturn the election. Are you so utterly without principle that you won’t condemn this either?"