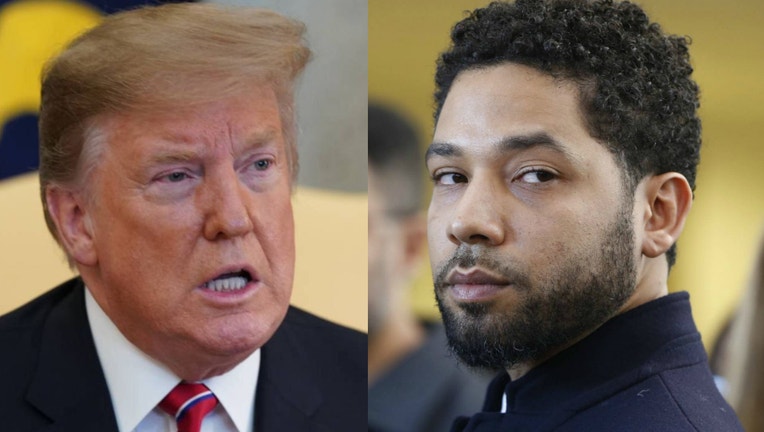 CHICAGO (AP) - President Donald Trump tweeted Thursday that the FBI and Department of Justice will review the "outrageous" case of "Empire" actor Jussie Smollett in Chicago, calling it an "embarrassment" to the country.

Prosecutors infuriated Chicago's police chief and mayor this week when they abruptly dropped 16 felony counts against the "Empire" actor that were related to making a false police report. Prosecutors offered little explanation and sealed the case -- yet still insisted the actor faked a racist, anti-gay attack on himself in January.

Prosecutors offered no additional information during a court hearing Thursday with media attorneys who argued that the public had a right to know what happened. Earlier in the day, Trump tweeted: "FBI & DOJ to review the outrageous Jussie Smollett case in Chicago. It is an embarrassment to our Nation!"

Police said investigators believe Smollett, who is black and gay, hired two brothers to stage the early-morning Jan. 29 attack in downtown Chicago, and that Smollett hoped it would gain attention and help advance his career. Police also allege that before the attack, Smollett sent a letter threatening himself to the Chicago television studio where "Empire" is shot.

The FBI, which is investigating that letter, has declined to comment.

Smollett attorney Tina Glandian said the two brothers, who claim they worked with Smollett to stage the attack, are lying. She said Smollett had hired one brother as a personal trainer but had no idea who attacked him along a Chicago street until the brothers were later identified by police.

Smollett has repeatedly insisted the attack was real, saying two masked men used racial and homophobic slurs, wrapped a rope around his neck and poured an "unknown substance" on him. Police said Smollett also told detectives the attackers yelled he was in "MAGA country," an apparent reference to Trump's "Make America Great Again" campaign slogan.

Prosecutors initially charged Smollett with one felony count, in February. A grand jury indicted him on 15 more counts earlier this month. But in a stunning reversal Tuesday, the Cook County state's attorney's office abruptly dropped all charges against him, just five weeks after the allegations were filed.

In return, prosecutors said, the actor agreed to let the city keep his $10,000 in bail.

The dismissal drew a backlash and raised the question of why Smollett was not forced to admit any wrongdoing.

During Thursday's court hearing, prosecutors promised to notify media outlets if Smollett's lawyers tried to expunge his record. But lawyers for major news outlets, including The Associated Press, told the judge the case hasn't been transparent.

"The public is entitled to know what happened and what's happening in this proceeding," media attorney Natalie Spears argued.

Also among those sure to keep pressing for answers is Chicago Mayor Rahm Emanuel. He appeared blindsided by prosecutors' decision to drop the charges and visibly angry during a Tuesday press conference, calling the decision "a whitewash of justice."