President Trump sparked speculation about his relationship with the country's top disease expert Sunday night after he retweeted a post that called for the doctor's job.

WASHINGTON - President Trump sparked speculation about his relationship with the country's top disease expert Sunday night after he retweeted a post that called for the doctor's job.

Trump used statements Dr. Anthony Fauci made in February as evidence that a recent New York Times report that said he was slow to act on the coronavirus outbreak was "fake news."

Fauci, the director of the National Institute of Allergy and Infectious Diseases, was asked about the report on CNN and admitted that earlier action could have saved more lives. The Times' report said Trump played down the seriousness of the virus throughout January.

DeAnna Lorraine, a former Republican congressional candidate, called out Fauci in her own tweet and said he told people in late February that "there was nothing to worry about and it posed no threat to the US public at large. Time to #FireFauci."

Trump seized on Lorraine’s tweet as evidence of “fake news,” from the Times.  Trump implied that if there were widespread concerns about the virus in the White House in January, surely Fauci would have known in late February.

"Sorry Fake News, it's all on tape. I banned China long before people spoke up," Trump tweeted, before thanking One News Network. Trump's tweet linked to Lorraine's tweet that called for Fauci's ouster.

Fauci was on NBC News’ “Today” on Feb. 29, the date Lorraine mentioned, and talked about the “community spread” of the coronavirus. The virus, at that time, was known to be in Italy and China. Fauci was asked if Americans should change their way of life and he said, “there is no need to change what you are doing on a day-by-day basis.” But he said that could change.

The New York Times reported this weekend that Trump played down the seriousness of the virus in January, even though experts in both his cabinet and intelligence agencies “sounded the alarm.”

Trump called the Times’ story “Fake, just like the “paper” itself.”

Trump has said that his decision to “close” the U.S. to China in early February was prescient, despite being panned in the media as "xenophobic."

As of early Monday, there were nearly over 550,000 confirmed cases in the U.S. and 22,000 deaths. Cities like New York have seen their public health systems straining under the demand to treat new patients. Although some governors and White House projections are optimistic that the curve is flattening, health officials have predicted that stay-at-home orders will be in place for the foreseeable future.

The Times has reported that Fauci has “grown bolder” in correcting Trump publicly and Fauci, in turn, “has become a hero to the president’s critics because of it.”

Fauci, for example, has publicly played down Trump’s claim that hydroxychloroquine combined with an antibiotic could be a “game-changer” in the fight against the disease. 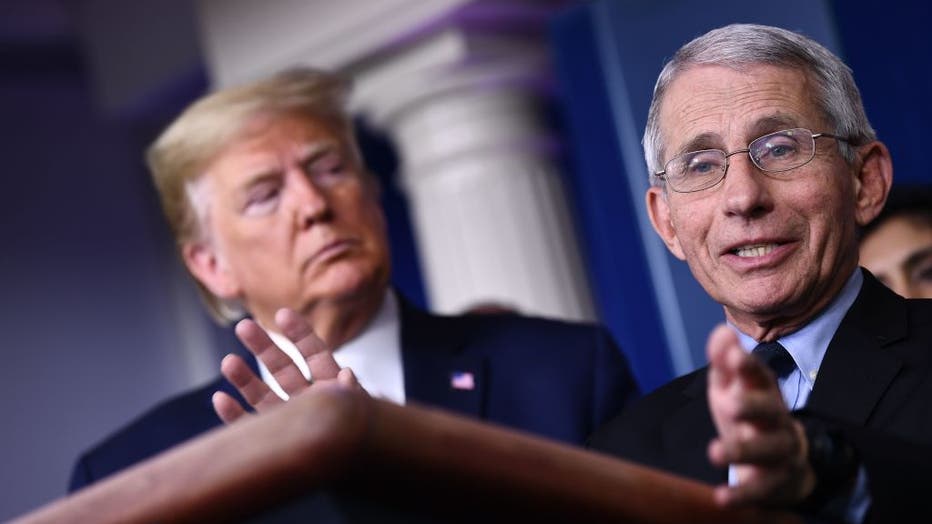 Dr. Anthony Fauci speaks as US President Donald Trump listens during the daily press briefing on the Coronavirus pandemic situation at the White House on March 17, 2020 in Washington, DC. - The coronavirus outbreak has transformed the US virtually ov

Fauci was asked on CNN Sunday about the Times report on Trump playing down the threat.

“I mean. Obviously, you could logically say that if you had a process that was ongoing and you started mitigation earlier, you could have saved lives,” Fauci said on Sunday. He said the decision process is complicated but said “if we, right from the very beginning, shut everything down, it may have been a little bit different. But there was a lot of pushback about shutting things down back then.”

A recent Fox News poll showed Trump’s job performance numbers at a record high. The poll said 49 percent approve of the job Trump is doing as president, which is up from 48 percent two weeks ago. Eighty-nine percent of Republicans approve of Trump.

Fauci has faced increasing criticism on conservative radio who see him as a career bureaucrat.

Fauci has slammed the media in the past for attempting to “pit” him against Trump. He was asked in March about reports of their relationship being on the rocks.  He was asked on the radio show “Mornings on the Mall” about questions from the media and how they seem designed at times to “create a rift between you and the president.”

"The president has listened to what I've said and to the other people who are on the task force have said,” Fauci said. “When I've made recommendations, he has taken them. He has never countered, overwritten me. The idea of just pitting one against the other is not helpful. I wish that would stop and that we'd look ahead at the challenge we have to get over this thing."

Fox News' Joseph A. Wulfshon contributed to this report. Get updates on this story from foxnews.com.