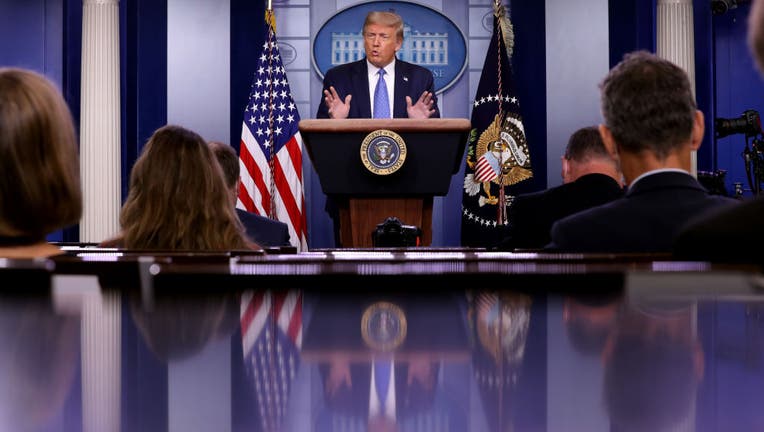 U.S. President Donald Trump talks to journalists during a news conference about his administration's response to the ongoing global coronavirus pandemic in the Brady Press Briefing Room at the White House July 22, 2020 in Washington, DC. (Photo by Ch

WASHINGTON - President Donald Trump highlighted developments with a coronavirus vaccine and lauded what he said were the United States’ COVID-19 testing achievements during a revived task force briefing on Wednesday.

Earlier in the day, Health and Human Services Secretary Alex Azar said that the country had signed a deal with Pfizer for the first 100 million doses of a COVID-19 vaccine, with the president stating during the White House briefing, “I think we have a winner there.”

As of July 22, there were four vaccines in the large-scale efficacy test phase and 13 in expanded safety trials, according to the New York Times’ Coronavirus Vaccine Tracker. Moderna reported that 45 out of 45 patients in an initial trial all developed antibodies from their vaccine.

The president highlighted the benefits of wearing masks, despite his earlier claims that people who wore them were making a political statement.

On Monday, the Associated Press reported that an experimental coronavirus vaccine from Oxford University has been shown in an early trial to prompt a protective immune response in hundreds of people who got the shot.

The president said that on July 22, the United States had surpassed 50 million COVID-19 tests, stating that it was a higher number than any other country in the world. The United States also has the most confirmed cases of COVID-19 in the world with close to 4 million.

"This is another crucial step in our effort to develop, manufacture and distribute a vaccine in record-breaking time," Trump said. "Really, a small fraction of the time, based on previous schedules."

Laboratories across the U.S. are buckling under a surge of coronavirus tests, creating long processing delays that experts say are actually undercutting the pandemic response.

With the U.S. tally of infections at 3.9 million Wednesday and new cases surging, the bottlenecks are creating problems for workers kept off the job while awaiting results, nursing homes struggling to keep the virus out and for the labs themselves, dealing with a crushing workload.

Some labs are taking weeks to return COVID-19 results, exacerbating fears that asymptomatic people could be spreading the virus if they don’t isolate while they wait.

“There’s been this obsession with, ‘How many tests are we doing per day?'” said Dr. Tom Frieden, former director of the Centers for Disease Control and Prevention. “The question is how many tests are being done with results coming back within a day, where the individual tested is promptly isolated and their contacts are promptly warned.”

Frieden and other public health experts have called on states to publicly report testing turnaround times, calling it an essential metric to measure progress against the virus.

The testing lags in the U.S. come as the number of people confirmed to be infected globally passed a staggering 15 million on Wednesday, according to data compiled by Johns Hopkins University. The U.S. leads the world in cases as well as deaths, which stand at more than 142,000 nationwide. New York, once by far the U.S. leader in infections, has been surpassed by California, though that is partly due to robust testing in a state with more than twice the population of New York. 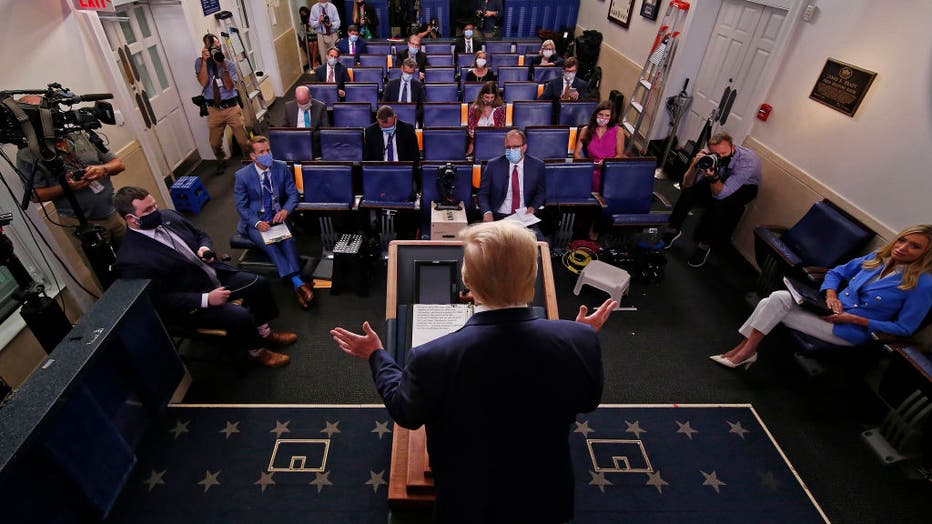 U.S. President Donald Trump talks to journalists during a news conference about his administration's response to the ongoing global coronavirus pandemic in the Brady Press Briefing Room at the White House July 22, 2020 in Washington, DC. (Photo by Ch

In the presser, the president was also asked about a national strategy to help schools reopen safely and whether he would feel comfortable sending his own son and grandchildren back to schools. The president replied that he is comfortable with that and reiterated his desire to see schools reopen.

“We do have a national strategy, but ultimately it’s up to the governors of the states,” Trump said.

The president also remarked on the possibility of children attending school then coming home and potentially spreading the virus to family members, claiming that children don’t easily transmit the virus.

Questions linger regarding children’s role in the coronavirus pandemic

It is still uncertain how much kids are impacted by and are contributing to the spread of the novel coronavirus.

Only about 1 in 10 Americans think daycare centers, preschools or K-12 schools should open this fall without restrictions, according to a new poll from The Associated Press-NORC Center for Public Affairs. Most think mask requirements and other safety measures are necessary to restart in-person instruction, and roughly 3 in 10 say that teaching kids in classrooms shouldn’t happen at all.

The findings are a sharp contrast to the picture that President Donald Trump paints as he pressures schools to reopen. The Republican president claims to have wide support for a full reopening, arguing that Democrats oppose it for political reasons.

Few schools, however, plan to return to business as usual. Many of the nation’s largest school districts have announced that they’ll be entirely virtual in the fall or use a hybrid model that has children in classrooms only a couple of days a week.

As workers return to offices, children prepare to return to schools and those desperate for normalcy again visit malls and restaurants, the emerging science points to a menacing reality: If people who appear healthy can transmit the illness, it may be impossible to contain.

Researchers have exposed the frightening likelihood of silent spread of the virus by asymptomatic and presymptomatic carriers. But how major a role seemingly healthy people play in swelling the ranks of those infected remains unanswered — and at the top of the scientific agenda.

RELATED: More than 15 million people have COVID-19 around the world, according to Johns Hopkins

Trump continued his recent encouragement of Americans to wear masks when social distancing is not possible, despite having seldom worn them in the past.

“Whether you like the mask or not, they have an impact," he said. "I’m getting used to the mask,” he added, pulling one out after months of suggesting that mask-wearing was a political statement against him.

The revived press briefings on the virus come a little more than three months before Election Day. For weeks, White House aides have pressed Trump to grow more disciplined in his public statements about the pandemic.

On Tuesday, Trump steered clear of what has been a favored talking point: that widespread testing for the virus in the U.S. “created” more cases, as aides noted that was false and projected a lack of responsibility.

“The vaccines are coming, and they're coming a lot sooner than anybody thought possible,” Trump said.

In total, more than 15 million people have contracted COVID-19 across the world, with nearly 4 million people in the U.S. alone, according to the July 22 data from the Johns Hopkins Coronavirus Resource Center.

This story was reported from Cincinnati and Los Angeles. The Associated Press contributed.