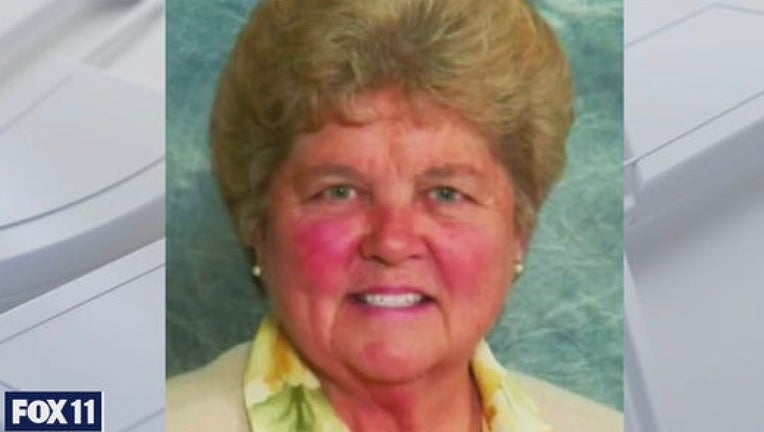 LOS ANGELES - The retired principal of a Catholic elementary school in Torrance, who as a nun took a vow of poverty, pleaded guilty Thursday to federal charges that she embezzled more than $835,000 in school funds to support a gambling habit and pay for other personal expenses after a judge said the case would be a "struggle" because he doesn't view nuns as "ordinary people."

Mary Margaret Kreuper, 80, of Los Angeles, entered her plea to wire fraud and money laundering charges, which together carry a total of up to 40 years in federal prison. U.S. District Judge Otis D. Wright II set sentencing for Feb. 7.

The judge started the plea hearing by telling the court that he was raised as a Roman Catholic, "and was educated by nuns. And I don't look at nuns as ordinary people.''

Wright said from the bench that the case "will be difficult -- but that's the job. Unlike most cases, this one will be a struggle."

Nun accused of embezzling 835K from school in Torrance

The retired principal of a Catholic elementary school in Torrance, who as a nun took a vow of poverty, confessed to fraud and money laundering charges involving the theft of more than $835,000 in school funds to pay for personal expenses, including gambling trips, federal prosecutors announced Wednesday.

He then asked Kreuper, dressed in a flowered blouse, gray hair in a tidy bun, if she had "a problem with me presiding over this matter."

In a soft voice, she responded, "No, your honor."

After Kreuper was charged last month, her attorneys issued a statement saying that Sister Mary Margaret "is very remorseful for what happened. As soon as she was confronted, she accepted full responsibility for what she had done and she has cooperated fully with law enforcement and the Archdiocese."

According to defense attorneys Mark A. Byrne and Daniel V. Nixon, Kreuper became a nun when she was 18 years old, and for the next 59 years "dedicated her life to helping others and educating children in Archdiocesan schools. Unfortunately, later in her life she has been suffering from mental illness that clouded her judgment and caused her to do something that she otherwise would not have done. She is very sorry for any harm she has caused."

In her plea agreement, Kreuper acknowledged that for a period of 10 years ending in September 2018, she embezzled money from St. James Catholic School. As principal -- a position she held for 28 years before she retired – Kreuper was responsible for the money the school received to pay for tuition and fees, as well as for charitable donations, according to the document filed in Los Angeles federal court.   Kreuper controlled accounts at a credit union, including a savings account for the school and one established to pay the living expenses of the nuns employed by the school, prosecutors said.

Kreuper diverted school funds into the St. James Convent Account and the St. James Savings Account and then, as she admitted in her plea agreement, used the diverted funds "to pay for expenses that the order would not have approved, much less paid for, including large gambling expenses incurred at casinos and certain credit card charges."

Kreuper further admitted that she falsified monthly and annual reports to the school administration to cover up her fraudulent conduct and "lulled St. James School and the administration into believing that the school's finances were being properly accounted for and its financial assets properly safeguarded, which, in turn, allowed defendant Kreuper to maintain her access and control of the school's finances and accounts and, thus, continue operating the fraudulent scheme."

Kreuper admitted that, over the course of the scheme, she caused losses to St. James Catholic School totaling $835,339, according to the U.S. Attorney's Office.

Asked how she pleaded to the charges, the defendant quietly said, "Guilty, your honor."

The judge advised Kreuper that he would expect her to make a statement at sentencing, and added, "I don't have to worry about b.s. coming from you."