TOKYO - The Tokyo Olympics will allow some local fans to attend when the games open in just over a month, organizing committee officials and the IOC said on Monday.

Organizers set a limit of 50% of capacity up to a maximum of 10,000 fans for all Olympic venues.

The Tokyo Games are set to open on July 23.

Local organizing committee president Seiko Hashimoto said it was important to acknowledge the uncertainty around the pandemic during the games.

"We need to be very flexible. If there is any abrupt change in the situation, we will hold five-party meetings again to make other decisions," Hashimoto said. "If there is an announcement of a state of emergency during the games, all the options like no-spectator games will be examined." 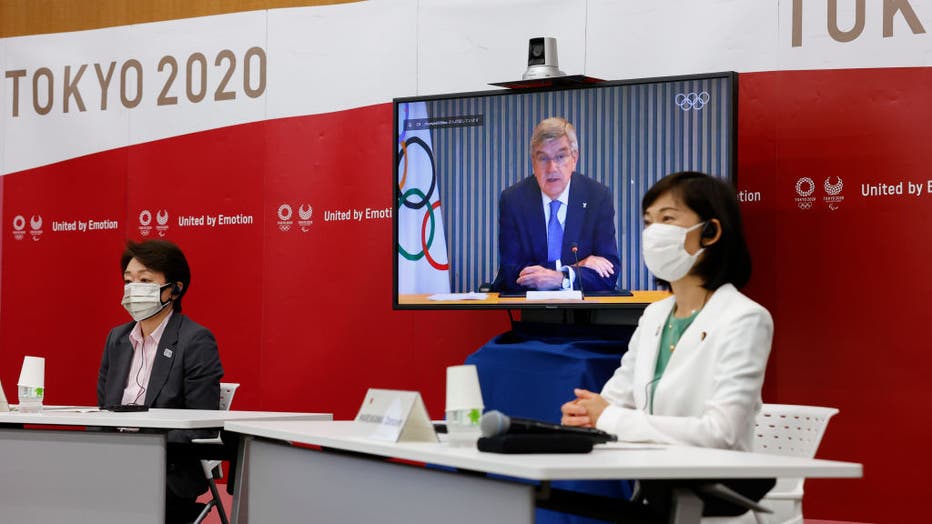 TOKYO, JAPAN - JUNE 21: (L-R) Seiko Hashimoto, President of Tokyo 2020, Thomas Bach (on a screen), IOC President, and Tamayo Marukawa, Minister for the Tokyo Olympic and Paralympic Games, speak during a five-party meeting at the Tokyo 2020 headquarte

Fans from abroad were banned several months ago. Officials say local fans will be under strict rules. They will not be allowed to cheer, must wear masks, and are being told to go straight home afterward.

Organizers say between 3.6-3.7 million tickets are in the hands of Japanese residents.

Having fans in the venues presents a risk of spreading the COVID-19 infections, and not just at the venues, since it causes more circulation on commuter trains, in restaurants and other public spaces.

Tokyo and other areas are under "quasi-emergency" status until July 11. This replaced a tougher full state of emergency that was in effect until last weekend. The new rules will allow restaurants to serve alcohol during limited hours.

Prime Minister Yoshihide Suga, who has favored allowing fans, said before the official announcement that he would bar fans if conditions change.

"If a state of emergency is necessary, I will be flexible and open to no fans in order to achieve that the games give top priority to safety and security for the people," Suga said. "In case of a state of emergency, it is quite possible ... for safe and secure (games) I will not hesitate to have no fans."

He said he took "seriously" Omi’s recommendations but did not follow them.

Tokyo Governor Yuriko Koike also said before the talks that fans may need to be banned if conditions changes.

"Under this COVID-19 pandemic, people in Tokyo, people in Japan, are feeling very uneasy. We have concerns and the experts are also making recommendations about the risk of spreading the infection," Koike said. "If there should be a major change in the sanitary situation or infection situation, we need to revisit this matter among ourselves and we may need to consider the option of having no spectators in the venues."

In recent polls, support seems to be increasing for holding the Olympics, though opposition is strong, depending on how the question is worded. An Asahi newspaper poll of June 19-20 of almost 1,500 people showed 62% supported another postponement or cancellation of the games. But about one-third supported holding the Olympics, up from 14% in May in the same poll.

In the same survey, 83% said they "feel uneasy" that the Olympics might spread the virus. The poll said 53% wanted no fans and 42% said attendance should be limited.

The seven-day average for new infections in Tokyo is about 400 daily. The curve has flattened but health officials fear the Olympics and new variants will drive it up.

About 6.5% of Japanese are fully vaccinated, and 16.5% have had at least one shot, according to figures from the prime minister’s office. More than 14,000 deaths in Japan have been attributed to COVID-19.

RELATED: Tokyo Olympics: Lancet calls for ‘global conversation’ on whether to cancel