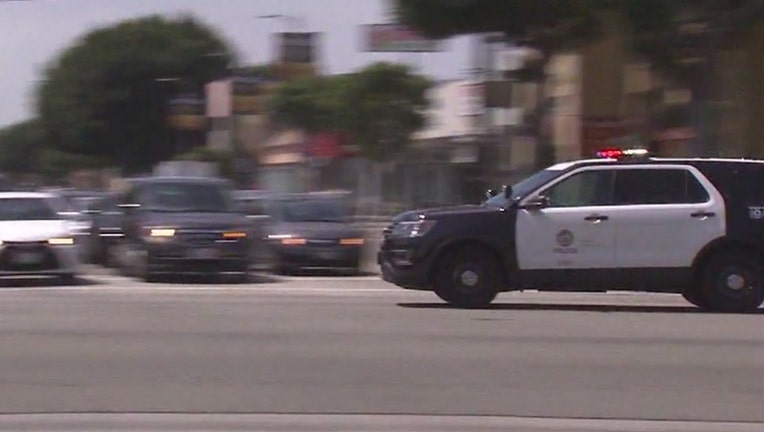 LOS ANGELES - Three Los Angeles Police Department officers pleaded not guilty on Tuesday to charges that they falsified records that claimed people they had stopped were gang members.

Rene Braga, 40, Raul Uribe, 35, and Julio Garcia, 36, were charged last October, less than three months after three other officers who had also worked at the LAPD's Metropolitan Division -- Braxton Shaw, Michael Coblentz and Nicolas Martinez -- were charged with similar crimes.

Braga, Uribe and Garcia are accused of falsifying field interview cards that were used by officers to conduct interviews while they were on duty, according to the Los Angeles County District Attorney's Office.

Some of the false information on the cards was used to wrongfully enter the names of people into a state gang database, according to prosecutors.

The three are accused of writing on a field information card that a person admitted being a gang member even though body-worn camera video showed they either never asked the individuals about gang membership or that the people had denied gang membership when they were asked.

Braga is charged with one count each of filing a false police report and preparing false documentary evidence, and could face a maximum of three years and eight months in county jail if convicted as charged.

Uribe and Garcia are charged with one count each of preparing false documentary evidence and could face up to three years in jail if found guilty.

The three were released on their own recognizance within less than three hours after being arrested last Oct. 2 by investigators from the Los Angeles Police Department's Internal Affairs Division.

Meanwhile, Shaw, 38, Coblentz, 43, and Martinez, 37, are also free on their own recognizance while awaiting arraignment on May 20 in a downtown Los Angeles courtroom.

• State to review LA police use of California gang database

Shaw could face up to 31 years and eight months in county jail if convicted of 43 counts of preparing false documentary evidence involving the field interview cards, along with eight counts of filing a false report and one count of conspiracy.

Coblentz allegedly falsified seven field interview cards. He is charged with seven counts of preparing false documentary evidence, five counts of filing a false report, and one count of conspiracy, and could face up to seven years and eight months behind bars if found guilty.

Martinez -- who allegedly falsified two field interview cards -- is charged with two counts each of preparing false documentary evidence and filing a false report and one count of conspiracy, and could face a maximum of four years and four months in jail, according to the District Attorney's Office.

In a statement posted on Twitter after Shaw, Coblentz and Martinez were charged, LAPD Chief Michel Moore said, "Public trust is the bedrock of community policing and these allegations shake that foundation. The actions of these few tarnish the badge we all wear. The department is committed to continuing this comprehensive investigation in our effort to restore the confidence of the people we protect and serve."

Those charges stemmed from a "misconduct investigation" conducted by the LAPD's Internal Affairs Group and monitored by the Office of the Inspector General, according to the department.

The LAPD said at the time that there were 21 other officers under investigation over the completion of field interview cards, which are used by officers to interview people while they are on duty.

The LAPD was investigating alleged misuse of the CalGang system, a statewide database used by law enforcement for sharing intelligence regarding potential gang members, after it was announced in January 2020 that a teenager with no gang affiliations was entered into the system.

RELATED: LAPD places a moratorium on the use of CalGang System

California Attorney General Xavier Becerra announced the following month that his office would audit the department's records and policies on the use of the database.

The LAPD subsequently placed a moratorium on the use of the CalGang System.