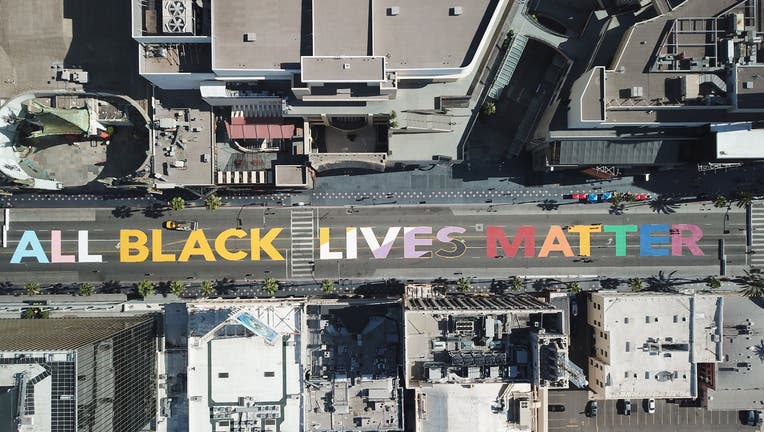 HOLLYWOOD, Calif. - Several thousand people turned out Sunday for an anti-racism solidarity march from Hollywood to West Hollywood, a city that was originally set to host the LA Pride Parade on this day before it was canceled due to the coronavirus.

Several thousand people turned out Sunday for an anti-racism solidarity march from Hollywood to West Hollywood, a city that was originally set to host the LA Pride Parade on this day before it was canceled due to the coronavirus.

It was a behemoth of a march, thousands and thousands of people marching from Hollywood and Vine to Santa Monica and San Vicente.

The march was organized by the All Black Lives Matter Advisory Board, which posted on its website the protest was “in direct response to racial injustice, systematic racism and all forms of oppression."

The group of African American LGBTQ+ organizations united what would have been the huge presence of people from COVID-19 postponed the Gay Pride celebration, with the impetus of recent BLM protests, putting together an event that seemed to satisfy initial concerns that Pride organizers might not include the BLM message fairly.

As of 12:30 p.m., the crowd had swelled on Hollywood Boulevard, which was painted with large all-capital letters spelling out ALL BLACK LIVES MATTER. The popular tourist thoroughfare was closed to vehicle traffic from Highland Avenue to La Brea Avenue.

As it was, a portrait of George Floyd, the African-American man killed by police in Minneapolis, flashed on a screen outside the Chinese Theatre, while chants echoed in the crowd: “Black Lives Matter” but also “LatinX for Black Lives” even “Black Trans lives matter”.

The majority of marchers we encountered were wearing masks, but just the sheer size of the group, and the gatherings before, and after, made some wonder if perhaps the Gay Pride Festival shouldn’t have been postponed.

At the same time, many of the people marching were heterosexuals wanting to add their voices to a call for justice they now perceive as universal. 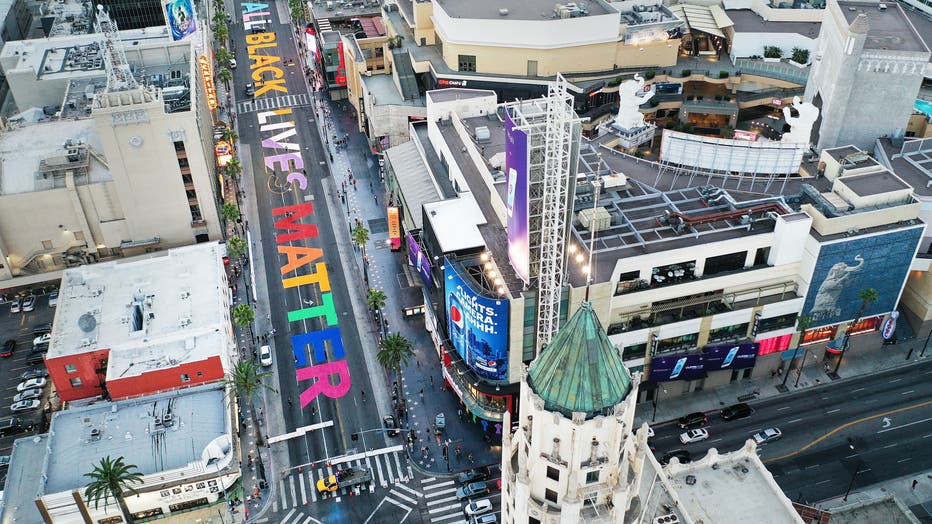 Organizers of the 2020 LA Pride Parade, who canceled their event due to the coronavirus pandemic, said earlier this month they would hold a march in solidarity with Black Lives Matter and against police brutality and oppression.

But Christopher Street West, which organizes LA Pride, failed to reach out to BLM officials or Black LGBTQ community organizers before making that announcement.

"They just kind of stepped forward too soon without checking with and getting the full endorsement and support from Black LGBTQ leaders ... and organizations,'' said ABLM organizer Brandon Anthony.

CSW admitted as much in a social media post Monday, saying the group
would withdraw from formal sponsorship of the anti-racism event, but stand in solidarity.

According to a website for the march, ablm.la, the LA Pride organizers stepped back "out of recognition and respect to the years of work and action of Black LGBTQ+ leadership and community organizers,'' but would "stand unapologetically in solidarity with efforts to dismantle racial (in)justice, systemic oppression, institutional barriers, policy brutality and discrimination of all kinds.''