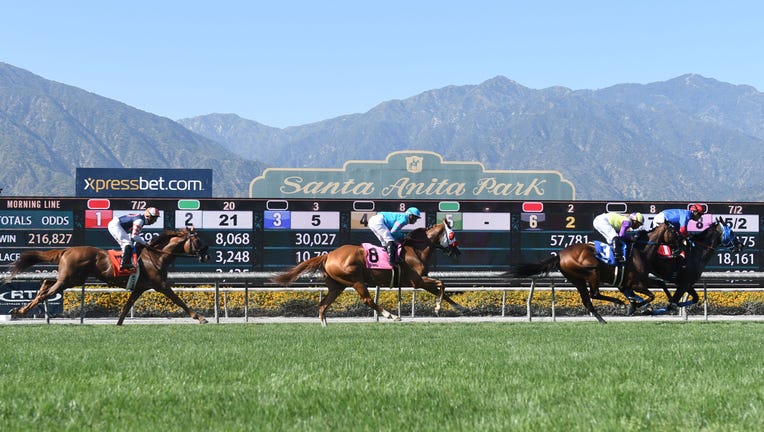 ARCADIA, CA - JUNE 23: Horses on the turf track for the San Juan Capistrano Stakes on the last day of the Winter-Spring Meet on June 23, 2019, at Santa Anita Park in Arcadia, CA.(Photo by Cynthia Lum/Icon Sportswire via Getty Images)

ARCADIA, Calif. - Three horses have died in three days at Santa Anita Park while animal rights activists continue to push for a nationwide ban on racing.

Santa Anita officials confirmed that a horse, which had been training at the track this morning, died Sunday, but they declined to immediately share more details.

On Saturday, a 4-year-old gelding named Uncontainable was entered in the first race of the day, but suffered a "fractured right front ankle,'' according to a post on Santa Anita's website. "Per recommendation from the attending veterinarian, the horse was humanely euthanized.''

A day earlier, on Friday, a 6-year-old gelding named Harliss was euthanized after fracturing his right front ankle in a race at Santa Anita after finishing seventh in a field of eight in the seventh race. He was also euthanized under the recommendation from the attending veterinarian.

The three combined deaths in consecutive days brought the number of horse deaths at Santa Anita to at least 42 since December 2018. Five horses have died at Santa Anita since its winter/spring meeting began Dec. 28.

"Three dead horses in three days requires immediate action,'' PETA spokeswoman Brooke Rossi said. "The California Horse Racing Board was recently given the authority, in legislation backed by Gov. Gavin Newsom, to suspend racing, and now it must do exactly that. There is no sense in the board allowing racing and deaths to continue until it enacts all its own pending regulations and acts on the recommendations of the Los Angeles County District Attorney's office. If it takes the closure of a track to stop the deaths, then close the track.''

"Santa Anita remains committed to transparency,'' it said. "Our safety statistics and incident reports are publicly available on our website at SantaAnita.com/safety. Home to 2,000 horses, Santa Anita Park is one of the largest equine training facilities in the United States. Horses raced or trained at Santa Anita Park more than 420,000 times over the last year with a 99.991% safety rate.''

Santa Anita -- and the sport in general -- have faced increasing pressure from animal-rights activists and elected officials since the deaths at Santa Anita started garnering media attention in early 2019. The California Horse Racing Board is set to issue a report soon on the deaths.