The Grinch who stole Halloween in Inglewood

An Inglewood couple is hurt and puzzled after someone ruined their elaborate Halloween display.

INGLEWOOD, Calif. - It took nearly a day for Kristen and Scott Bedno to assemble their elaborate Halloween wonderland complete with ghosts, skeletons, and giant spooky inflatables.

“This was something that was set up to help others to spread joy and cheer, and instead we’ve got a little Halloween ‘grinch’ that’s taken from all of us,” said Kristen, standing where a large inflatable winged cat stood just the day before.

“All of the neighbors all day long have been stopping, saying hey, I’m so sorry to hear this - my kids loved this, my granddaughter loved this. We’re just heartbroken for you.”

The Bednos moved into their Inglewood home about eight months ago, and were overwhelmed by the incredibly warm welcome they received.

“Immediately everybody was going ‘hi,’ how are you? I’m so-and-so. Welcome to the neighborhood - if you need anything, please let us know,” Kristen said.

Having collected plenty of spooky Halloween decorations over the years, they decided to create a one-of-a-kind display to give back to the community that had been so kind to them. Kristen said it quickly became a neighborhood go-to.

“It was this really exciting community thing where it was bringing everybody together, neighbors were talking on the streets. Suddenly we were getting to know more people and we felt like we were giving back.”

“The kids in the neighborhood and the families started coming by, and they were taking pictures with the unicorn and the big cat and the little kids were coming up and petting the cat,” Kirsten said.

The Bednos had been deflating the giant car and pumpkin-holding unicorn at night so as not to disturb their neighbors with the lights. When they woke up on Sunday morning and tried to bring their display back to life, nothing happened.

“I came outside and thought - yep, I’ll be darned - somebody stole them!”

Their Nest camera picked up some movement and noise at 4 a.m, but a ghost hanging from the porch blocked it from picking up any video of the thief. 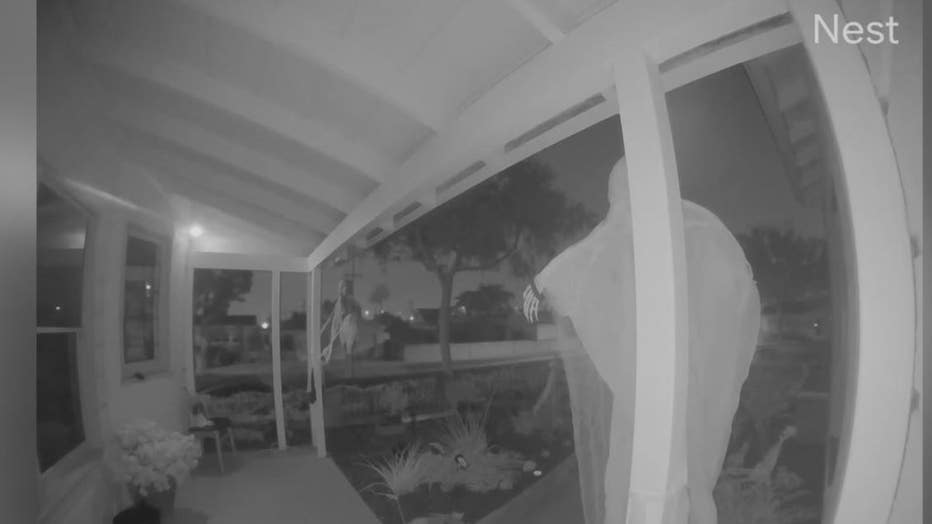 But it did capture the sound of cords being ripped out and the display being trashed.

The Bednos decided to put up a sign imploring the thief to bring their decorations back. There has since been an outpouring of support from their neighbors.

They have one simple request for the Halloween grinch:

“Just place them back where you found them on the lawn, and we’ll all walk away from it, and the kids can enjoy Halloween again,” said Kirsten.