Texas school shooting: Onlookers urged officers to charge school while gunman was inside

Onlookers say they urged responding officers to charge the school as the 18-year-old gunman was inside killing people in one classroom. The massacre lasted about 40 minutes before the shooter was killed.

The gunman who killed 19 students and two teachers in the Uvalde mass shooting told a classroom of children that "it’s time to die," according to a fourth-grader who survived the attack.

The chilling words allegedly uttered by Salvador Ramos inside Robb Elementary on Tuesday were revealed by a 9-year-old who spoke to KENS 5, describing how he hid under a table during the shooting rampage.

RELATED: Who is Salvador Ramos? What we know about Texas elementary school shooting suspect

"He shot the next person’s door. We have a door in the middle. He opened it. He came in and he crouched a little bit and he said, 'It's time to die,'" the student told the station. "When he shot, it was very loud and it hurt my ear."

The student said when he first heard gunfire coming from outside the classroom, he turned to his friend and told him "to hide under something so he won't find us."

"I was hiding hard. And I was telling my friend to not talk because he is going to hear us," the student told KENS 5.

The boy and four other students reportedly took cover underneath a table that had a tablecloth on it.

"When the cops came, the cop said: 'Yell if you need help!' And one of the persons in my class said 'help,’" the student recalled. "The guy overheard and... shot her." 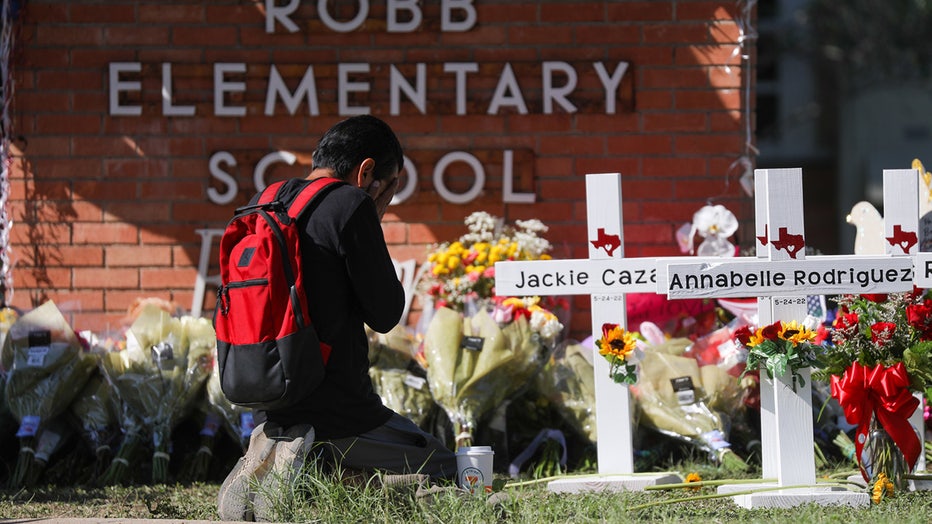 A man prays in front of a makeshift memorial outside Robb Elementary School in Uvalde, Texas, on May 25, 2022. (Photo by Yasin Ozturk/Anadolu Agency via Getty Images)

'What are we doing?': Sen. Chris Murphy begs for gun control after Texas shooting

The student says the officer then "barged into that classroom."

"The guy shot at the cop," he said. "And the cops started shooting."

Handling traumatic grief and coping after a national crises

After 21 lives were taken in a Texas school, LiveNOW from FOX talks with a grief counselor on how to cope, talk with your children and offer support to those in need.

During the ordeal, the student said his teachers Irma Garcia and Eva Mireles – the two who were killed in the shooting – "went in front of my classmates to help, to save them."

After Ramos was killed by a Border Patrol officer, the student said he "opened the curtain" over the table "and I just put my hand out."

"I got out with my friend. I knew it was police," he said. "I saw the armor and the shield."