Utility companies were scrambling to restore power to thousands of residents across Los Angeles County&nbsp;as the region was record-breaking temperatures&nbsp;over the weekend.&nbsp;

LOS ANGELES - The holiday heat wave is taking a toll on the Southern California power grid with more than 90,000 Southern California Edison and LA Department of Water and Power customers without power Monday and electricity for some not expected to be restored until Tuesday.

Fire, heat, smoke -- What could make the situation worse? If your power goes out. And unfortunately that's happening all over.

The DWP reported at 9 p.m. Sunday that its crews had restored power to 77,000 customers since the extreme heat storm started causing problems on Saturday. But crews were working to restore power to some 70,000 customers by repairing overheated and overloaded distribution equipment.

Neighborhoods most affected by the power outages included Highland Park with 12,000 customers, Mid Wilshire with 5,100, Sylmar with 4,500 and Studio City with 3,700. The DWP warned some customers might be without electricity for 24 to 48 hours. 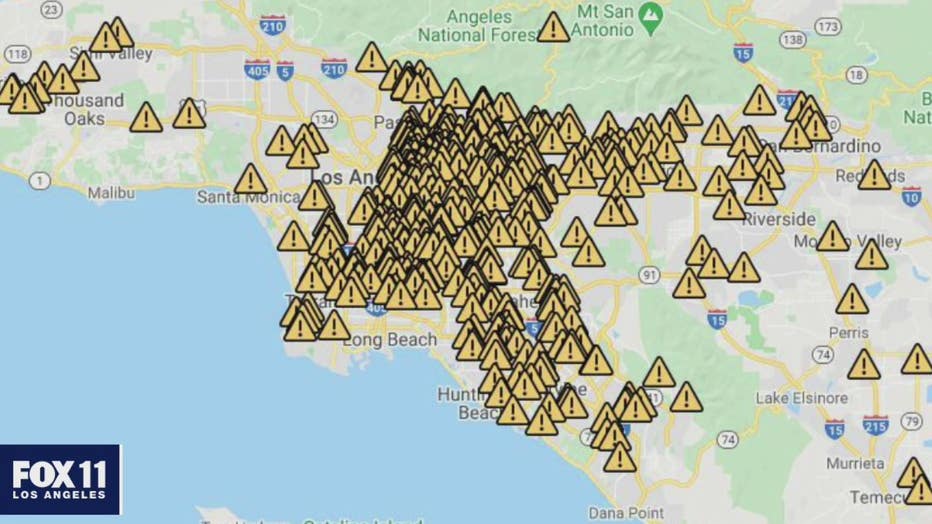 The DWP urged people to set air conditioners to 78-82 degrees and "skip laundry and heavy appliance use."

Newsom said the state has already taken the following actions to free up capacity:

• Working with large commercial and public energy consumers to shift their energy usage away from peak hours;

• Ramping up appeals to Californians to flex their power, pre-cool their homes before noon and conserve energy from 3 p.m. onward;

• Asking the Navy and commercial ports to use on-ship electrical generation instead of pulling resources away from the grid.

At about 6 p.m. Sunday, the California Independent System Operator, which oversees the state's bulk electric power system and it utility companies, declared a Stage 2 Emergency, announcing its operators were "taking all the steps to protect the grid, manage transmission loss and avoid outages."

A Stage 2 Emergency means "the CA ISO has taken all mitigating actions and is no longer able to provide its expected energy requirements. A Stage 2 warning requires ISO intervention in the market, such as ordering power plants online," according to the agency's website.

The Stage 2 Emergency was lifted  just after 9 p.m. However, the flex alert will continue Monday from 3 p.m. through 9 p.m.

Temperatures set new records around Southern California Sunday, including 121 degrees at Pierce College in Woodland Hills, which broke a 2006 record of 119; Van Nuys hit 118 degrees, breaking a record of 117 set in 2018; and the high of 114 degrees at Burbank Airport tied a previous record set Saturday.

An excessive heat warning issued by the National Weather Service will be in effect until 8 p.m. Monday in the San Gabriel and Santa Monica mountains, Santa Catalina Island and the San Fernando, Santa Clarita, San Gabriel and Antelope valleys as well as Orange County.

Cooling centers will be open throughout the weekend in Los Angeles and Orange counties.  They can be found at https://ready.lacounty.gov/heat/, and www.211oc.org/resource-centers/extreme-heat-cooling-centers.html.

For more info about rotating outages go to sce.com/rotatingoutage  and sce.com/outage center for information about outages across the service area.