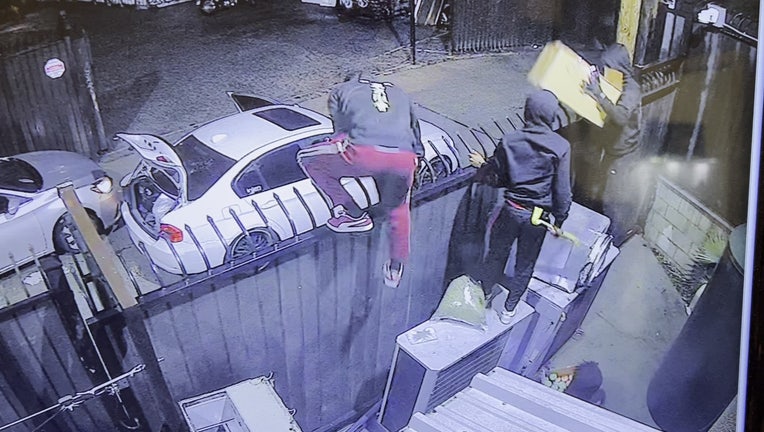 Thieves jumping a fence behind a dispensary with stolen merchandise.

LOS ANGELES - The search is on for a group of thieves who were caught on surveillance camera breaking into a dispensary in the Silver Lake area of Los Angeles overnight.

Silver Lake Caregivers Group reported the burglary around 12:30 a.m. on Wednesday. Surveillance video from the store shared with FOX 11 showed three people, all in black hoodies, using crowbars to pry open the back door to the facility. Once inside, the thieves are seen clearing the shelves of black bags.

The group then leaves out the back, meeting up with at least three others driving two separate silver or white-colored four-door cars. The three who made it into the store are seen throwing bags over the fence to their friends while jumping the fence themselves.

Thieves jumping a fence behind a dispensary with stolen merchandise.

The group shoved the stolen merchandise into the trunks of the two cars. As the one car drove off, one of the thieves was seen trying to close the trunk of the other car, and failing. The two tried to close the trunk again, before giving up and driving off.

The owner of Silver Lake Caregivers group told FOX 11 that they've filed a report with the Los Angeles Police Department, but didn't confirm how much was stolen.

Anyone with information about the crime should call the Los Angeles Police Department.